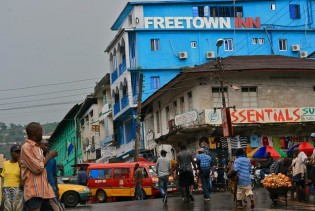 By Lahai J. Samboma
The international community must move swiftly to create a regional political framework to tackle continuing civil strife in Zaire before it spreads a wider conflagration across the entire Great Lakes region, experts here say.

By Lahai J. Samboma
An Amnesty International spokeswoman has condemned plans by the Sierra Leone government to grant a South Africa-style blanket amnesty for human rights violations committed during the years of bloody civil strife.

GAMBIA: Cautious Eyes On Gambia As Election Process Gets In Gear

By Lahai J. Samboma
Tall and slim and smartly-dressed, with a bushy head of hair and equally bushy beard, all that remained for Ibrahima Njie to look the part of a griot -- or traditional West African praise-singer -- was a long, flowing African dress.

By Lahai J. Samboma
New pressure on traditionally secretive Swiss banks to open their books has raised hope that the millions plundered and stashed in their vaults by corrupt African dictators and their bureaucrats could be returned to their home countries.

LIBERIA-HUMAN RIGHTS: Peace – and Rights – Should be Focus

By Lahai J. Samboma
Lasting peace will only be achieved in war- ravaged Liberia when the issue of human rights abuses against unarmed civilians by various armed factions is addressed in a comprehensive way, campaigners here say.

BURUNDI: Sackings Of Army Chiefs May Not End Massacres – Amnesty

By Lahai J. Samboma
Amnesty International said Friday that the order from Burundi's new president Pierre Buyoya to sack army chiefs implicated in inter-ethnic massacres was no guarantee that human rights abuses by the army will stop.

By Lahai J. Samboma
Economic sanctions imposed on Burundi by its neighbours are having a crippling effect on the country, and relief agencies fear they could precipitate violence against their staff as looters try to get at their stockpiled supplies.

UGANDA: War On Northern Insurgents In Danger Of Alienating Locals

By Lahai J. Samboma
Kampala's battle to stop insurgents crossing over from Sudan and wreaking havoc in northern Uganda could alienate locals caught in the crossfire unless it is promptly followed by with political concessions to the region's minorities.

By Lahai J. Samboma
Africa's stock as a destination for foreign investment has risen modestly in recent years, but some analysts think enterprises in need of fixed cash capital are being bypassed in the race for a fast buck on Africa's emerging equity markets.

By Lahai J. Samboma
Angolan rebels are grossly violating the Lusaka peace accords, say campaigners who are calling on Western governments to apply concerted pressure on Jonas Savimbi and his rebel army to abide by the protocols of the 18-month-old truce.

By Lahai J. Samboma
Her hair dishevelled, eye-shadow blackened tears slowly streaming down her face, Baindu Bangura cut a sad figure as she sat quietly with hands folded across a matronly chest. Mourners steadily occupied the chairs around her.

By Lahai J. Samboma
Foreign direct investment in Africa could be considerably boosted if the World Bank affiliate responsible for political risk insurance in developing countries increased its portfolio involvement in the region, investors and analysts say.

By Lahai J. Samboma
The European Union has been accused of hobbling South Africa's post-apartheid reconstruction by vacillating on whether or not to remove barriers to products from that country.

By Lahai J. Samboma
Guess who's coming to dinner -- and at the Queen's too? Only a man once dubbed a 'terrorist' by the British establishment, who just a few years ago would have been persona non grata in Britain -- had he not been imprisoned for all of 27 years.

By Lahai J. Samboma
The methods being used by Western govern- ments to pressure Tanzania into intervening to end a protracted political crisis on Zanzibar, were criticised here this week as being ippropriate and likely to fail.

By Lahai J. Samboma
The international financial institutions (IFIs) and the Paris Club of bilateral creditors must do more to help Africa out of its debilitating debt crisis, says a senior Commonwealth official.

By Lahai J. Samboma
A former African economics minister is calling for an international inquiry to be instituted to decide whether the billions of dollars of African debt owed to international creditors should be repaid at all.
Next Page »
ADVERTISEMENT ADVERTISEMENT