This is part of a series of features and op-eds to mark World Press Freedom Day on May 3. 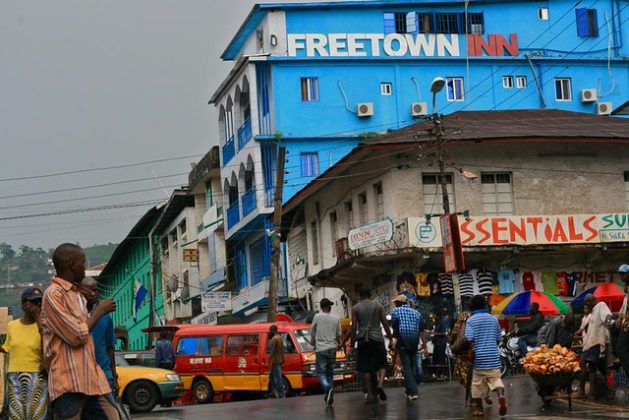 LONDON, May 2 2019 (IPS) - Ibrahim Samura, erstwhile editor and publisher of New Age, an independent Freetown newspaper, was beaten up with “heavy-duty metal chains and sticks” during Sierra Leone’s presidential run-off election in March 2018—in front of the police and army. He died from his injuries three months later. But more than a year since the assault the perpetrators are yet to be brought to book.

The Sierra Leone Association of Journalists (SLAJ) has called on the government of President Julius Maada Bio for the immediate prosecution of all those who physically assaulted a newspaper editor last year.

The attack on Samura and at least two other reporters occurred in full view of security personnel, as the journalists covered the elections no more than 50 feet from the police station in the Freetown suburb of Lumley.

“The continuing delay in bringing them to justice is breeding a culture of impunity,” Ahmed Sahid Nasralla, the national secretary general of SLAJ, told IPS. “We are calling on the police and on the government to take action. The investigation has been done. It’s up to the authorities to now prosecute. We will continue to put pressure on them to do so.”

According to SLAJ, Samura’s death is directly related to the beating he received, which caused the intracerebral haemorrhage the autopsy determined caused his death. Further, medical experts say if Samura did not suffer “similar blunt force trauma about the head” from the time of that merciless beating to the time of his death, then it is “very safe” to conclude that those who beat him in March caused his demise.

the chairman of a local football club who was vying for the presidency of the national football association, Sanusi Kargbo;

and, last but not least, Dankay Koroma, who happens to be the daughter of then President Ernest Bai Koroma.

Ten months after the journalist’s death, none of the infamous “Samura Five” have been arrested. This is despite the fact that police say the necessary warrants had been issued. Some reporters have attributed this to the fact that before his death Samura had publicly accepted an “apology” from the APC, in effect offering “pre-emptive forgiveness” to those who some see as his murderers.

But, as the publisher of Sierra Express Media, Adeyemi Paul, said: “He may have forgiven them, but a crime is a crime. The role of the police and the courts is to arrest and prosecute criminals, not to offer forgiveness.” Not unexpectedly, most journalists share this view. Amara Samura (no relation), editor of The Vision newspaper, said: “Those who beat Ibrahim Samura should be brought to justice, because that beating caused his death – apology or not.”

Fayia Amara Fayia of the Standard Times newspaper, said there were rumours Samura had accepted “compensation” from ex-President Koroma, whose daughter was one the alleged attackers. “Journalists should not enter into such arrangements with their abusers, because it will lead to impunity,” he said.

Many journalists who had hoped the election of Bio as president augured well for press freedom in Sierra Leone have been disappointed. The harassment, intimidation and beatings of journalists has continued under the rule of his Sierra Leone People’s Party (the SLPP). Barely a month after Bio assumed office, SLPP supporters assaulted Yusuf Bangura, a radio reporter for the Sierra Leone Broadcasting Corporation (SLBC). His attackers said it was “payback” for his “negative reporting” of the SLPP and Bio in the run up to the elections.

Then last September, Fayia Amara Fayia was arrested at the television studio of AYV Media during a live broadcast. His arrest was ordered by the deputy information minister, who claimed the reporter had libelled the president in one of his articles. Fayia was later released without charge. That same month several journalists were attacked and their equipment damaged by alleged SLPP thugs while covering a bye election in the northern Kambia district.

In January of this year the editor of Sierra Express media, Alusine Bangura, was beaten up at his office by men who, he says, not only identified themselves as supporters of the SLPP, but were also wearing t-shirts emblazoned with the ruling party’s emblem. He suffered serious injuries to his head and torso from the beating the group dished out to him. Three of his colleagues had been lucky to escape.

“I recognised one of the men, a hefty bloke, a popular thug for the SLPP,” Bangura told IPS. “There were about 13 of them. Had it not been for the guys in the area, who came to assist me, I might have been killed.”

According to Bangura, this was the second attack on their offices. The first one happened in April 2018, just after Bio took office. “They attack us because they say we are too critical of the government,” he continued. “They also said we criticised them when they were in opposition. But that is our duty, to keep the politicians on their toes. We are always critical of government, any government.”

These attacks against journalists going about their lawful business can be seen as evidence of a culture of impunity which the continuing failure to prosecute the alleged killers of Samura has fuelled in Sierra Leone. Many believe that if a precedent is set, where people are punished for attacking journalists, it would serve as a deterrent to these almost pedestrian assaults on journalists who are simply doing their jobs. As Bangura said, “I myself could have easily been killed in January by those thugs.”

It will be recalled that Harry Yansaneh, the acting editor of For Di People newspaper, was killed in 2005 after an SLPP MP, Fatmata Hassan, sent her children and assorted thugs to beat him up. In this case, which is eerily similar to Samura’s, the killers got-off scot-free. It can even be argued that Samura might be alive today, or that Bangura might not have sustained those serious injuries, if Yansaneh’s alleged killers had been convicted back in 2005 of even the lesser charge of manslaughter or, at worst, aggravated assault.

Perhaps one reason why the present SLPP government is reluctant to prosecute Samura’s killers is because it will mean not only that they would have to also prosecute their own supporters who routinely beat up journalists, as we have seen, but also those who killed Yansaneh in 2005, there being no statute of limitation for murder.

But the president would do well to recall his words to members of the SLAJ when he addressed them last December. Bio had said: “I would like us to remember the heroism of someone who is not here with us tonight – Ibrahim Samura… Never again should we have a government or politicians who abdicate their duty to protect journalists and become the perpetrators of violence against journalists.”

A month after the president said this, thugs severely beat up the editor of Sierra Express Media. They then ran away—and live to assault another journalist another day.
As SLAJ calls on the government of President Bio for action against the so-called “Samura Five”, its members are also looking to the government to fulfil their manifesto promise to repeal criminal libel laws, which previous governments have used to muzzle the press and to punish outspoken journalists like Kamara.

Speaking to IPS from South Africa, Angela Quintal, Africa Programme Coordinator at the Committee to Protect Journalists (CPJ), said: “President Bio must move swiftly to ensure that the law on criminal and seditious libel is finally repealed, something that he committed to when he came into power last year.”

Quintal added: “A message must also be sent that attacks on journalists will not be condoned by authorities and the only way to ensure this is to ensure that those responsible [for Samura’s death] are held accountable through prosecution. President Bio has publicly committed to upholding press freedom and this is one way to show that his sentiments are not mere rhetoric.”