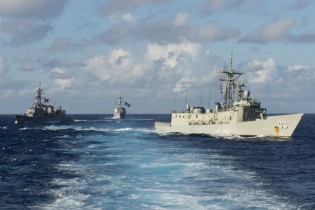 OP-ED: The Elephant vs. the Shark

By Lawrence Wilkerson
To pivot, according to the venerable Oxford English Dictionary, means “to turn as on a pivot.” Which takes us to the noun, which seems more appropriate for describing the Obama administration’s Pacific policy: “That on which anything turns; a cardinal or central point.”

By Lawrence Wilkerson
Now that we have heard Secretary of State John Kerry's emotional plea for us to believe the still rather ambiguous intelligence on chemical weapons use in Syria, there are far more substantive answers to be sought from the Obama administration.
ADVERTISEMENT ADVERTISEMENT