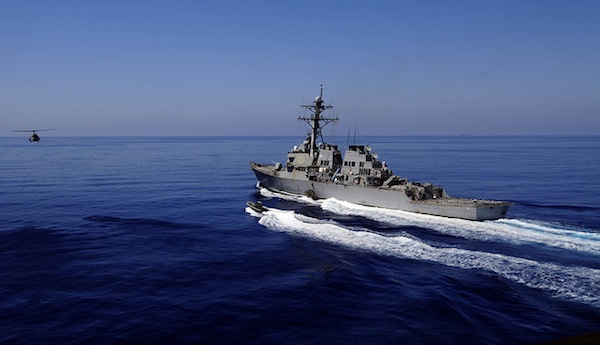 A U.S. strike on Syria could be launched from navy destroyers in the Mediterranean. Credit: Official US Navy Imagery/CC by 2.0

WASHINGTON, Aug 30 2013 (IPS) - Now that we have heard Secretary of State John Kerry’s emotional plea for us to believe the still rather ambiguous intelligence on chemical weapons use in Syria, there are far more substantive answers to be sought from the Obama administration.

Putting aside the remaining ambiguities as well as all the experience those of us over 60 years old have with any administration’s unequivocal assurances preceding its use of military force, the basic context surrounding that use against Syria still requires intense analysis.

Forget about those prematurely-born babies stripped from their cradles in the maternity wards in Kuwait, later demonstrated as a figment of war advocates’ vivid imaginations; forget about the utter certainty with which every principal in the G. W. Bush administration assured Americans of Saddam Hussein’s WMD; and forget about for a moment John Kerry’s overly emotional remarks about Syria. Just examine some pertinent facts.

First, tens of thousands of North Koreans have died from hunger imposed by at least two of the latest DPRK dictators.  Is dying of hunger somehow better than dying of chemicals?  Or might it be that the DPRK has no oil and no Israel?  Of course, there are other examples of dastardly dictators and dying thousands; so where does one draw the line of death in future?

Second, how does one surgically strike Syria, as the Obama administration asserts it wishes to do?  That is, to use military force without becoming a participant in the ongoing conflict, simply to send a signal that chemical weapons use will not be tolerated?

Kosovo is a lousy example – where the promised three-days-of-bombing-and-the-dictator-will-cave turned into 78 long days and a credible threat of ground forces before he actually did cave. Not to mention all the death and destruction wrought by Serbia while much the same was being hurled at it.

Libya is a lousy example because Libya is now a haven for al-Qaeda and next-door-neighbour Mali is destabilised because of it.  Libya itself is hardly stable – except in the eyes of those who no longer want to look at it. Of course the light sweet crude seems to be getting out and to the right people…

Egypt is dissolving; Iraq is returning to civil war; Lebanon is becoming destabilised by the refugees pouring into it from Syria; Jordan is looking dicey having absorbed countless Iraqis from that country’s war-caused diaspora and now taking on Syrians.

How are cruise missiles and bombs and whatever else we choose to send to Syria short of ground forces, going to ameliorate this mess?

The man or woman who believes that he or she can be surgical with military force is an utter fool. No plan survives first contact with the enemy. No use of military force is surgical. It is blunt, unforgiving, tending to produce results and effects never dreamt of by the user. In for a penny, in for a trillion.

Go ahead, President Obama. Strike that Syrian tarbaby. If your hands, feet, and head are not eventually stuck in its brutal embrace – if you stop, reconsider, back out and are allowed to get away with it – what have you accomplished?  Preserving your credibility?

U.S. credibility in this part of the world is shot to hell already – largely by the catastrophic invasion of Iraq (not Obama’s fault, to be sure; but just as surely, America’s fault – foreigners do not differentiate presidents.) Credibility has been further shredded by continued drone strikes, by a failure to take any actions against the flow of arms from Saudi Arabia into Syria; by tacit support of the Saudi reinforcement of the dictatorship in Bahrain; and most powerfully by the failure to remain balanced – and therefore of some use – in the issue of Israel and Palestine.

When I survey that long, sunken black granite wall near the Lincoln Memorial and consider the over 58,000 names etched on it, and the two and a half million Vietnamese who, if they had such a wall, would be similarly inscribed, I get angry.

I know that President Johnson’s team, notably his national security advisor, McGeorge Bundy, assured the President that U.S. prestige was at stake in Vietnam. LBJ’s team knew they could not win the war, but they thought they could preserve U.S. prestige.

I just wish they had had to tell that to the families of every name on that wall – and every Vietnamese who would be on that country’s wall if it had one: you all died for prestige.

*Lawrence Wilkerson served 31 years in the U.S. Army infantry. His last position in government was as secretary of state Colin Powell’s chief of staff. He currently teaches government and public policy at the College of William and Mary.