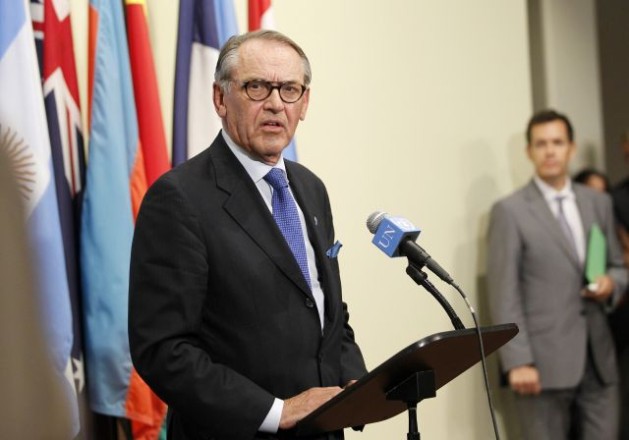 Deputy Secretary-General Jan Eliasson speaks to journalists on Aug. 21 following his closed-door briefing to the Security Council on the latest allegations of chemical weapons use in Syria. Credit: UN Photo/Rick Bajornas

UNITED NATIONS, Aug 22 2013 (IPS) - The United States, Britain and France, three veto-wielding permanent members of the Security Council, are making a strong push for an “urgent” U.N. investigation of the alleged use of chemical weapons Wednesday in Syria.

The UK Deputy Permanent Representative Ambassador Phillip Parham told reporters Thursday that a letter, signed by over 35 member states, was being delivered to Secretary-General Ban Ki-moon for a “swift investigation”.

But he refused to identify the countries, nor was letter made public.

The letter, a copy of which was obtained by IPS, did not contain the list of signatories. The only three permanent members taking the lead, and whose signatures appear on the letter, were the United States, Britain and France.

Both Russia and China, the other two permanent members, were not signatories.

The letter, dated Aug. 21, says: “We would like to bring to your attention credible reports of the use of chemical weapons on 21 August 2013 in Rif Damascus. Given the gravity of these reports, we judge it essential that all the pertinent facts are swiftly investigated.”

The letter requests the secretary-general to launch an urgent investigation into these allegations “as expeditiously as possible” under the auspices of the secretary general’s ‘Mechanism for the Investigation of Alleged Use of Chemical and Biological Weapons.’

This “mechanism” was derived from the mandate established by the U.N. General Assembly in its resolution A/RES/42/37C of Nov. 30, 1987.

The letter requests Ban to “report back to Member States as soon as possible”.

Russia, which has stood by Syrian President Bashar al-Assad, claims the alleged chemical arms attack Wednesday was a “pre-planned provocation” orchestrated by the rebels.

A Russian Foreign Ministry spokesman was quoted as saying, “All of this looks like an attempt at all costs to create a pretext for demanding that the U.N. Security Council side with opponents of the regime and undermine the chances of convening the Geneva conference.”

The proposed conference was aimed at peace negotiations between the Syrian government and rebels, but it has failed to get off the ground.

Currently, there is a U.N. team in Damascus trying to investigate earlier attacks with chemical weapons, but the team’s mandate is limited to whether or not chemical weapons were used in these attacks last year. And the team does not have a mandate to pin the blame either on the Syrian government or the rebels.

“We are aware that the UN Mission is now in Damascus,” the letter notes. “We urge you to do all you can to ensure that the Mission has urgent access to all relevant sites and sources of information.”

To assist the investigation, the letter lists a selection of open source information, along with web links.

Meanwhile, in a statement released Thursday, the secretary-general said he was shocked to hear the reports of the alleged use of chemical weapons in the suburbs of Damascus.

According to the agreement reached in Damascus in July, the two parties are discussing, in parallel, other allegations and their related sites.

The United Nations mission to investigate allegations of chemical weapons use in Syria is following the current situation in Syria carefully, and remains fully engaged in the investigation process that is mandated by the secretary-general, said a statement from his spokesman.

“Professor Sellstrom is in discussions with the Syrian government on all issues pertaining to the alleged use of chemical weapons, including this most recent reported incident. The Secretary-General reiterates that any use of chemical weapons by any side under any circumstances would violate international humanitarian law,” the statement added.

Meanwhile, the 15-members of the Security Council issued a statement Thursday calling for a U.N. investigation of the chemical weapons attack. But it stopped short of adopting a resolution, which would have been vetoed by Russia and possibly China.

“When faced with serious allegations of chemical weapons use in Syria, rather than seeking the truth and demanding cooperation with U.N. investigators, Russia and China chose once again to protect a government that has been slaughtering its own population,” he said.

“They will go down in history as two major enablers of Assad’s bloody tactics to repress the Syrian people.”