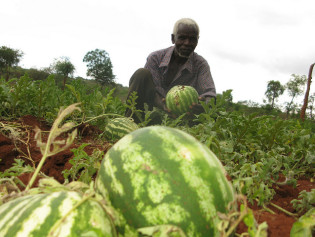 By Lester R. Brown
Global demand for soybeans has soared in recent decades, with China leading the race. Nearly 60 percent of all soybeans entering international trade today go to China, making it far and away the world's largest importer.

By Lester R. Brown
Between 2007 and 2011, carbon emissions from coal use in the United States dropped 10 percent. During the same period, emissions from oil use dropped 11 percent.

By Lester R. Brown
People do not normally leave their homes, their families, and their communities unless they have no other option. Yet as environmental stresses mount, we can expect to see a growing number of environmental refugees. Rising seas and increasingly devastating storms grab headlines, but expanding deserts, falling water tables, and toxic waste and radiation are also forcing people from their homes.

By Lester R. Brown
Many countries are facing dangerous water shortages. As world demand for food has soared, millions of farmers have drilled too many irrigation wells in efforts to expand their harvests. As a result, water tables are falling and wells are going dry in some 20 countries containing half the world's people.

By Lester R. Brown
Heat waves clearly can destroy crop harvests. The world saw high heat decimate Russian wheat in 2010. Crop ecologists have found that each one-degree Celsius rise in temperature above the optimum can reduce grain harvests by 10 percent. But the indirect effects of higher temperatures on our food supply are no less serious.

OP-ED: The Good News About Coal

By Lester R. Brown
During the years when governments and the media were focused on preparations for the 2009 Copenhagen climate negotiations, a powerful climate movement was emerging in the United States: the movement opposing the construction of new coal-fired power plants.

By Lester R. Brown
After the earth was created, soil formed slowly over geological time from the weathering of rocks. It began to support early plant life, which protected and enriched it until it became the topsoil that sustains the diversity of plants and animals we know today. Now the world's ever-growing herds of cattle, sheep, and goats are converting vast stretches of grassland to desert.

Turning Toward the Sun for Energy

By Lester R. Brown
One key component of the Plan B climate stabilisation strategy is solar energy. Solar is even more ubiquitous than wind energy and can be harnessed with both solar photovoltaics (PV) and solar thermal collectors.

Smart Planning for the Global Family

By Lester R. Brown
When it comes to population growth, the United Nations has three primary projections. The medium projection, the one most commonly used, has world population reaching 9.2 billion by 2050. The high one reaches 10.5 billion. The low projection, which assumes that the world will quickly move below replacement-level fertility, has population peaking at eight billion in 2042 and then declining.

By Lester R. Brown
Uprisings in Tunisia, Egypt, and across the Middle East at the start of 2011 have reminded the world just how politically fragile some countries are. But the focus of international politics has been shifting for some time now.

Geothermal: Getting Energy from the Earth

By Lester R. Brown
The heat in the upper six miles of the earth's crust contains 50,000 times as much energy as found in all the world's oil and gas reserves combined. Despite this abundance, only 10,700 megawatts of geothermal electricity generating capacity have been harnessed worldwide.

The Return of the Bicycle

By Lester R. Brown
The bicycle has many attractions as a form of personal transportation. It alleviates congestion, lowers air pollution, reduces obesity, increases physical fitness, does not emit climate-disrupting carbon dioxide, and is priced within the reach of the billions of people who cannot afford a car.

By Lester R. Brown
With water shortages constraining food production growth, the world needs an effort to raise water productivity similar to the one that nearly tripled land productivity over the last half-century.

By Lester R. Brown
Cars promise mobility, and in a largely rural setting they provide it. But in an urbanising world, where more than half of us live in cities, there is an inherent conflict between the automobile and the city.

ENERGY: Coal-Fired Power on the Way Out?

By Lester R. Brown
The past two years have witnessed the emergence of a powerful movement opposing the construction of new coal-fired power plants in the United States.

By Lester R. Brown
Our early twenty-first century civilisation is being squeezed between advancing deserts and rising seas.

By Lester R. Brown
In early 2008, Saudi Arabia announced that, after being self-sufficient in wheat for over 20 years, the non-replenishable aquifer it had been pumping for irrigation was largely depleted.

By Lester R. Brown
Protecting the earth's nearly 4 billion hectares of remaining forests and replanting those already lost are both essential for restoring the earth's health, an important foundation for the new economy.

By Lester R. Brown
Some 43 countries around the world now have populations that are either essentially stable or declining slowly.
ADVERTISEMENT ADVERTISEMENT