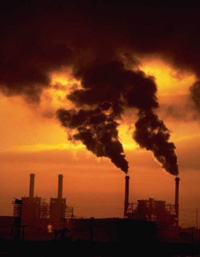 Measured by the biologically productive land area that can support human habitation, the earth is shrinking. Mounting population densities, once generated solely by population growth, are now also fueled by the relentless advance of deserts and may soon be affected by the projected rise in sea level. As overpumping depletes aquifers, millions more are forced to relocate in search of water.

Desert expansion in sub-Saharan Africa, principally in the Sahelian countries, is displacing millions of people – forcing them to either move southward or migrate to North Africa. A 2006 U.N. conference on desertification in Tunisia projected that by 2020 up to 60 million people could migrate from sub- Saharan Africa to North Africa and Europe. This flow of migrants has been under way for many years.

In mid-October 2003, Italian authorities discovered a boat bound for Italy carrying refugees from Africa. After being adrift for more than two weeks and having run out of fuel, food, and water, many of the passengers had died. At first the dead were tossed overboard. But after a point, the remaining survivors lacked the strength to hoist the bodies over the side. The dead and the living shared the boat, resembling what a rescuer described as “a scene from Dante’s Inferno”.

The refugees were believed to be Somalis who had embarked from Libya, but the survivors would not reveal their country of origin, lest they be sent home. We do not know whether they were political, economic, or environmental refugees. Failed states like Somalia produce all three. We do know that Somalia is an ecological disaster, with overpopulation, overgrazing, and the resulting desertification destroying its pastoral economy.

Perhaps the largest flow of Somali migrants is into Yemen, another failing state. In 2008, an estimated 50,000 migrants and asylum seekers reached Yemen, 70 percent more than in 2007. And during the first three months of 2009 the migrant flow was up 30 percent over the same period in 2008. These numbers simply add to the already unsustainable pressures on Yemen’s land and water resources, hastening its decline.

On Apr. 30, 2006, a man fishing off the coast of Barbados discovered a 20- foot boat adrift with the bodies of 11 young men on board, bodies that were “virtually mummified” by the sun and salty ocean spray.

As the end drew near, one passenger left a note tucked between two bodies: “I would like to send my family in Basada [Senegal] a sum of money. Please excuse me and goodbye.” The author of the note was apparently one of a group of 52 who had left Senegal on Christmas Eve aboard a boat destined for the Canary Islands, a jumping off point for Europe.

They must have drifted for some 2,000 miles, ending their trip in the Caribbean. This boat was not unique. During the first weekend of September 2006, police intercepted boats from Mauritania with a record total of nearly 1,200 people on board.

For those living in Central American countries, including Honduras, Guatemala, Nicaragua, and El Salvador, Mexico is often the gateway to the United States. In 2008, Mexican immigration authorities reported some 39,000 detentions and 89,000 deportations. In the city of Tapachula on the Guatemala-Mexico border, young men in search of jobs wait along the tracks for a slow-moving freight train passing through the city en route to the north. Some make it onto the train. Others do not.

The Jesús el Buen Pastor refuge is home to 25 amputees who lost their grip and fell under a train while trying to board. For these young men, says Olga Sánchez Martínez, the director of the refuge, this is the “end of their American dream”. A local priest, Flor María Rigoni, calls the migrants attempting to board the trains “the kamikazes of poverty”.

Today, bodies washing ashore in Italy, Spain, and Turkey are a daily occurrence, the result of desperate acts by desperate people.

And each day Mexicans risk their lives in the Arizona desert trying to reach jobs in the United States. On average, some 100,000 or more Mexicans leave rural areas every year, abandoning plots of land too small or too eroded to make a living.

They either head for Mexican cities or try to cross illegally into the United States. Many of those who try to cross the Arizona desert perish in its punishing heat. Since 2001, some 200 bodies have been found along the Arizona border each year.

With the vast majority of the 2.4 billion people to be added to the world by 2050 coming in countries where water tables are already falling, water refugees are likely to become commonplace. They will be most common in arid and semiarid regions where populations are outgrowing the water supply and sinking into hydrological poverty.

Villages in northwestern India are being abandoned as aquifers are depleted and people can no longer find water. Millions of villagers in northern and western China and in parts of Mexico may have to move because of a lack of water.

Africa, too, is facing this problem. The Sahara Desert is pushing the populations of Morocco, Tunisia, and Algeria northward toward the Mediterranean. In a desperate effort to deal with drought and desertification, Morocco is geographically restructuring its agriculture, replacing grain with less thirsty orchards and vineyards.

In Iran, villages abandoned because of spreading deserts or a lack of water already number in the thousands. In the vicinity of Damavand, a small town within an hour’s drive of Tehran, 88 villages have been abandoned. And as the desert takes over in Nigeria, farmers and herders are forced to move, squeezed into a shrinking area of productive land. Desertification refugees typically end up in cities, many in squatter settlements. Others migrate abroad.

In Latin America, deserts are expanding and forcing people to move in both Brazil and Mexico. In Brazil, some 66 million hectares of land are affected, much of it concentrated in the country’s northeast. In Mexico, with a much larger share of arid and semiarid land, the degradation of cropland now extends over 59 million hectares.

While desert expansion and water shortages are now displacing millions of people, rising seas promise to displace far greater numbers in the future, given the concentration of the world’s population in low-lying coastal cities and rice-growing river deltas. The numbers could eventually reach the hundreds of millions, offering yet another powerful reason for stabilising both climate and population.

In the end, the issue with rising seas is whether governments are strong enough to withstand the political and economic stress of relocating large numbers of people while suffering heavy coastal losses of housing and industrial facilities.

During this century we must deal with the effects of trends – rapid population growth, advancing deserts, and rising seas – that we set in motion during the last century. Our choice is a simple one: reverse these trends or risk being overwhelmed by them.

*Lester R. Brown is the founder of the Earth Policy Institute. This article is adapted from Chapter 2, “Population Pressure: Land and Water,” of Brown’s “Plan B 4.0: Mobilizing to Save Civilization” (New York: W.W. Norton & Company, 2009), available on-line at www.earthpolicy.org/index.php? /books/pb4.