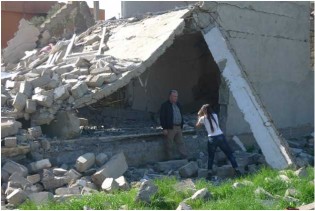 By Mark Lattimer
East of Mosul, many of the lands liberated from ISIS stand empty. Driving through the Nineveh plains, traditional homelands of Iraq’s minority communities of Yezidis, Christians, Shabak and Turkmen, you pass one ghost town after another, peopled only by members of the armed militias known in Iraq as the Hashd al-Shaabi, or ‘popular mobilization’.

By Mark Lattimer and Mahmoud Swed
Through all of Iraqi President Saddam Hussein’s campaigns of ‘Arabization’, they survived. The diverse Iraqi communities inhabiting the Nineveh plains – Yezidis, Turkmen, Assyrians and Shabak, as well as Kurds – held on to their unique identities and most of their historic lands.
ADVERTISEMENT ADVERTISEMENT