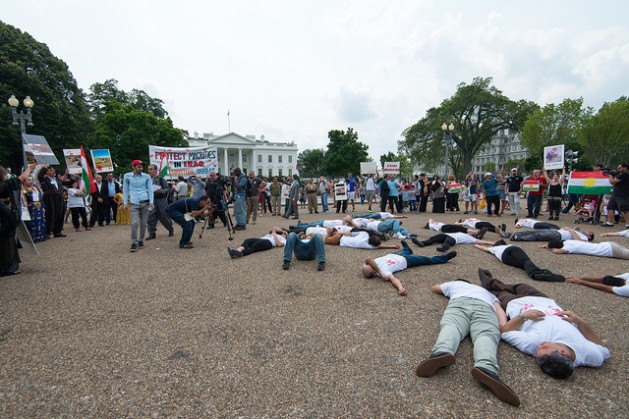 Demonstrators in front of the White House call for greater U.S. intervention against ISIS to save Iraqi minorities, including Yazidi and Christians, from genocide. Credit: Robert Lyle Bolton/cc by 2.0

LONDON, Oct 18 2014 (IPS) - Through all of Iraqi President Saddam Hussein’s campaigns of ‘Arabization’, they survived. The diverse Iraqi communities inhabiting the Nineveh plains – Yezidis, Turkmen, Assyrians and Shabak, as well as Kurds – held on to their unique identities and most of their historic lands.

So too they survived the decade of threats, bombings and killings that followed the 2003 invasion of Iraq, remaining on lands that in some cases they have settled for over 4,000 years.

But in less than three months this summer, much of the Nineveh plain was emptied of its minority communities.

The advance by the Islamic State of Iraq and Syria (ISIS) was marked by a series of atrocities, some of them recorded and posted on the internet by ISIS itself, which have outraged the international community.

Now the first comprehensive report on the situation of Iraq’s minorities, released Thursday by Minority Rights Group (MRG) International and the Ceasefire Centre for Civilian Rights, documents the full extent of violations committed against all of Iraq’s minority communities and reveals ISIS as an organisation motivated by the logic of extermination.

Minorities have been principal targets in a systematic campaign of torture, killings, sexual violence, and enslavement carried out by ISIS.

It should be stressed that nearly all of Iraq’s communities have suffered at the hands of ISIS, including Shi’a and Sunni Arabs, but the varying religious and social status attributed by ISIS ideologues to different peoples – as well as the value of the lands they inhabit – have made some communities much more vulnerable, with the nature of abuse often being determined by the particular ethno-religious background of the victims.

Under the pretence of a religious edict, for example, ISIS confiscated Christian-owned property in Mosul and enforced an ultimatum on the community to pay jizya tax.

Yezidis have repeatedly been denied even a right of existence by ISIS, and some other extremist groups, on the erroneous grounds that they are ‘devil-worshippers’.

The report delineates a pattern of targeting of Yezidis and their property, now overshadowed by the latest wave of violence that has cost the lives of at least hundreds and the kidnapping of up to 2500 men, women and children since August.

Captured Yezidi men have been forced to choose between conversion or death, whilst Yezidi women and children have been sold to slavery and subjected to sexual abuse.

But it would be a mistake to imagine that the violations suffered by Iraqi minorities date from a few months ago – or to believe that ISIS was the only perpetrator.

Since 2003, Christians have been the target of bombings, assassinations and kidnappings, with groups often targeting property and places of worship. Most of Iraq’s Christian population, up to one million people, had already fled the country by the start of the year.

Yezidis suffered the single deadliest attack of the conflict, when a multiple truck bombing in Sinjar in 2007 killed as many as 796 people, according to the Iraqi Red Crescent.

And one of the most sobering pictures to emerge from the report is the series of mass killings of Turkmen and Shabak carried out in recent years, the violence intensifying in the latter half of 2013.

Throughout these years of violence the Iraqi government has proved either unable or unwilling to protect its minority communities. Few incidents are properly investigated and the perpetrators nearly always go unpunished, in some cases with indications of official complicity.

Aside from the immediate threats of violence, communities including Yezidis, Roma and Black Iraqis continue to face chronic and institutionalised discrimination that hinders their cultural and religious rights as well as imposing restrictions on access to health care, education and employment.

The choice now confronting many of Iraq’s diverse communities is be forced to flee en masse or to endure a life of continuous fear and suffering. Some peoples, such as the Sabean-Mandaeans, have already seen their numbers reduced by emigration to the point where their very survival in Iraq as a distinct community is under threat.

Some community leaders interviewed expressed the hope and determination that they could return to their lands; others saw emigration as their only possibility.

A comprehensive plan for the restitution to minority communities of their former lands and properties in the Nineveh plains and elsewhere is thus an essential component of any positive vision for Iraq’s future.

The need to ensure that those responsible for attacks are held to account also requires Iraq to accede to the Rome Statute of the International Criminal Court (ICC).

More immediately, there is nothing to stop the ICC prosecutor from opening a preliminary investigation into alleged crimes committed by the growing number of nationals of existing ICC state parties fighting in Iraq.

But Iraq’s own response to the ISIS threat holds serious dangers, including in particular the wholesale re-mobilisation of the Shi’a militias.

From a new sectarian war every community stands to lose.