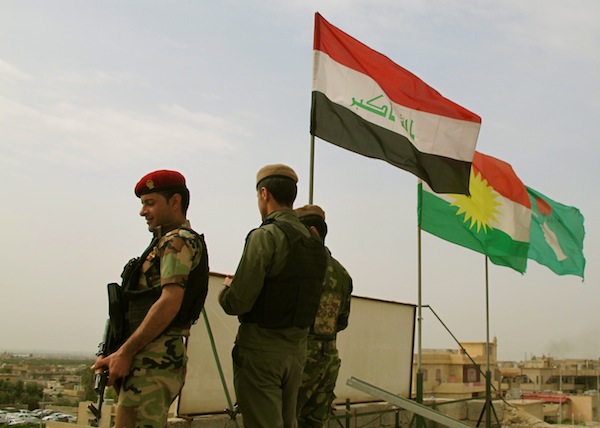 BASHIQA, Iraq, May 20 2013 (IPS) - Luis Shabi nostalgically recalls his nine years of novitiate in Rome and a “fantastic road trip through Europe” before returning to Iraq in 1969. “Those were the good times,” sighs the Chaldean Archbishop of Baghdad from a bunker in the heart of the Iraqi capital.

His office, in the basement of the church of Saint Mary of the Rosary, east of the city, is a humble temple. Yet it is protected today by high concrete walls, barbed wire and soldiers on guard next to an armoured vehicle at the entrance.s

“We have always been a peaceful and hardworking people, with a reputation for contributing to Iraqi culture with many writers, poets, philosophers,” the priest, wearing an immaculate black cassock and a pink bonnet, says of Iraqi Christians.

“But since the invasion in 2003, the extremists have reinforced the idea of us being ‘newcomers’, something like an ‘extension of the West’ in the Middle East,” laments Shabi, stressing that the fact that there were some Christian ministers during the years of Saddam Hussein “makes things even worse”.

“What has Europe done to help us? What about Rome? Neither civil authorities nor the religious ones in Europe have moved a single finger to assist us in one of the worst moments of our history.”

With Iraqi Mandaeans quite literally decimated – nine out of 10 have either died or fled since 2003 – the local Christian community has suffered significantly over the last decade. The United Nations High Commission for Refugees reports that about half of that population has left the country since 2003.

The Assyrian Council of Europe, an independent non-governmental organisation, goes further, pointing to the Iraqi Constitution as one of the culprits of marginalisation faced by minorities in Iraq.

“Islam is the state religion and a basic foundation for the country’s law,” states Article 2.1 of Iraq’s 2005 Carta Magna.

“We are not Arabs but Semitic,” Shabi proclaims. “We’ve been speaking Aramaic in Mesopotamia since the times of Hammurabi. We are the grandsons of Abraham and of Nebuchadnezzar, but our future in Iraq does not go any further than tomorrow.”

"Our future in Iraq does not go any further than tomorrow.”
-- Luis Shabi

From his underground bunker, it’s just a ten-minute walk to the modern and majestic white facade of the Church of Our Lady of Perpetual Help. The church was renovated last year, but here no one has forgotten what happened here less than two years ago.

“They were five. They jumped over the concrete walls and entered the church yelling ‘God is great’,” remembers Aysur Said, the current pastor of the church. “They said they belonged to the Islamic State of Iraq – a Sunni group linked to al-Qaeda. It was Oct. 31, 2011. We were attending mass.”

Said’s predecessor, Father Waseem, was one of 50 killed in the most severe attack against this community since 2003. “Some died by gunfire and others by suffocation. A number of them were locked in a room that we use to dress up. There are no windows and the air ran out right away,” Said told IPS.

A place in Eden

Immediately after the brutal attack, the Christians of Iraq demanded their own autonomous region in the plains of Nineveh region, in the northwest of the country, bordering the Kurdish Autonomous Region of Iraq.

In those plains, where the Bible places the Garden of Eden, is a compact Christian population. Today the area is disputed by Kurds and Arabs. Its administrative capital is the former Baathist stronghold of Mosul, a place shaken by sectarian clashes since mass protests began taking place last December.

Bashiqa, 30 kilometres from Mosul, is one of the places that many Christians claim as part of their would-be autonomous region. From the Orthodox church of Mart Shmouni, 23-year-old Father Daniel underscores “the importance of unity among Iraqis”, though he admits that unity is not easy.

“This is chaos. The new authorities in Baghdad are unable to protect us, so our people continue to flee in the thousands,” Father Daniel told IPS. “However, in recent months we have also welcomed many Christian families arriving from Syria and knocking the doors of our monasteries and churches. Many of them [come] with virtually nothing.”

Despite its proximity to volatile Mosul, Bashiqa enjoys relative stability, something that Father Daniel attributes to the deployment of Kurdish soldiers in the area. “For many, Bashiqa is just a stop along their way to the Kurdish Autonomous Region, where security is complete,” explains the pastor.

Kirkuk, 230 kilometres northwest of Baghdad, also languishes in a legal limbo between Baghdad and the Kurdish Regional Government.

Imad Yokhana Yago, a member of parliament in Baghdad for the Assyrian Democratic Movement, denounces “genocide at the hands of Islamists” and the “continuous mass flight” of his people since 2003. At the same time, he advocates for a project tailored to his dwindling community.

“We fear there will be a new war in the country due to the tensions between Kurds and Sunni and Shiite Arabs,” Yago tells IPS from Kirkuk, calling for Christian autonomy in Nineveh region that would “protect our community and also work as a ‘buffer zone’ between the warring sides”.

The project, however, is a controversial one, as many fear that such region could turn into a ghetto into which Christians from all the country would be displaced.

“The repression we are suffering does not come exclusively from the Iraqi Arabs,” asid Yousif Eisho, executive of the Assyrian Christian Movement. “Iran, Saudi Arabia… there are too many foreign agents involved in the ethnic cleansing of our people.”

“The said ghetto will eventually turn real if the constant interference from the outside remains,” Eisho warned.