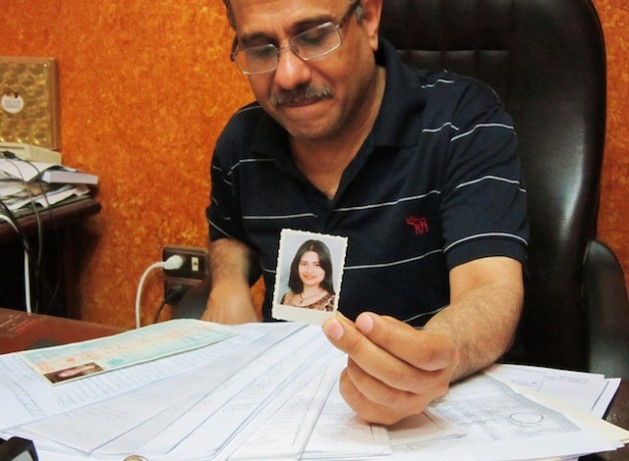 CAIRO, Apr 16 2013 (IPS) - When a young Christian girl goes missing in the Egyptian port city of Alexandria, her family will call on a certain Muslim sheikh in the nearby town of El-Ameriya.

The local Salafi leader, whose ultra-conservative views condone the marriage of girls as young as nine, has a history of abducting Coptic Christian girls and forcing them to convert to Islam and marry Muslim men, claim rights activists.

And so the sheikh and his associates are the natural starting point for any investigation into missing underage Christian girls. And, according to activists, that is usually where they find them.

“Whenever a young girl disappears in the area the trail leads to this sheikh,” says Mamdouh Nakhla, chairman of the Al Kalema Organisation for Human Rights.

In a recent case, a 13-year-old Coptic Christian girl from a village near Alexandria was allegedly kidnapped and held for over a week as her abductors tried to force her to renounce her religion.

According to her testimony, she was drugged unconscious while in a taxi on her way home from school. She woke up in a secluded house with two Salafi sheikhs and an elderly woman. Her abductors forced her to wear niqab, a full veil covering the body and face, and beat her when she refused to convert to Islam.

Girgis claims she was released nine days later when the sheikhs became nervous after her family organised large demonstrations for her return. The Salafis turned her over to police, who feared the girl’s testimony would spark sectarian clashes, and so tried to convince her to claim she had wilfully gone to a sheikh seeking to convert to Islam.

“The only thing unusual (about this case) was that the girl was returned,” says Nakhla. “In one case I investigated a kidnapped girl was allowed to call her parents, but in all others the girl was never heard from again.”

Christian rights watchdogs say abductions and forced conversions of young Egyptian Coptic girls have been going on for decades right under the noses of local authorities. But the frequency of the kidnappings has increased alarmingly since the uprising in 2011 that toppled dictator Hosni Mubarak and brought an Islamist-led government to power.

More than 500 Christian girls have been abducted in the last two years, according to the Association of Victims of Abduction and Forced Disappearance (AVAFD), which documents the disappearances. A growing number of cases involve girls between the ages of 13 and 17.

AVAFD head Abram Louis claims the abducted girls are taken to ‘safe’ houses, where they are manipulated or blackmailed into converting to Islam and forced to marry Muslim men, often to serve as second wives.

“If we inform the police where the kidnapped girl is being kept, they inform the Salafis, who then move her away to another home and then we lose all trace of her,” Louis said in a recent interview.

“Egypt has laws in place to protect girls under 18, but Salafis do not accept them,” says Amal Abdel Hadi, head of the New Woman Foundation. “To them, a girl is only a minor until she has her first period.”

However, Salafi leaders have categorically denied any role in abducting Christian girls or forceful proselytising. They claim that so far as they know, the girls converted to Islam of their own free will, in some cases after falling in love with a Muslim man.

Ishaak Ibrahim, a religious rights researcher at the Egyptian Initiative for Personal Rights (EIPR), says inter-faith love affairs and conversions are dangerously provocative issues in Egypt. Rumours of such have led to outbreaks of sectarian violence.

He says many of the alleged abductions involve young Christian girls who appear to have converted to Islam to escape bad relations with their families, or after having engaged in pre-marital relations (taboo in conservative Egyptian culture) with Muslim men.

“The girls appear to have chosen to change their religion,” Ibrahim told IPS. “But because the family is ashamed, and because the police don’t investigate to find their daughter, the family chooses the easiest solution, which is to say the girl was kidnapped by Muslim extremists.”

Such cases only present a problem when the girl is a minor, he says, as Egypt’s Child Law criminalises the marriage of any girl under 18, even if by her own free will.

But Nakhla, who is representing the families of 20 missing Coptic girls, says there are clear signs that young girls have been coerced into converting and marrying.

Referring to one recent case, he asks if it makes sense that a 15-year-old Christian girl would suddenly choose to convert to Islam and serve as a second wife, without any legal rights, to a firebrand Salafi sheikh over 40 years her senior. The girl has never spoken or written to her parents since her disappearance – unusual behaviour in a country where family ties run deep.

“In Egypt it is a crime to marry a minor, and you can’t legally change your religion until you’re 18… yet the government refuses to investigate these cases and arrest those responsible,” complains Nakhla.

While Ibrahim argues that all Egyptians should have the right to change their religion at any time, he says authorities also have a responsibility to ensure that women – particularly minors – are protected from coercion and exploitation.

“The family should be allowed to meet their daughter and get her to explain what she wants in the presence of the public prosecutor,” he says.

Salafi leaders have rejected any state intervention, and have warned against attempts by parents and human rights organisations to return the girls to their families.