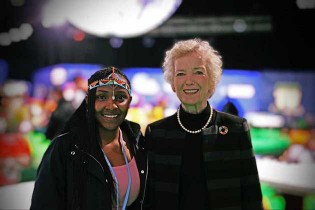 By Mary Robinson
“Planet 50-50 by 2030: Step It Up for Gender Equality” – the theme of this year’s International Women’s Day serves as a timely reminder that, despite incremental progress of recent years and the ambition of the new global development agenda, we must redouble efforts to achieve a world underpinned by gender equality. All women must be empowered to realise their full and equal rights. But what does it actually mean to step it up for gender equality?

By Mary Robinson
Mary Robinson spoke to Nastasya Tay of TerraViva/IPS about human rights today and the new campaign Every Human Has Rights, on the sidelines of the eighth CIVICUS World Assembly (Jun. 18-21).

MILLENNIUM GOALS NOT ON COURSE – TIME FOR URGENT ACTION

By Mary Robinson
Where do we stand on the UN Millennium Development Goals halfway to the 2015 deadline? asks Mary Robinson, former President of Ireland and United Nations High Commissioner for Human Rights, and founder and president of Realising Rights: The Ethical Globalisation Initiative. In this article, Robinson writes that a new UN report shows that significant strides have been made in some countries while in other places, like sub-Saharan Africa, no country is on track to meet the goals of halving extreme poverty, ensuring universal primary education, or stemming the AIDS pandemic by 2015. This is tragic and unacceptable because we know what works and what kinds of actions are needed to make faster and more equitable progress. The experience of the past seven years tells us that where political will exists there can be positive results. Even some of the poorest countries, like Rwanda, Mozambique, and Bangladesh, are on track to achieve many of the MDGs, precisely because there is political will and responsible donor support. Developed countries have an obligation to provide timetables for delivering on their promises concerning aid volume, aid effectiveness, and debt cancellation.

WHAT HOPE FOR GLOBAL ACTION ON MIGRATION?

By Mary Robinson
Governments are beginning to acknowledge the urgent need for international policies that address the root causes of migration, like poverty and the demand for migrant labour, writes Mary Robinson, former President of Ireland, UN High Commissioner for Human Rights and currently President of Realising Rights: The Ethical Globalisation Initiative. In this analysis, Robinson writes that protecting migrants\' rights is central to any effective migration management. One important way to ensure that human rights issues are firmly on the agenda is to involve civil society and migrants themselves. Robinson observes that migrants with opportunities for decent and legal work contribute more to development than those who are exploited, and that policies which promote human rights like legalisation of status and access to health and housing build the capacity of diaspora communities and help their integration, even while maintaining close ties to their countries of origin.

HEALTH IS A HUMAN RIGHT

By Mary Robinson
The 10th of December is the International Human Rights Day. Anniversaries should be about celebration. But this Human Rights Day is, tragically, yet another reminder of how far we are from living up to the commitments made by the world\'s governments to ensure a life of dignity for all people, writes Mary Robinson, former President of Ireland (1990-1997) and UN High Commissioner for Human Rights (1997-2002) and current chair of Realising Rights: the Ethical Globalisation Initiative. In this analysis, Robinson writes that despite the increased attention paid this year to combating extreme poverty around the world, the fundamental right to health remains unfulfilled for millions of people today -- not only those suffering from diseases like HIV/AIDS but also those without access to clean water, adequate food, or a reliable health system. Health is not a side issue: it is key to the most basic of the rights the world now agrees should be guaranteed. Health underpins the right to life, the right to security, and the right to a sustainable livelihood.

By Mary Robinson
Will 2005 be a year of breakthrough which moves us closer to realizing the World Social Forum\'s conviction that another world is possible? Or will it be yet another year in which the divides in our world continue to grow? The answer, of course, depends on the choices we make and the values we uphold, writes Mary Robinson, Executive Director of The Ethical Globalisation Initiative and Honorary President of Oxfam International. In this article, the author writes that commitments that should be front and center during 2005 are those that governments made at the start of the 21st century. Five years after the largest gathering ever of heads of state and government solemnly vowed in the 2000 UN Millennium Declaration to spare no effort to free our fellow men, women and children from the abject and dehumanizing conditions of extreme poverty, it is clear that many countries in the world are falling desperately short of the progress needed to reach the Millennium Development Goals (MDGs) by 2015. In our search for a more ethical globalization, the time has come to return to the values and principles reflected in the Universal Declaration of Human Rights. The universality of human rights, their focus on human dignity, and their concern for accountability, make them uniquely appropriate for re-shaping development cooperation, fostering good governance, and combating discrimination, disease, and despair.

By Mary Robinson
World Food Day is a painful reminder of the divide between those who are well nourished and those who live in hunger, writes Mary Robinson, Executive Director of Realising Rights: The Ethical Globalisation Initiative, and former President of Ireland and UN High Commissioner for Human Rights. In this article, Robinson writes that every seven seconds a child under 10 dies directly or indirectly of hunger; more than 2 billion people worldwide suffer from hidden hunger or micronutrient malnutrition. The crisis is compounded by other global challenges which must be fought vigorously, particularly the fight against HIV/AIDS. Infection rates are rising among African women. Almost 60% of those living with AIDS in Africa are women, who make up 80% of Africa\'s small farmers and have traditionally been able to help their families and communities most in times of food crisis, but the toll taken by AIDS makes this task increasingly difficult. At the heart of any new strategy must be a greater commitment to implementing the human right to adequate food.

By Mary Robinson
Since September 11, 2001 shook the world, the commitments which ushered in the new millennium have been overshadowed by the threats of terrorism, fears about the future, and questions about the viability of open societies joined by international norms and values, writes Mary Robinson, executive director of The Ethical Globalisation Initiative, former president of Ireland, and former UN High Commissioner for Human Rights. If we want real human security, instead of putting up walls of fear and resorting only to power politics, we should seek ways to focus on promoting in practice the values of freedom, equality, solidarity, tolerance, respect, and shared responsibility which can unite rather than divide. We should also remember that 9/11 did not, in fact, change much in the lives of most people on the planet for whom human insecurity was and is a daily reality. The world\'s economic system has operated largely in isolation from human rights, both at an institutional level and in intellectual terms. The first step to addressing the apparent conflicts between the values of the market and the values of human rights is to recognise that the objectives of international human rights and international trade in fact have much in common. This column was adapted from a lecture given by the author at the Aspen Institute and approved by her in this form.

WHY THE MILLENNIUM GOALS ARE WORTH FIGHTING FOR

By Mary Robinson
My message to both the World Economic Form and the World Social Forum is the same: we won\'t achieve human security for all without taking global commitments to human rights and human development more seriously, writes Mary Robinson, executive director of The Ethical Globalisation Initiative, former president of Ireland and former UN High Commissioner for Human Rights. In this article, Robinson writes that we must first be more rigorous in holding governments accountable for the obligations they have made, most recently in the UN Millennium Declaration, adopted in September 2000. The Monterrey Conference on Financing for Development estimated that an additional USD 50 billion a year in global development spending would be needed to achieve the MDGs. Given the current budgets for military spending in nations around the world, that figure shouldn\'t daunt the international community. The MDGs should not be perceived as ends in themselves but as benchmarks of progress. They can be powerful tools for change because they are recognised by the UN and by the international financial institutions --the World Bank and IMF. Now we need to embed them solidly in the broader framework of human rights.

By Mary Robinson
Modern governments acknowledge that they have a responsibility to work actively to end international poverty, protect humanity from dangerous diseases, provide children with education, preserve the environment for our descendants, and ensure that everyone has access to reasonable housing and clean water, writes Mary Robinson, Executive Director of The Ethical Globalisation Initiative and former President of Ireland and former UN High Commissioner for Human Rights. Most recently, all 189 United Nations member states signed the UN Millennium Declaration in 2000, which formally commits them to take practical and co-operative action in these and other areas. Robinson writes that there has never been a greater need for simple and convincing arguments that explain, to governments and people alike, why action to end poverty, illiteracy, oppression and disease is right, is in the interests of everyone - richer and poorer - and requires combined and persistent effort from all parties. Political leaders, in their public capacity, and citizens in their private capacity, act to help others because they believe it is right to do so. Ethical commitment is an essential component of any strategy to make the world a safer and better place for all who live in it. Action to end poverty, illiteracy and oppression will not succeed in the absence of such values.
ADVERTISEMENT ADVERTISEMENT