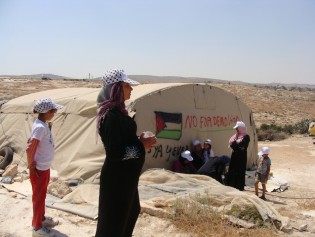 By Mya Guarnieri
A year after their bid for statehood flopped in the United Nations’ Security Council, the Palestine Liberation Organisation is again planning to seek an upgrade in UN status. On Sep. 27, the PLO will approach the UN General Assembly in hopes of becoming a non-member observer state. If their bid is successful, the Palestinians will be eligible to join various UN agencies and will also be able to bring allegations of Israeli war crimes to the International Criminal Court.

By Mya Guarnieri
It’s Saturday night in south Tel Aviv. Amine Zegata, a 36-year-old refugee from Eritrea is reopening the small bar he owns in the HaTikva neighbourhood. The pub was closed after Jewish Israelis smashed his windows and the bottles within during the race riots two weeks back. But Zegata has been assaulted twice since then. Violence against African refugees is continuing.

By Mya Guarnieri
Thousands of African refugees in Israel face expulsion to dangerous conditions in their countries of origin as Israel hardens its policies. The refugees are increasingly turning to protest.

MIDEAST: Into an Unsettled New Year

By Mya Guarnieri
An elderly Palestinian woman spent last week on hunger strike to protest violent attacks by Israeli settlers. Hana Abu Heikel went on the hunger strike on behalf of her family after settlers burned the family car during the previous weekend. Since Israeli settlers moved into the houses surrounding the Abu Heikel family home in Hebron in 1984, the Abu Heikels have seen eight cars burned. Six vehicles were also smashed by settlers.

By Mya Guarnieri
Speaking to the U.S. congress in May, Israeli Prime Minister Benyamin Netanyahu boasted that his country is a beacon of freedom in the Middle East and North Africa, that it is the only place where Arabs "enjoy real democratic rights".
ADVERTISEMENT ADVERTISEMENT