AMMAN, Jordan, Apr 12 2012 (IPS) - Two young women in brightly coloured hijabs and tight jeans stand on the edge of a freeway as cars whiz by. They watch the traffic, heavy in Amman where car ownership is skyrocketing by 10-15 percent a year. When there’s a break in the steady flow of vehicles, the women hold hands and race across the road. 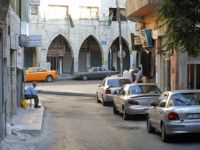 Amman’s streets are more for cars than for women. Credit: Michael Coghlan/CC-BY-SA-2.0.

It’s an odd sight here. The city is not pedestrian-friendly. Nor is it common to see women walking, much less darting, across freeways.

Though Western media has praised Amman’s urban planning as a step towards egalitarianism, highlighting the fact that the ‘Amman 2025’ urban master plan won the 2007 World Leadership Award in Town Planning, a visit to Amman, home to nearly three million people, reveals a starkly different picture.

One of the women, Sandra Hiari, is an architect, urban planner, and founder of Tareeq (Arabic for street), a website that focuses on city design in the Middle East.

“If you want to know if a place is safe or not, count how many women are walking on the street,” she said, adding that in Amman, women are visible only “in limited areas, like Rainbow (Street).”

Located in a bourgeois neighbourhood, the avenue is filled with chic cafes, bars, and restaurants, drawing enough of a crowd for women to feel safe, Hiari explained. But the street is not an example of the city’s planning. It is a rare exception. Because women often face harassment and catcalls, many avoid public spaces including Amman’s public transportation system, relying on cars and taxis instead.

Women, Hiari said, have been forced to “resort to structures –buildings – and to stay there rather than to use the street as a safe place where they can navigate through the city. I think we women are captured in bubbles,” she reflected. “We move from one bubble to another in the city.”

Despite closing the education gap, with girls and women attending schools and universities in slightly higher rates than boys and men, Jordanian women comprise a smaller percentage of the workforce than their male counterparts.

According to Hazem Zureiqat, a transportation planner and economist at Engicon, the lack of transportation options in Amman – home to half of the country’s population – is largely to blame for this discrepancy.

Zureiqat pointed to a recent survey that asked Jordanian women why they don’t work. “Many of them cited mobility and transportation (issues),” he stressed, meaning that, often, women simply cannot get to work.

While at least half of Jordan’s low-income households have a car, the male usually drives it, leaving women, who might otherwise work, stuck at home.

When asked if creating separate bus lines for women is the answer to their transportation troubles, Zureiqat quickly answered, “No, no. I don’t support that…you have to fix the (social issue) rather than just separating women (from men).”

He added that service needs to be improved in general, not just for women. Amman’s few bus lines run infrequently and are very unreliable. Up until some shelters were erected at bus stops recently, Zureiqat lamented that there had been “barely any shelter from the sun and rain” for commuters.

The Bus Rapid Transit (BRT) system was an ambitious project that sought to correct many of these issues with 32 kilometres of new, bus-only lanes. Each BRT lane would have carried three times the amount of people than a regular traffic lane.

Zureiqat said that the BRT wasn’t just about improving the movement of people throughout the city. It was also about “human dignity.”

Ironically, however, the Arab Spring led officials to scrap the project.

Zureiqat explained, “Fighting corruption became the buzzword here and everything (was called into) question.”

Former Amman mayor Omar Maani came under particularly intense scrutiny, as did the projects that the municipality had a hand in during his tenure from 2006 to 2011. That included the BRT; the Amman Institute for Urban Development, a city-funded “think and do tank” that sought, among other goals, to help reverse the country’s brain drain; and the Amman 2025 master plan, which emphasised public transportation and fostering a more pedestrian-friendly city.

Although the BRT passed an intensive governmental review that probed every aspect of the project – including its finances – it was sidelined in September of 2011.

In December 2011 Maani was arrested on unrelated fraud charges. He is currently out on bail.

While the Amman Institute for Urban Development was beset with problems from the get-go, the Arab Spring spelt the end for the inefficient organisation, including what many considered its “overinflated” wages.

“Officials (at the Greater Amman Municipality) are afraid to sign off on anything associated with the Amman Institute and the master plan,” Hiari said, because they don’t want to be “associated with corruption.”

These reactionary changes have left the city as unplanned, chaotic and isolating as ever.