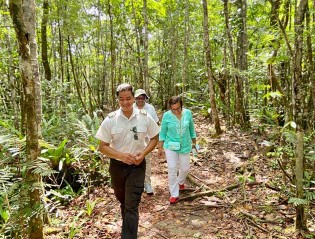 To Build Back Better from the Pandemic, We Must Overhaul the Way We Deal with Development Finance

By Patricia Scotland
Over the past 18 months, the impacts of the coronavirus pandemic have transformed our lives and prompted a period of deep reflection as a global community. In some sense, we are only now starting to understand our vulnerabilities, and in particular, how deeply exposed and interconnected we are as people, communities and as countries.

By Patricia Scotland
Among the greatest gifts with which I have been blessed were parents who instilled in me a deep-rooted sense of identity, and the unequivocal belief that there was no difference between what a boy and a girl could achieve. This assurance sustained me while growing up, as the tenth child out of twelve wonderful siblings, and through the numerous times when it was suggested by others that I would never succeed, simply because I was black, poor and female.

By Patricia Scotland
The United Nations Ocean Conference offers an historic opportunity to safeguard the ocean environment and support small island and vulnerable developing coastal states, who depend on the seas for national economic growth and sustainable development.
ADVERTISEMENT ADVERTISEMENT