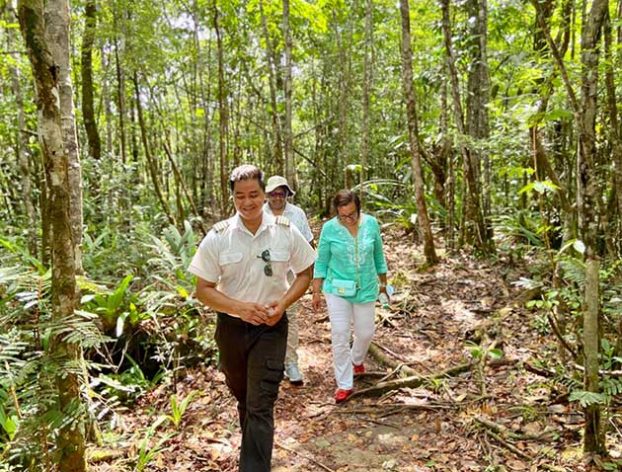 GEORGETOWN, Guyana, Jan 17 2022 (IPS) - If the ocean is the lifeblood of the Commonwealth, then forests are the lungs that breathe life into its whole system. From the vast boreal woodlands of Canada to the rich primary forests of Papua New Guinea, the Commonwealth covers nearly a quarter of all forest land in the world – an estimated 900 million hectares. These biodiversity havens not only house about half of all animal species on earth, they also give us clean air, water and food, supporting the livelihoods of millions of people while tackling climate change.

Last weekend, I had the privilege of trekking the stunning Amazonian rainforests of Guyana. It was my second time to do so since visiting the Iwokrama Reserve in 2016, but I was still left awestruck by the sight of rolling jungle-shrouded mountains that stretched far as the eye could see, home to jaguars, anacondas and hundreds of exotic bird species. Listening to the thunderous vibrations of the Potaro River plunging 250 metres in the world’s largest single drop waterfall, Kaieteur Falls, I wondered how so much of humankind had become distanced from these wonders of nature.

Globally, forests such as the Amazon are being destroyed at alarming rates, placing increasing pressure on the wildlife and driving many species into extinction. The UN estimates that 420 million hectares of forest – roughly the land area of the entire European Union – have been lost since 1990, despite the rate of deforestation dropping in recent years. The main driver is no surprise: rapid agricultural expansion is needed to feed the demands of an ever-growing global population, whether through large scale commercial farming or local subsistence agriculture.

Fortunately, in Guyana, where more than 80 percent of the total land area is forest, deforestation rates are extremely low – less than one percent – thanks to strong government policies and international support. However, the lucrative mining of bauxite and gold as well as the recent discovery of oil, which has propelled the country to become one of the fastest growing economies on the planet, still presents a common dilemma for developing nations. This is the balancing act of delivering a healthy economy, social cohesion and equality, while protecting the environment and fighting climate change fuelled by the burning of fossil fuels.

Just a few months ago, I was in Glasgow for the UN Climate Change Conference known as COP26, meeting with countless negotiators, experts and world leaders about how the international community should respond to the climate crisis. In a world where we are already grappling with the frightening effects of a heating planet, I observed a growing awareness amongst decisionmakers of the need to shift to sustainability in order for human civilisation to survive. At the same time, it was clear that almost all countries were also motivated by the drive for economic growth, job creation and enhancing their so-called standard of living.

In this regard, it was a statement by Guyana’s President Irfaan Ali during a high level event held at the Commonwealth Pavilion at COP26 that resonated with me: “Whatever plan we come up with at the national, regional and international levels must be comprehensive in its outlook. We cannot only look at climate change in isolation of food security, or debt security, or national prosperity. We have to find an integrated way which leads to an integrated solution.”

It is precisely this line of thinking that has spurred an increasing number of Commonwealth member countries to support the ‘Call to Action on Living Lands’, which I announced more than a year ago. This call to action lays the groundwork for a Commonwealth Living Lands Charter to be proposed for adoption at the forthcoming meeting of Commonwealth Heads of Government scheduled for later this year in Kigali, Rwanda. The proposed Charter recognises those valuable links between different and sometimes conflicting interests of member countries. It will seek to catalyse the global political momentum to address climate action and resilience, biodiversity loss and land degradation, in a coordinated and cohesive approach. Commonwealth countries will be able to share learning and cooperate in developing and implementing solutions. When implemented successfully, this will transform the climate, biodiversity and development agendas.

But what does that mean for ordinary Commonwealth citizens? In a word, hope. The Call for Action on Living Lands enables governments to cooperate and pave the way to learn about and access more sustainable, inclusive, innovative and efficient ways of growing food, making a living off the land and adapting to climate change. Focus areas to be explored within the Charter include climate resilient agriculture, soil and water conservation and management, sustainable green cover and biodiversity, and the active engagement of indigenous people. These are standing topics of discussion when I meet with Commonwealth leaders, including Guyana’s top decision makers with whom I convened this week.

My visit to Guyana was both rewarding and deeply moving. However, it was when I called on the Santa Aratak community, a village of around 3,000 indigenous Arawak located 25 miles from the capital city of Georgetown, that the significance of the trip came full circle. Like most indigenous groups, Amerindians make the best land stewards because of their traditional values and principles around living sustainably, understanding natural ecosystems and maintaining the pristine state of the environment. Their world view is similar to indigenous cultures elsewhere in the Commonwealth, including parts of Africa and the Pacific Islands. Perhaps as we embark on this new year, we should take their vision as an inspiration – we should all see ourselves as stewards of our living lands.

The Right Honourable Patricia Scotland is the sixth Secretary-General of the Commonwealth and the first woman to hold the post. She leads an organisation of 54 countries working together to promote democracy, peace and sustainable development. Born in Dominica and raised in the United Kingdom, she was also the first woman to be named Attorney General for England and Wales and served in various ministerial roles.

This piece was first published on Stabroek Sunday.