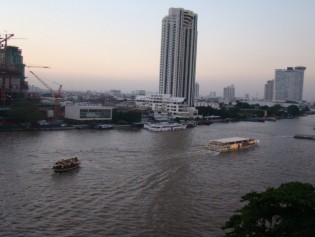 By Sinsiri Tiwutanond
At the start of the year the pollution in Vietnam’s capital, Hanoi, reached six times the World Health Organization’s guideline levels for air quality. Yet the levels, which appear higher than those of South Korea’s capital Seoul—where most people monitor the air pollution levels daily—is not treated with equal concern because of a lack of general awareness. This is despite the fact that air pollution has become the largest cause of premature deaths in Asia.

By Sinsiri Tiwutanond
Thailand’s industrial sector must focus on sustainable and green development to remain competitive in the region.

By Sinsiri Tiwutanond
Energy efficiency in industries presents a unique opportunity for Thailand’s environmental and economic policies as regional trends push towards more inclusive and sustainable green cities for the country and its neighbors, says the Director-General of the Global Green Growth Institute (GGGI) Dr. Frank Rijsberman.
ADVERTISEMENT ADVERTISEMENT