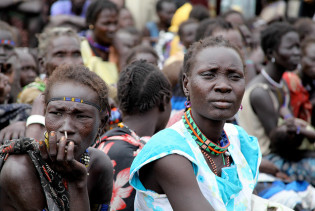 By Skye Wheeler
On the last day of July, South Sudanese soldiers shot dead two unarmed women, Anyibi Baba and Ateil Rio. The killings were the latest in a pattern of grave violations against civilians by Sudan People’s Liberation Army (SPLA) soldiers fighting a Murle rebel group in Jonglei state.

SOUTH SUDAN: Changing of the Guard

By Skye Wheeler
In the war-devastated South Sudan, a region with a population of over eight million people, Yeneneh Mulugeta is the only permanent ophthalmologist.

By Skye Wheeler
Motorcycle Juba style: sit as far back on the seat of the bike as possible. Hold handlebars only loosely when riding but rev frequently whenever stationary.

By Skye Wheeler
"The liberation struggle is over. Why are we still killing ourselves?" South Sudan's President Salva Kiir asked a meeting of chiefs, exasperation clear in his usually even-toned voice.

By Skye Wheeler
Two Sudanese communities that face each other across one of Africa’s most contentious borders sat together recently in the shade of three large red tents to discuss a future tied to a recent past of bloodshed.

By Skye Wheeler
A recent presentation at parliament by the South's Finance Minister gave a few cursory details of how the South's army managed to spend 99.6 percent of its budget by June. At the end of the public session, the South's Parliamentary Affairs Minister Martin Elia told journalists not to write about the presentation for security reasons.

By Skye Wheeler
A lion attempted to devour Dinka chief Makom Majong Makom once. It was during the long years of Sudan's north-south conflict that also saw a militia attack nearly destroy his rural South Sudanese community.

By Skye Wheeler
When Sabrina Dario Lokolong, the Speaker of South Sudan's Eastern Equatoria State Assembly, enters or leaves Parliament, all the other members of parliament must stand up.

By Skye Wheeler
Nyandeng Akot rushed out of the rude shelter of thatch and plastic sheeting pinned against the side of a tree with sticks. Grabbing a passing aid worker's arm, she said she has nothing except the four children that she grabbed when she began running from renewed fighting in Sudan's Abyei area a month ago.
ADVERTISEMENT ADVERTISEMENT