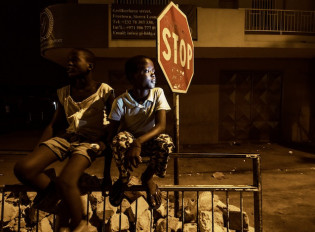 By Tommy Trenchard
On the fourth floor of a new office block in western Freetown, Cecil Williams sits beneath posters of idyllic tropical landscapes as he discusses the many natural attractions that once brought tourists flocking to the small West African nation of Sierra Leone.

In the village of Makonkonde in western Sierra Leone, Mabinti, who no longer knows her age, sits on a low wooden stool in the dappled shade of several palm trees. She clutches a solitary papaya fruit in hands toughened by a lifetime of hard manual work.

By Tommy Trenchard
On a steamy, starless night in Sierra Leone’s capital, Freetown, a teenager runs desperately down a potholed street before being violently brought to the ground by a bystander. As word spreads that a thief has been caught, young men come running from all directions.