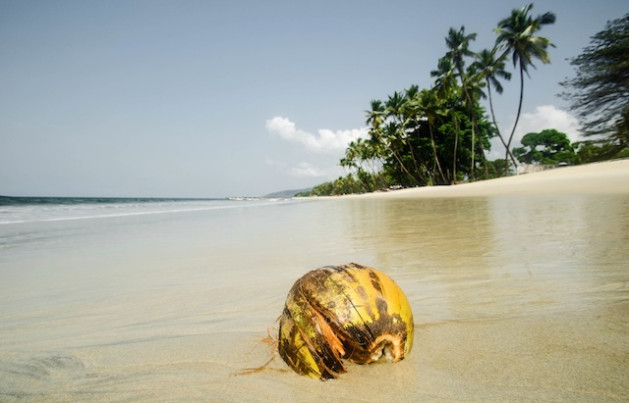 A solitary coconut lies on the fine sand of Tokeh Beach, Sierra Leone, about 20km south of Freetown, just over half way down the Freetown Peninsula. The area is home to a small fishing community. Tommy Trenchard/IPS

FREETOWN, Mar 8 2013 (IPS) - On the fourth floor of a new office block in western Freetown, Cecil Williams sits beneath posters of idyllic tropical landscapes as he discusses the many natural attractions that once brought tourists flocking to the small West African nation of Sierra Leone.

“Very few countries have the mountains dropping down to the sea, with unspoilt beautiful beaches,” he tells IPS. “Sierra Leone is just waiting to be explored.”

Williams is the head of the National Tourist Board, and the man tasked with reviving an industry that used to provide much needed jobs and revenue to Sierra Leone. In other circumstances, his job should not have been difficult – the country boasts a coastline unrivalled in West Africa, with dazzling sandy-white beaches.

Indeed, such is the beauty of one beach near Freetown that before the war it was featured as the backdrop to an advertisement for Bounty chocolate bars, offering the consumer “a taste of paradise”. Beaches line much of the country’s 360 kilometres of Atlantic coastline, the majority of them strangers to tourism.

But unlike Ghana or the Gambia which have managed to cultivate thriving tourism industries – over 800,000 tourists visited Ghana in 2009, according to the latest World Bank figures – on Sierra Leone’s unspoilt beaches you are likely to be the only tourist.

Eleven years after the end of Sierra Leone’s civil war, which lasted from 1991 to 2002, the country is fighting a new battle – to change its image in the eyes of potential tourists in Europe and America who tend to associate it more with child soldiers and blood diamonds than they do with sunshine and beaches.

Ibrahim Kargbo, a former minister of information and current special advisor to President Ernest Bai Koroma, acknowledges the problem. “We have always said that we need to rebrand the country,” he tells IPS. Kargbo explains that the ministries of tourism, foreign affairs and information are the core of the extensive rebranding exercise, “so that people can know what is happening here and be happy to come to the country.”

The tourist board is also heavily involved in trying to alter perceptions of Sierra Leone, but Williams says a lack of funds is imposing limits on the effectiveness of the project. “We have to market Sierra Leone in a more aggressive manner, but it takes money,” he explains.

The board is currently restricted to what it terms “soft marketing” – attending international travel fairs, producing brochures, posters and short videos, and inviting foreign journalists to come and see the country for themselves.

But after peaceful elections last November, deemed to be largely free and fair by observers, there is a feeling that Sierra Leone is ready to put its troubled past behind it, and finally shed the violent image that has kept visitors at bay for so long. Freetown now feels no less safe for a European than parts of London.

At his inauguration in February, Koroma, embarking on a second five-year term in office, addressed an audience in the national stadium about the potential for tourism in Sierra Leone: “We have a country with beautiful landscapes…our beaches are unsurpassed…the physical beauty of our hills is breath-taking, and our land is home to rare species of animals and birds.”

Thomas Armitt, founder of travel company West Africa Discovery, is also confident that a tourism revival is imminent. “I’m sure international tourists will start arriving in the next year or two,” he tells IPS. “I first came here in 2011…and I feel in the air that things are changing here.”

Armitt, who is from the United Kingdom, is set to launch a new company in Sierra Leone, offering off-the-beaten-track tours with a focus on sustainability and community living. He sees West Africa as “the last frontier of tourism.”

“People are looking for new destinations,” he explains. “And this is, for me, an ideal destination which can’t be kept a secret for much longer.”

He does, however, acknowledge that challenges remain in doing business in Sierra Leone. “You have to get used to a whole new business culture, so we are expecting a slow start,” he says, though he sees enormous long-term potential.

Sierra Leone is also still affected by a fundamental lack of tourist infrastructure. Simply getting from the airport, which is situated on one side of a wide estuary, to a Freetown hotel usually requires a lengthy journey over land and water. Hotels are generally expensive for the mediocre service they provide, and road transportation can be tricky.

But here too, change is in the air. Against the backdrop of an economic boom driven by the mining sector, new roads are being built across the country, as well as a new and more accessible airport. A school for workers in the tourist industry is also being revamped, in a bid to improve standards of service.

“Tourism facilities are being constructed in every district,” the president’s spokesperson, Unisa Sesay, tells IPS, adding that there are also improvements in telecommunications, internet connections and accommodation. He says the government is also working on creating an “enabling environment” for private sector investors in the tourist industry.

The Radisson and the Hilton are just two of the hotel chains due to start operating in Freetown in the next two years, while at least two cruise liners have also added Freetown to their itineraries.

Sinneh Bangura is a fisherman living in the village of John Obey on the Freetown Peninsula. He too is keen to see more visitors coming to Sierra Leone. “It would be good for everyone. It could bring development to our community,” he says.

Youth unemployment stands at over 60 percent in Sierra Leone, and it is hoped that a revival of the tourism industry could bring much-needed jobs to coastal communities.

Williams also sees enormous potential in the tourist industry, particularly at the top end and in eco-tourism, as a driver of development in Sierra Leone.

“In five to 10 years’ time tourism will be the number one sector….the number one industry in terms of revenue, in terms of benefits,” he tells IPS, arguing that ultimately it is Sierra Leoneans themselves who are the key – “because despite all we’ve been through, this is a country visitors can come to and feel at home.”