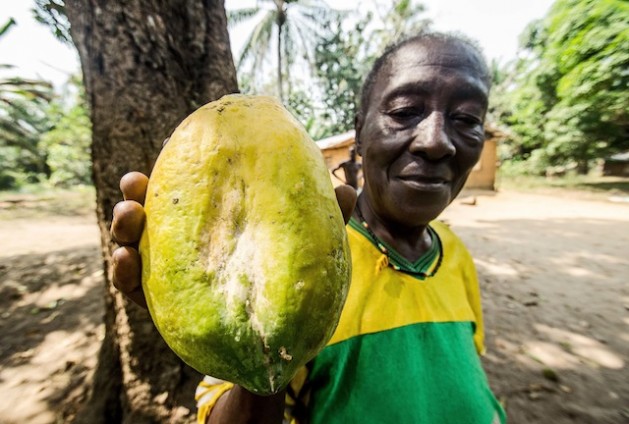 Mabinti displays a papaya in the village of Makonkonde. Like many farmers in rural Sierra Leone, she struggles to get her fruit to the market. Credit: Tommy Trenchard/IPS

FREETOWN , Jan 31 2013 (IPS) - In the village of Makonkonde in western Sierra Leone, Mabinti, who no longer knows her age, sits on a low wooden stool in the dappled shade of several palm trees. She clutches a solitary papaya fruit in hands toughened by a lifetime of hard manual work.

Small-scale farming is not an easy way to make a living in rural Sierra Leone. Mabinti’s only real chance of selling her papaya is by waiting for customers travelling along the sandy track running through town, which sees just one or two motorbikes per hour.

The alternative – transporting the fruit by bike to the nearby town of Waterloo – would cost more than Mabinti would receive from the sale.

Like many others in this West African nation’s underdeveloped fruit industry, she has suffered from the lack of an accessible and profitable market for her papayas. The domestic market for Sierra Leone’s fruits has its limits. It offers very low prices for some products, such as mangoes, and can be effectively inaccessible to growers based far from the larger urban centres.

In these conditions, much of the country’s fruit harvest has traditionally gone to waste, particularly in rural areas, and the sector continues to bear the hallmarks of subsistence, rather than commercial production, with most fruit consumed locally.

“Over the past years a lot of our fruits have perished,” Samuel Serry, a spokesman at the Ministry of Agriculture, tells IPS. “Most of them have just got rotten in the rainy season.”

The ministry, in conjunction with the Food and Agriculture Organization of the United Nations (FAO), has been undertaking efforts to commercialise farming in Sierra Leone by improving access to markets, promoting the addition of value to the country’s raw products and providing support to socially responsible investors.

The FAO is also encouraging the formation of farming collectives, each consisting of around 35 farmers, and is establishing a series of Agri-Business Centres (ABCs) across the country, each of which will be used by three or four collectives.

This system, according to the organisation’s representative of programmes Joseph Brima, is hoped to improve output, provide access to processing equipment and storage facilities, and facilitate the passage of goods to market.

But the FAO, like its partners at the ministry, is also trying to attract investors capable of processing and adding value to Sierra Leone’s crops, and in doing so providing a lucrative new market for local farmers.

One such company is Africa Felix Juice, a manufacturer of Fairtrade tropical fruit juice and concentrate for export to Europe. Africa Felix Juice represents a new business model that offers Sierra Leonean farmers a guaranteed market and a fair price for their fruit.

What makes Africa Felix Juice unique, says its Italian founder and CEO Claudio Scotto, is that it is the first company in Sierra Leone exporting a manufactured product to Europe since the country’s 10-year civil war ended in 2002.

Like many African nations, Sierra Leone has traditionally exported raw materials including rutile, iron ore, and most famously, rough diamonds.

By turning fruit into concentrate at a small factory in the village of Newton, near the capital Freetown, Africa Felix Juice adds value to its product, employs 45 permanent staff and can afford to offer higher prices to the 2,000 mango farmers whose fruit they buy.

“It was very easy to persuade the farmers to sell me mangoes, as they were going rotten all the time,” says Scotto, who traces the origin of the business to meeting his Sierra Leonean wife.

Even in places where a market already existed, because Africa Felix Juice is Fairtrade certified they pay well over the normal price for produce – up to three times as much in the case of rural mango producers. In turn they encourage increased production.

In the village of Garahun, local chief Momodou Kamara is thinking of planting more mango trees after the village started selling the fruit to Africa Felix Juice. He explains that the villagers used to have to transport their mangoes to Waterloo, where they would sell them for 500 Leones (10 cents) per dozen. Now they receive more than three times that. “There is profit in it now,” he says.

Scotto blames the legacy of the civil war for the slow growth of agribusiness in the last decade. “The absence of peace can just destroy the whole platform for business,” he says, citing a lingering lack of trust as an obstacle to successful business enterprise.

But Sierra Leone has come a long way since 2002. After a peaceful presidential election last November in which the incumbent President Ernest Bai Koroma won a second term in office, there is a powerful sense that the country is now fully open for business.

Abdullah F. Koroma, who stopped growing pineapples after rebels vandalised his irrigation system during the war, this year restarted production on his farm in the village of Mobangba. “The country has not been stable (until now),” he tells IPS.

While much attention is paid to recent large-scale mining operations in the country, agriculture, says Serry, contributes 45 percent of the country’s GDP and employs over 3.5 million people, out of a total population of less than six million.

“There is a very great potential in the agricultural sector. Because diamonds are not forever, but the land will always stay.”