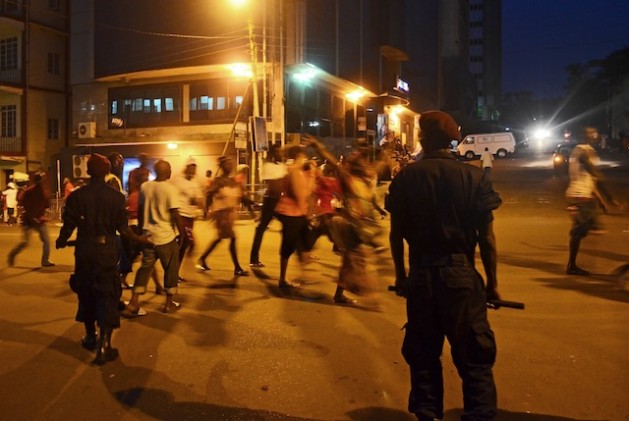 FREETOWN, Jan 16 2013 (IPS) - On a steamy, starless night in Sierra Leone’s capital, Freetown, a teenager runs desperately down a potholed street before being violently brought to the ground by a bystander. As word spreads that a thief has been caught, young men come running from all directions.

Within a minute the narrow street is packed, and the boy, still protesting his innocence, receives the first of a hail of blows that will continue unabated for about forty minutes.

With sticks, bricks and rocks picked up from the dusty roadside the assailants beat, stamp on and slash at the prone figure in the dirt. “We are going to kill him,” says one man excitedly, repeatedly swinging a heavy stick into the boy’s head and neck. Blood pours from a large gash in his thigh, and he clutches his head in pain.

Eventually, stripped naked and barely able to stand, the traumatised youth is ejected by the mob, and left to his fate. “That one will die during the night,” says one man. “He is a thief,” he continued by way of explanation, “so he is a very bad man.”

Vigilante justice is rife in this West African country of nearly six million people, where an inefficient judicial system, widespread lack of trust in the police, and the legacy of self-defence groups operating during the country’s long civil war are causing civilians to take justice into their own hands.

Ten years after the end of its civil war, Sierra Leone is a peaceful country. Recent presidential elections were characterised by massive anti-violence campaigns and passed smoothly. But while general violence is widely condemned, the spontaneous beating of alleged petty criminals attracts little criticism.

Ibrahim Tommy, executive director of the Centre of Accountability and the Rule of Law (CARL), a legal NGO operating out of Freetown, links vigilantism directly to the failings of Sierra Leone’s judicial system, which struggles to hold petty criminals to account.

“What the public does is to respond to the weaknesses in the justice system, the lack of capacity…to provide justice in a reasonable period of time,” Tommy tells IPS. “So what they do is to beat the person up. As long as someone has actually had enough time and opportunity to beat up the suspect, he or she feels satisfied.”

“If we hand him over to the police, he will just be back here the next day,” says one man, during the beating of a teenager caught stealing a mobile phone.

Tommy highlights in particular the crippling delays that lead to low witness participation in court cases. “What happens is somebody is arrested, taken to the police station…the person is arraigned, but nobody comes up to testify. At that point the magistrate is left with no option but to discharge…To sustain a conviction you need witnesses.”

“People in this country do not go to the courts to serve as witnesses,” agrees Ibrahim Samura, assistant superintendent of the Sierra Leone Police.

Many are reluctant to waste their time in cases hit by massive delays. Others worry that by providing evidence they are putting themselves at risk of retribution. Even the victims themselves do not turn up in court, Samura tells IPS.

But according to Tommy, the lack of witness participation is only one of the factors behind the low conviction rate. He alleges that some criminals manage to make deals with police officers to avoid facing charges. “Most times they are detained at the police cells, and after a day or two, after the public forgets about it, they are released back into society.”

He suggests that the culture of vigilantism and “street justice” has its roots in Sierra Leone’s decade-long civil war, when civil defence groups rose up in response to the failure of the military to tackle the threat posed by the Revolutionary United Front rebels.

“Vigilantism really started in earnest during the war,” he says. “This is when members of the public lost faith in the defence forces and thought that they needed to do something about their own safety and security, so they tried to fill in the void that was left by the disgraceful conduct of military officers.”

Today vigilante violence is a common occurrence in Freetown. At the city’s main hospital, nurse Dura Kamara is used to treating victims of street justice. “We get them coming in at least once or twice a week,” he explains. “They are in a very serious condition. People throw acid on them, beat them up, break their bones, use machetes on them.”

But many never make it as far as the hospital. At the city morgue, attendant Alhaji Kanjeh sits in a ramshackle office decorated with withered human limbs in dusty glass cases. “It is very common, people who are caught stealing are beaten to death,” he tells IPS.

He displays a photo of a teenager who was killed by a mob after an event at the national stadium. He had tried to rob a passing motorist and had paid with his life. “We never knew his name,” says Kanjeh. Victims of vigilante justice brought in to the morgue have been as young as 15.

Thieves who die at the hands of vigilante mobs are rarely claimed or identified by relatives, who are wary of the stigma attached to criminality. “When the police come here with the body, we will enter it as ‘unknown’,” Kanjeh says. When relatives fail to turn up, the cadavers are taken away and buried anonymously in mass graves.

Owizz Koroma, the government’s chief forensic pathologist, says mob justice has become routine. He says a recent increase in cases of vigilante-justice deaths is posing challenges for his team, which is tasked with burying the bodies.

“I am really under enormous pressure as those things are not budgeted for … the burials and the fuel. It sounds disturbing but that’s what happens.”

“Mob violence is a cause of concern,” added assistant superintendent Samura. “People do not appreciate the rights of criminals.” He said the police are taking the issue seriously, and are doing their best to ensure the perpetrators are brought to justice.

They are also striving to restore faith in the justice system’s ability to hold petty criminals to account, in an attempt to dissuade the public from taking matters into their own hands. “The lack of trust (in the police and judiciary) is unfortunate,” he says.

The solution, he argues, lies in large-scale public ‘sensitisation’. “People do not know their civic responsibilities…We need to engage and educate the people,” he tells IPS.

He says the police still rely on the public to apprehend criminals, but rather than administering spontaneous mob justice, they should hand suspects over to face trial, and fulfil their civic duty by testifying in court.

But until faith in state institutions is restored, petty criminals will continue to face the unforgiving justice of the street, many ending their days as nameless victims in mass graves.