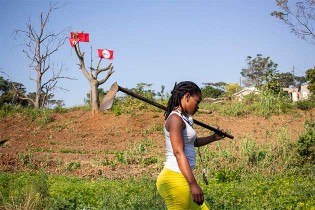 Sleep Now in the Fire

By Vijay Prashad
Israel’s massive war machine attacks the Occupied Palestinian Territory (OPT) with total disregard for international law. Since the OPT is an occupied territory, the United Nations does not permit the occupier – Israel – from altering the character of the land under occupation. However, this has not impeded Israel, whose attempt to evict families in Jerusalem’s Sheikh Jarrah neighbourhood resulted in the entry of Israeli border troops inside the al-Aqsa mosque, followed by waves of aerial bombardment that has resulted in daily death and injury toll that will be known only when the dust settles.

By Vijay Prashad
On a Sunday night on 21 March 2021, gunmen stopped Juan Carlos Cerros Escalante (age 41) as he walked from this mother’s home to his own in the village of Nueva Granada near San Antonio de Cortés (Honduras). The gunmen opened fire in front of a catholic church, killing this leader of United Communities in front of his children. Forty bullets were found at the scene.

If I Didn’t Believe, I Wouldn’t Know How to Breathe

By Vijay Prashad
Here’s a story that encapsulates the terrible situation of our world: Associated Press reporters were on a Turkish coast guard vessel which picked up 37 migrants, including 18 children, from two orange life-rafts in the Aegean Sea on 12 September. The refugees were from Afghanistan, a country that shudders from an endless war. One of the refugees, Omid Hussain Nabizada told the reporters that the Greek authorities held them in Lesbos, put them onto life rafts, and then sent them into the turbulent seas. They were left there to die.

These Migrant Workers Did Not Suddenly Fall From the Sky

By Vijay Prashad
Madness engulfs the planet. Hundreds of millions of people are in lockdown in their homes, millions of people who work in essential jobs – or who cannot afford to stay home without state assistance – continue to go to work, thousands of people lie in intensive-care beds taken care of by tens of thousands of medical professionals and caregivers who face shortages of equipment and time. Narrow sections of the human population – the billionaires – believe that they can isolate themselves in their enclaves, but the virus knows no borders. The global pandemic driven by the variants of the SARS-CoV-2 virus holds us in its grip; even as China seems to have bent the curve of infections, the charts for the rest of the world are forbidding: the light at the end of the tunnel is as dim as it has ever been.

Your Arrow Can Pierce the Sky, But Ours Has Gone into Orbit

By Vijay Prashad
On Wednesday, 15 January, China and the United States agreed to suspend their full-scale trade war. From February 2018, the United States placed tariffs on Chinese goods that entered the US market, and then China retaliated. This tit-for-tat game continued for almost two years, causing massive disruption in the global value chain. In October 2019, the International Monetary Fund’s G-20 Surveillance Note reported that the global GDP suffered by a 0.8% drop merely because of the tariffs on goods such as aluminium, steel, soybeans, and car parts between the United States and China. Western attacks on Chinese 5G technology – and on the tech firm Huawei – are part of the pressure on China to buckle before the US-led order. But China did not bend. As a prelude to the ‘phase one’ deal, the United State Treasury Department stopped calling China a ‘currency manipulator’, a term that has haunted China’s for decades.

By Vijay Prashad
(Tricontinental) – Word comes from friends in Iran of foreboding, a general sense of fear that the United States might bomb the country at any time.

We have Stolen His Land. Now We Must Steal His Limb

By Vijay Prashad
(Tricontinental) – When the late South African artist Tito Zungu wanted to depict the world of the migrant labourer, he settled on the envelope. It was by infrequent letters that the migrant would be able to be in touch with family – letters dictated to professional letter writers at one end, which would be read out by professional letter readers at the other. With pencil and coloured pens, Zungu drew airplanes and boats as well as transistor radios on these envelopes – images that showed how the migrants moved and how they sought some entertainment.

By Vijay Prashad
(Tricontinental) – The mood in Caracas (Venezuela) is sombre. It appears that the attempted coup against the government that began on 23 January is now substantially over (as the Venezuelan Foreign Minister Jorge Arreaza tells me). The Lima Cartel is divided. The Europeans have cold feet. On the one-month anniversary of that attempt, a massive crowd of the poor gathered in the centre of Caracas to demonstrate their support for the Bolivarian Revolution. An elderly couple carried a sign which captured the mood – Somos los Invisibles. Somos los Invensibles. Venceremos (We are the Invisible. We are the Invincible. We will Overcome).

By Vijay Prashad
(Tricontinental) – As the United States and its allies put pressure on Venezuela, a poem by the Salvadoran radical Roque Dalton (1935-1975) clarifies the structure of politics in Latin America. Dalton came from one of Latin America’s smallest countries, El Salvador, which he used to call the little finger (pulgarcito). A deeply compassionate poet, Dalton was also a militant of the People’s Revolutionary Army, whose internal struggles claimed his short life. El Salvador, like so many other Latin American states, struggles to carve out its sovereignty from the tentacles of US power. That hideous Monroe Doctrine (1823) seemed to give the US the presumption that it has power over the entire hemisphere; ‘our backyard’ being the colloquial phrase. People like Dalton fought to end that assumption. They wanted their countries to be governed by and for their own people – an elementary part of the idea of democracy. It has been a hard struggle.

By Vijay Prashad
(Tricontinental) – On 15 September 1970, US President Richard Nixon and National Security Advisor Henry Kissinger authorised the US government to do everything possible to undermine the incoming government of the socialist president of Chile, Salvador Allende. Nixon and Kissinger, according to the notes kept by CIA Director Richard Helms, wanted to ‘make the economy scream’ in Chile; they were ‘not concerned [about the] risks involved’. War was acceptable to them as long as Allende’s government was removed from power. The CIA started Project FUBELT, with $10 million as a first instalment to begin the covert destabilisation of the country.

By Vijay Prashad
(Tricontinental) - In June 1931, the Italian Communist Antonio Gramsci wrote a letter to Giulia Schucht, who lived in Moscow and with whom he had two children. One of the children – Delio – had taken an interest in literature, with a particular fascination for fantasy literature. This gave Gramsci, locked in a fascist prison, the opportunity to recall a story from his village on the island of Sardinia.

By Vijay Prashad
Over two days – 8 and 9 January – over 160 million workers went on strike in India. This has been one of the largest general strikes in the world. The workers, exhausted by almost three decades of neo-liberal policies and by the attack on the rights of workers, came onto the streets to make their case for better livelihood and workplace democracy. Blockades on train tracks and on national highways closed down sections of the country. In Bengaluru, Information Technology (IT) workers joined the strike, while in Himachal Pradesh – see the picture above from the town of Hamirpur – workers gathered to demand an end to precarious employment in government service. Workers from a broad range of sectors, from industrial workers to health care workers, joined the strike. There has been no response from the government. Please read my report on the strike.

By Vijay Prashad
On 1 January, 5.5 million women formed a 620-kilometre wall across the length of the Indian state of Kerala (population 35 million). This was not like Donald Trump’s wall across the US-Mexico border, a wall of inhumanity and toxicity. The wall of these women was a wall for freedom, a wall against traditions whose purpose is to humiliate.

By Vijay Prashad
Addis Ababa, Ethiopia, 2013. It is past midnight. The aircraft come in from Saudi Arabia carrying workers who had been hastily ejected. They had gone from Ethiopia to work in a variety of jobs in a Kingdom flush with oil wealth.
ADVERTISEMENT ADVERTISEMENT