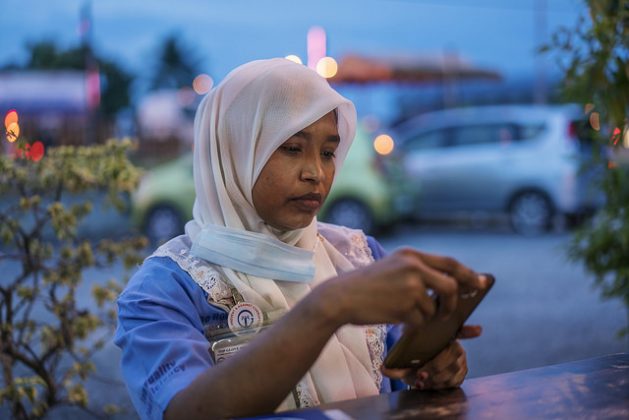 Migration has allowed Sahanaz Parben to place her son in an elite cadet college, normally the domain of the well-to-do. She’s bought property in Bangladesh, and when she goes back she hopes to set up on her own. Photo: Shahidul Alam/Drik/Majority World

It is past midnight. The aircraft come in from Saudi Arabia carrying workers who had been hastily ejected. They had gone from Ethiopia to work in a variety of jobs in a Kingdom flush with oil wealth.

It is December 2013. Ethiopian migrant workers descend from the aircraft. They carry plastic bags that hold their belongings. There are few signs that they have benefitted from their hard labor in Saudi Arabia. A few of the migrants walk down without shoes. The air is chilly. They must be cold in their shirts and pants, their feet on the hard ground.

What was the reason for their expulsion? The Saudi authorities said that these were migrants who came into the country without papers. They had crossed the dangerous Gulf of Aden in rickety boats. Saudi Arabia welcomes these migrants, even those without documents, largely because they – under duress – offer their services at very low rates of pay. At punctual intervals, the Saudi government goes after these undocumented workers, arresting them in public, throwing them in deportation camps in Riyadh and then shipping them home.

That was in 2013. Between June of 2017 and the end of the year the Saudi authorities detained 250,000 foreigners and sent home 96,000 Ethiopians. When the Saudi government feels particularly vicious, it carts the Ethiopians to the Saudi-Yemen border and merely leaves them on the Yemeni side. Yemen, still bombed almost daily by Saudi Arabia, is hardly the place to welcome desperate Ethiopians.

The periodic cycle of allowing undocumented workers into the country and then humiliating them by this kind of public ejection maintains the workers in fear and allows the human traffickers and the employers to keep wages as low as possible. There is no one to complain to.

Why do the Ethiopians keep returning to Saudi Arabia? Ethiopia is a country in dire economic distress. Six to nine million Ethiopians have needed food aid of one kind or another last year, as severe drought and poverty have combined to create a near famine situation. Southeastern Ethiopia, from where many of the migrant workers come, has seen the drought destroy livestock herds and reduce crop production. 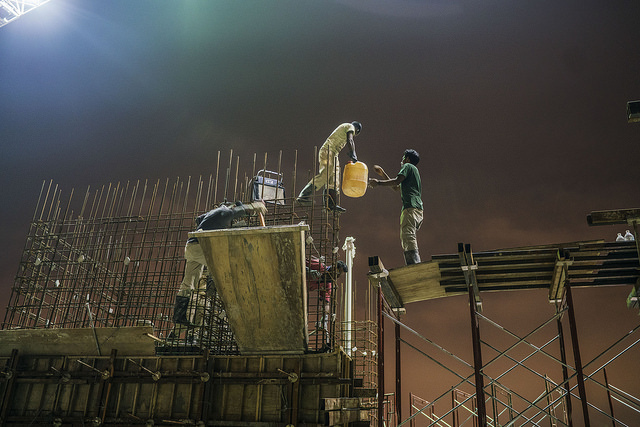 Bangladeshi migrant worker Abul Hossain says it is against the law to be working at night in construction sites in Malaysia, but it is common practice and expected of the workers. Abul works in a construction site in Ampang in Kuala Lumpur. Photo: Shahidul Alam/Drik/Majority World

It is in this same area that Ethiopia hosts 894,000 refugees from Eritrea, Somalia, South Sudan and Sudan. Those refugees come for reasons of hunger and conflict. Last year alone, 106,000 refugees entered Ethiopia, most of them from South Sudan (whose citizens now number 420,000 in Ethiopia). A country that hosts almost a million refugees – itself wracked by distress – sends perhaps a million to the Arabian Peninsula (there are half a million in Saudi Arabia itself). It is a cycle of refugees that now defines the planet.

I can’t get the lack of shoes out of my mind. Ethiopian workers say that they are mistreated routinely in Saudi Arabia – sexual violence against domestic workers, beatings of all workers, harassment by the police. This has become normal. It is the way we live now.

While in Dhaka, I visited the Drik Gallery III, where I saw the exhibition of photographs taken by Shahidul Alam of Bangladeshi migrants to Malaysia. The pictures are vivid illustrations of the hope in the eyes of the migrants and the great sense of disappointment, as life does not turn out as it was promised for most of them. Alam’s photography shines – his own personal compassion draws out emotions of great sincerity from the men and women he photographs.

Alam gave me his book – The Best Years of My Life – which collects the pictures that I saw in the gallery, with a moving text that he wrote to accompany his photographs. The book traces the journey of Bangladeshi migrants – chasing a dream – to Malaysia’s factories and fields, where they work for low wages, get cheated by traffickers, by officials and by their peers. The lure of savings to help their families at home leads the workers to sacrifice their own lives. Sahanaz Parben’s son (age 11) calls her aunty; he barely knows her. Babu Biswas’s children have seen him briefly three times over the past decade. “They are doing well,” he says.

The legal status of these migrants is often unclear. It is precisely their tenuous legal status that forces them to bid down the rate of wages. But the money of the ‘illegal’ migrant is not illegal. It is welcomed into Bangladesh. There are roughly 9 million Bangladeshi migrants (according to the World Bank). They send home 15 billion dollars. Based on a five-year average, this amounts to 10% of Bangladesh’s Gross Domestic Product.

This is not as high a percentage as that of Liberia, where more than a quarter of its GDP comes from remittances from migrant workers. These economies would crumble without the small amounts of money from millions of workers that adds up to large amounts of foreign exchange for these countries. It is worth noting that Foreign Direct Investment (FDI) into Bangladesh is merely 0.9% of its GDP. The remittance of migrant workers is of far greater economic value than the FDI from foreign banks and corporations.

And yet, as Alam finds, the government of Bangladesh is cavalier towards the migrant. The High Commissioner Mohammed Hafiz seems a nice enough man. But he has essentially given up on his duties. “What can I do?” he asks.

The activists have it correctly. Parimala Narayanasamy of Coordination of Action Research on AID and Mobility (CARAM) tells Alam that “sending governments should come out strong to say that if any country needed workers, then they – the sending countries – should set the terms and conditions.” This is exactly what is not done, neither by the governments of Bangladesh nor of Ethiopia.

They treat the foreign bankers and corporate executives like heroes. They treat their own nationals that send in far greater amounts of money like criminals.

At Shahjalal International Airport in Dhaka, I charge my phone. Two men come and ask to use my charger. They are off to the Gulf. I don’t have a charger that fits their phone. A woman comes to me, hands me her boarding pass and asks me when her flight gets into Abu Dhabi. She is to be picked up by her employer. The boarding pass does not have the time of arrival. She looks in her bag for her ticket. There is so little there. One of the men asks her if she has a charger. She does not. They smile at each other. They have so much in common. They will find a way to help each other. It is the way of these workers. They have themselves and their families. Everyone sees them as an inconvenience.