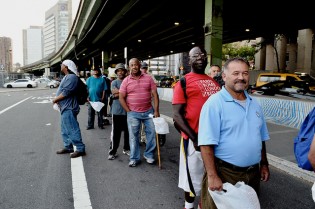 By Zafirah Mohamed Zein
Threatened with slaughter if they descend what is now known as the “Mountain of Death” and at risk of dying of dehydration if they stay, tens of thousands of Yezidis have been driven to peril by the Islamic State (also known as ISIL).

By Zafirah Mohamed Zein
In precarious environments all around the world, women are being seized into the throes of conflict and poverty. Where war is being waged, women are either caught in the crossfire or bear the brunt of exclusion and attacks on their family, livelihood and emotional wellbeing.

By Zafirah Mohamed Zein
Although global poverty is declining, human development growth across all regions is slowing down, according to the 2014 Human Development Report (HDR) launched Thursday by the U.N. Development Programme (UNDP).

CAR With the “Most Abandoned People,” Says Mia Farrow

By Zafirah Mohamed Zein
“I came away thinking that the people of the Central African Republic (CAR) were surely the most abandoned people on earth,” said Mia Farrow.