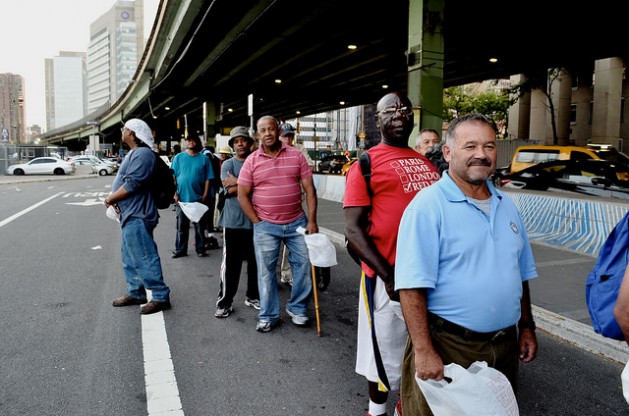 NEW YORK, Aug 25 2014 (IPS) - Joe sits on newspapers spread on the sidewalk by the entrance to midtown’s Grand Central Station. His head rests in his hands, only looking up when coins from passersby clink into his paper cup.

“A shelter is like a prison without guards,” he says, when asked why he was out on the street. “I’m done with them.”

“A few things happened after the war. The government just forgot about me. Not only just me but a lot of others too." -- Don, a Vietnam veteran

The 36-year-old says “people who just got out of jail” steal from others in the bathroom and violence is rampant, as shelter staff members turn a blind eye. Throughout the conversation, Joe holds tight to his backpack, making sure it stays close.

While accurate figures for New York’s unsheltered homeless are hard to come by, the thousands sleeping on the streets are in addition to the 53,615 people – a record-breaking figure not seen since the Great Depression – who enrolled in the city’s shelter system in January this year. Yankee Stadium would not be able to seat all of them.

The Callahan v. Carey consent decree of 1981 established the right to shelter in New York and put into place certain minimum standards for shelters. However, many are still plagued by overcrowding, deplorable sanitary conditions and poor infrastructure.

“While there is that right to shelter, many individuals, maybe because of bad experiences, choose not to go there and prefer to be on the streets,” said Gabriela Sandoval, a policy analyst at Coalition for the Homeless.

“Some shelters do feel very much like prison and many just don’t feel like going to that environment,” she told IPS.

Most shelters have sets of rules that include a smoking and alcohol ban, as well as a 10 p.m. curfew. Punitive policies such as sanctions, which were put in place by Mayor Rudolph Giuliani, can be used against those who engage in certain behaviours or if they repeatedly fail to meet with a case manager.

“There is a lot of stress in your life if you’re homeless. You have no place of your own and you are not at your 100 percent full capacity level,” said Sandoval. “Sometimes staff members in shelters don’t see it that way. They have a different perception of the problem and tend to believe that the homeless want to be homeless.”

Even for those who have secured a place in the shelter system, a way out of poverty is difficult and chronic homelessness haunts the lives of those in New York’s underclass. 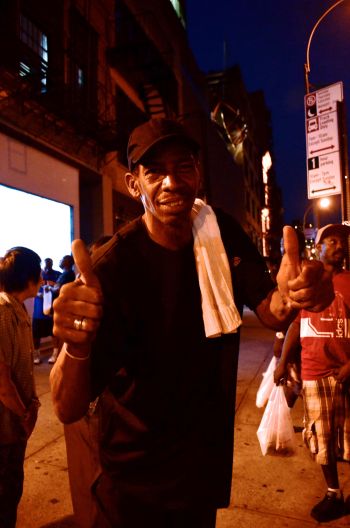 Melvin gets free food from the Coalition for the Homeless on Bowery and wants the world to know the good work they do to help men like him every day. Credit: Zafirah Mohamed Zein/IPS

Sandoval attributes the rise in homelessness to the lack of affordable housing and the high unemployment rate in the aftermath of the economic recession. Some families with one or two working parents still find themselves unable to afford rent in what is known as one of the greatest cities in the world.

Outside the Bryant Park subway stop, a man and his pregnant wife are slumped behind a cardboard sign similar to Joe’s, with urgent pleas – “need money, need food, need clothes.” The couple said they were staying in the city’s shelter system and had a roof over their heads every night, but had little for anything else.

Homelessness grew under the administration of Mayor Michael Bloomberg, when permanent housing assistance for homeless families was terminated and they had to rely on short-term “band-aid” policies.

The city’s current mayor, Bill de Blasio, has committed to the creation of 30,000 supportive units over the next 10 years. New York has also recently undertaken a plan to move families out of shelters and into their own apartments with two new rent subsidy programmes. Altogether, the administration’s plan will cost almost 140 million dollars.

For individuals on the street with mental or emotional problems, Mary, a volunteer with the Coalition’s Food Van Program, said, “Lots of times they’re mentally incompetent to even make their way to the services available. If they get in such a bad way, they get picked up, taken to the hospital and treated but they’re sent out as quickly as they can back out on the streets.”

Sandoval acknowledges a common problem regarding the assessment of homeless individuals, especially those with mental health issues. “It’s really hard to tell if someone has a mental health problem unless there is a psychological evaluation done.”

Due to the lack of resources, such evaluations are rarely carried out.

“A few things happened after the war. The government just forgot about me. Not only just me but a lot of others too, you’ll be surprised by how many stand in this line,” said Don, a Vietnam War veteran in line for the Coalition food van parked under the FDR Drive on Manhattan’s east side.

“We’re not all bums who do drugs and drink or whatever. A lot of people here got educations and everything.”

Joe agrees. He says he stays away from drugs and alcohol. The coins he collects go toward daily trips on the subway, or a night’s sleep on someone’s couch. He can make up to 80 dollars on a good day, and even more on Christmas.

He does his own laundry, he said, lifting his bright white shirt off his chest. He claims to be saving for the future and says he does not sit on the street when he can help it. Speaking with a confidence and tough hope born out of experience, Joe appears to have a system going.

Estranged from his mother upon his father’s death when he was 16, Joe had to work from a young age to support himself, mostly construction work. A fall down a flight of stairs led to medical problems, and he ended up on the streets. He does not keep in touch with his siblings, one of which is “in a bad state” and the other in prison.

“I’ve been in worse places in my life before, believe it or not. I’m just waiting for this disability to come through, so I can get a proper place. I’m halfway there, halfway there,” he said.

Homeless individuals like Joe and Don are the men of New York City’s margins, navigating their way through shelters and streets, increasingly less trusting of a city that has abandoned them in the shadows.

“I don’t think enough services are available for the homeless community,” said Jeffrey Collete, co-founder of New York City Homeless Advocates. “There is a lot not being done and it’s sad because this city is so rich, with such rich tourists.”

Caleb, another volunteer with the Coalition, says the issue of homelessness has never been a political priority.

“When it becomes a sanitary issue, then it becomes an issue. It’s a simple matter of them not having anything to do with elections. No politician ever won an election because he helped homeless people.”