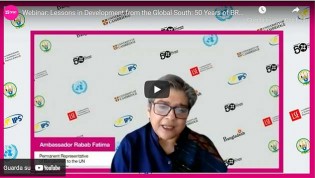 
Isobel Coleman was sworn in as Deputy Administrator for Policy and Programming at the United States Agency for International Development (USAID) in November 2021.


The way nature is valued in political and economic decisions is both a key driver of the global biodiversity crisis and a vital opportunity to address it, according to a four-year methodological assessment by 82 top scientists and experts from every region of the world.

By External Source
The United Nations global fund for education in emergencies and protracted crises, Education Cannot Wait (ECW), released a shocking new report today that indicates the number of crisis-impacted school-aged children requiring educational support has grown from an estimated 75 million in 2016 to 222 million today.


Catherine M. Russell became UNICEF’s eighth Executive Director on 1 February 2022. Ms. Russell brings to the role decades of experience in developing innovative policy that empowers underserved communities around the world, including high-impact programmes that protect women and girls, including in humanitarian crises. She has extensive experience building, elevating and managing diverse workforces and mobilizing resources and political support for a broad range of initiatives.

By External Source
Conflicts in Northern Ethiopia’s regions of Afar, Amhara and Tigray, have pushed children and adolescents out of school and are fueling humanitarian needs in the region. In response to this crisis, Education Cannot Wait (ECW) announced today a US$2 million First Emergency Response Grant that will reach more than 20,000 refugee and displaced, as well as host community children and adolescents. This brings ECW ongoing investments in Ethiopia to over $30 million.


ECW: Congratulations on your appointment by United Nations Secretary-General António Guterres as the Special Adviser for the Transforming Education Summit. What do you hope to achieve through the Summit and why is it so critical that the world comes together to address the global education crisis around this September’s UN General Assembly?

By Andrew Firmin
Economic crisis has provoked a great wave of protests in Sri Lanka. People are demanding the resignation of the president, blamed for high-handed and unaccountable decision making, exemplified by his introduction of an agricultural fertiliser ban in 2021 that has resulted in a food crisis. People don’t just want the president’s removal: they want a change in the political balance of power so that future presidents are subjected to proper checks and balances. Hope comes from the wide-reaching and diverse protest movement that has put aside past differences to demand change.

Politics in Pakistan: The Captain’s Crisis!

“O, Captain! My Captain! Our fearful trip is done,
The ship has weather’d every rack, the prize we sought is won,
The port is near, the bells I hear, the people all exulting,
While follow eyes the steady keel, the vessel grim and daring….”
Walt Whitman

By Iftekhar Ahmed Chowdhury
Pakistan’s impossibly debonair and incredibly urbane cricketing star turned politician, Imran Khan, is a man of a myriad parts. Where English is spoken and cricket is played, he remains a hero. Time was when leading his team in many a Test match he caused blood to rapidly pulsate through Pakistani veins. In a nation buffeted by the vicissitudes of misfortune and thirsting for pride, he had fulfilled his people’s dream by winning them the ultimate prize in cricket, the World Cup. But then he switched games and went into politics. The fates, with him for a while, eventually withdrew their favour. He gambled with a tactic that was no more than a political stunt. Alas it failed, and the Courts in his country refused him relief. But this essay is not so much about him. It about the Courts that finally caused his fall. It is also about the role the judicial organ of the State has played along the inscrutable path of Pakistan’s constitutional and political destiny.

By External Source
Expanding on Education Cannot Wait’s (ECW) US$5 million Ukraine First Emergency Response grant announced in March, ECW today announced a new, initial US$1.5 million allocation to support the education in emergencies response for the Ukraine refugee crisis in Moldova while on mission with strategic partners USAID, FCDO/UK and Theirworld. This new allocation brings ECW’s total Ukraine crisis education response to US$6.5 million to date. The new grant will be delivered in partnership with the Government of Moldova to ensure refugee children and youth can access safe and protective learning opportunities. Investments will also benefit children in the host communities. The development of the grant will be facilitated through the coordination mechanism established for the education response.
Next Page »
ADVERTISEMENT ADVERTISEMENT