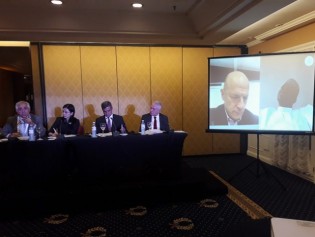 By Daniel Gutman
Is it possible for the financial sector of Latin America and the Caribbean not only to think about earning money but also to contribute to the 2030 Agenda for Sustainable Development? The answer was sought in Buenos Aires, Argentina, at a regional roundtable on sustainable finance, the United Nations Environment Finance Initiative.
ADVERTISEMENT ADVERTISEMENT