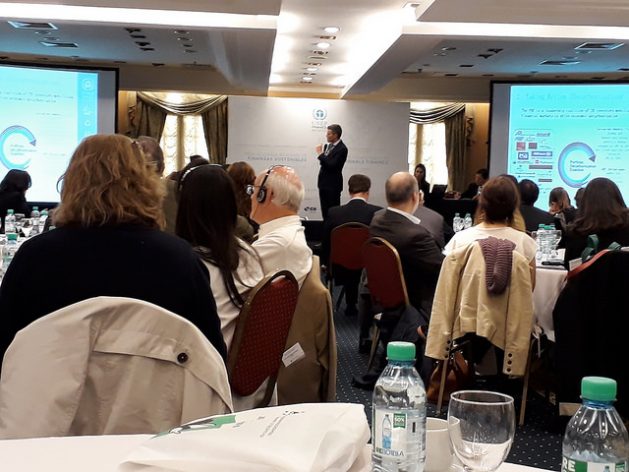 BUENOS AIRES, Sep 8 2017 (IPS) - Is it possible for the financial sector of Latin America and the Caribbean not only to think about earning money but also to contribute to the 2030 Agenda for Sustainable Development? The answer was sought in Buenos Aires, Argentina, at a regional roundtable on sustainable finance, the United Nations Environment Finance Initiative.

“How to mobilise sufficient funds is obviously one of the critical aspects of the agenda for sustainable development,” said Eric Usher, a Canadian economist with experience in the renewable energies sector and current director of the initiative, known as UNEP FI.

“Of course, profit maximisation is a tool for delivering economic development and it should be. But there’s a role for governments to play, to create the right framework and the enabling environment, to make sure that the private sector makes money doing the right things,” he told IPS, during the roundtable on Sept. 5-6, which brought together dozens of representatives of banks, investment funds and international bodies.

“I don’t think there is any discrepancy or problem with making money on sustainable development. The public and private sectors need to work together so we can deliver in a way that creates the most benefits,” said Usher.

UNEP FI is a global partnership between U.N. Environment and more than 200 financial entities – 129 banks, 58 insurance companies and 26 investment funds – from some 60 countries, created in the context of the 1992 Rio de Janeiro Earth Summit. The meeting in Buenos Aires meant a return, after 25 years, to the region where the initiative first emerged.

“If the risk assessment is comprehensive, it should not be purely financial and short-term. For example, when a bank carries out an analysis before investing in a renewable energy project, it should take into account the kind of energy mix the country is moving towards.” -- María Eugenia Di Paola

The Latin America and Caribbean round table will be followed by four other regional roundtables this year: North America (in New York), Europe (Geneva), Africa and the Middle East (Johannesburg) and Asia and the Pacific (Tokyo).

Financial bodies and business chambers from many countries explained in Buenos Aires the progress they have made in recent years with regard to the introduction of questions such as environmental and social risk or the calculation of carbon footprints in the assessment prior to granting loans, as well as their own energy efficiency goals or the reduction of paper consumption.

It became clear, nonetheless, that the certainties are still outweighed by the unanswered questions regarding the financial sector’s participation in the 2030 Agenda, which the U.N. member countries have been working towards since 2016, through the 17 Sustainable Development Goals (SDG).

“We are barely at the start of the journey and this is not easy,” admitted Mario Vasconcelos, director of institutional relations of the Brazilian Federation of Banks (Febraban), which represents 123 financial institutions, 29 of which, he explained, have committed to finance productive projects to contribute to reducing carbon emissions.

“There are many business opportunities in the transition towards a low-carbon economy, which has already begun,” Vasconcelos said with enthusiasm.

Forty financial institutions in the region have signed the UNEP Statement of Commitment by Financial Institutions (FI) on Sustainable Development. UNEP FI has been working mainly towards building expertise in the sector about how to identify social and environmental risks in investment projects, so that these can be considered along with the economic risks.

This is perhaps the most difficult task, as Beatriz Ocampo, manager of Sustainability of Grupo Bancolombia, the most important private bank in Colombia, acknowledged to some extent.

“If you tell bankers they have to finance projects that contribute towards the fight against climate change, they will not understand what you are talking about. That is why it is important to establish what sustainable finance means,” she said.

In this sense, the region still has a long way ahead.

In Argentina, for example, questions related to sustainable finance are not a priority for most banks, due to the fact that there is no involvement by the state, and the adoption of these criteria is completely voluntary.

This was the conclusion of a report carried out in 2016 by UNEP FI together with CAF – the Development Bank of Latin America – on the basis of a survey which found that only 39 per cent of Argentine banks have implemented social environmental management systems.

One of the most commented topics during the meeting in Buenos Aires was the speech by Javier González Fraga, president of the Banco de la Nación Argentina, the largest public financial entity in the country.

He was the first speaker in the meeting and was critical of the financial sector while he praised environmentalists, which took many by surprise.

“The financial logic of these days does not allow us to protect the environment. We must not let economists, and especially not financial experts, express their opinion about the planet we are going to leave to our grandchildren,” he said.

González Fraga is a centre-right economist with vast experience, who presided over Argentina’s Central Bank during the presidency of Carlos Menem (1989-1999) and was appointed by the current president Mauricio Macri as head of Argentina’s only national bank.

In dialogue with IPS, González Fraga, who has postgraduate degrees from Harvard and the London School of Economics, expressed a conviction that “we must go about finance a different way, especially public banks.”

“Many years of experience have shown me that the classical or neoliberal theory will in no way solve environmental problems. The government must lead the way and have institutions such as state banks head up the process of change in approach,” he said.

González Fraga also condemned the U.S. government’s decision to pull out of the Paris Agreement on climate change.

“We see on TV what happened in Texas with Hurricane Harvey and it is clear that there is no need to explain what the future might hold, because it is already happening today. Donald Trump can say many things, but the reality in the U.S. can’t be denied, and people on the streets are starting to play an increasingly important role in the environmental issue,” he said.

For María Eugenia Di Paola, coordinator of Environment for the U.N. Development Programme (UNDP) in Argentina, financial institutions in the region should not find it so difficult to add social and environmental criteria to economic factors, in risk assessment.

“If the risk assessment is comprehensive, it should not be purely financial and short-term. For example, when a bank carries out an analysis before investing in a renewable energy project, it should take into account the kind of energy mix the country is moving towards,” she told IPS.

“This way, the financial sector will acquire a perspective more attuned to the 2030 Agenda. And the climate catastrophes are already occurring, so that the concepts of medium and long term are very relative,” Di Paola said.