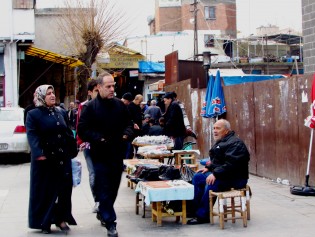 By Karlos Zurutuza
It was only seven in the morning when Mohamed Abdi spread out a rug a few metres away from an artillery crater, up in the Qandil mountains of northern Iraq. This Iraqi Kurd from Suleimaniyah, 260 kilometres northeast of Baghdad, was ready to celebrate the Newroz – the Kurdish and Persian New Year – along with his family.