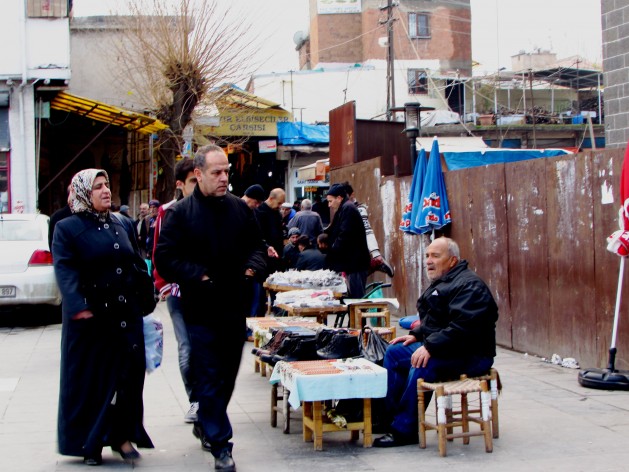 Open market in the southeastern Turkish city of Dyarbakir, capital of the Kurds in Turkey. The city has been a focal point for conflicts between the government and Kurdish movements. December 2014. Credit: Fabíola Ortiz /IPS

DIYARBAKIR, Turkey, Jan 29 2015 (IPS) - A rupture inside the movement for the creation of an independent state of Kurdistan has given new impetus to the voices of those condemning the use of weapons as the way to autonomy.

The 40 million Kurds represent the world’s largest ethnic group without a permanent nation state or rights guaranteed under a constitution.

“We are the only nationality with a great population without land,” Murat Aba, a member and one of the founders of the Kurdistan Freedom Party (PAK), told IPS. “We’ve been split since after the First World War and we’ve never been allowed to rule ourselves. We are not a minority, we’re a huge number of people and we defend the independence of the four Kurdish groups living in Iran, Iraq, Syria and Turkey.”

“The peace talks between the PKK and the [Turkish] government should take a different direction. They are being done in secrecy without any transparency at all. We are against the use of firearms in our struggle for independence” - Sabehattin Korkmaz Avukat, lawyer for human right causes involving Kurds.

PAK, which was formally launched towards the end of 2014, is the first legally recognised party in Turkey to include the word ‘Kurdistan’ in its name which, until recently, was forbidden for political parties in the country. According to its leader Mustafa Ozcelik, PAK will pursue independence for Kurds ”through political and legal means”.

This distinction is intended to differentiate it clearly from the Kurdistan Workers Party (PKK) – the armed group created in the 1970s to fight for self-determination for the Kurds in Turkey and considered illegal by the Turkish government. So far, the armed struggle for independence has killed over 40,000 people.

Today, around 20,000 PKK soldiers are being trained In the Qandil Mountains of northern Iraq, 1,000 kilometres from Diyarbakir, the capital of the Kurds in Turkey. Many of them are now fighting against the Islamic State (IS) in Syria and Iraq.

The financial resources to maintain PKK operations come illegally from Kurds living in Europe, Hatip Dicle of the Democratic Society Congress (DTK) admitted to IPS. The DTK is a political party which also includes members who are sympathetic to PKK ideology.

The Turkish government “does not allow us to collect donations by legal means,” Dicle continued. “There are over two million Kurds in Europe and all donations are sent secretly.” Dicle said that even it is a pro-democracy movement PKK does not give up the armed solution.

However, in recent years, the PKK has been involved in secret “peace talks” with the Turkish government. Through senior members of his cabinet, Turkish President Recep Tayyip Erdoğan has been negotiating with Abdullah Öcalan, the PKK leader in jail since 1999 on Imrali island in the Sea of Marmara.

The DTK gained strength when the peace process between Turkish authorities and  Öcalan began and, now, “we want this conflict to be over and we wish to achieve a common solution,” Dicle told IPS.

Nevertheless, the secrecy surrounding the peace talks with Öcalan and the PKK is being strongly criticised by those who call for an open process.

“The peace talks between PKK and government should take a different direction. They are being done in secrecy without any transparency at all. We are against the use of firearms in our struggle for independence”, said Sabehattin Korkmaz Avukat, a lawyer advocating for human right causes involving Kurds.

According to Avukat, deep-rooted reform of the Civil Constitution in Turkey is needed. “We want to follow the path of democracy and not violence. Our fight is totally addressed to achieving our own autonomy in a peaceful way. We wish to have our rights included in the Civil Constitution”, he argued.

For Mohammed Akar, the general secretary and founder of a new Kurd cultural entity called Komeleya Şêx Seîd, an organisation dedicated to cultural and educational activities for the Kurdish community and based in Diyarbakir, the road to autonomy in Turkey should not include armed violence.

“We don’t want to use violence to achieve our independence. It may even spoil our claim for democracy”, said Akar, the grandson of Şêx Seîd.  Also known as Sheikh Said,  Şêx Seîd was a former Kurdish sheikh of the Sunni order and leader of the Kurdish rebellion in 1925 during Mustafa Kemal Atatürk’s nationalist regime (1923-38).

Şêx Seîd’s name and image had been banned since then until recently, and this is the first time that a civil society entity has been authorised to use his name.

Famous Kurdish writer and political scientist Îbrahîm Guçlu also criticises the way in which the PKK is promoting its political view. He denounces drug trafficking, forced recruitment and coercion of young Kurds by the outlawed group.

“The PKK is an illegal formation whose leader is in jail and tries to manage his entire community from inside prison. We are different and we promote open discussion within society”, says Guçlu.