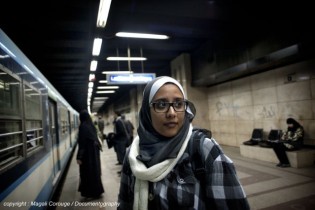 By Pierre Klochendler
With a subtle blend of colour and shadow, 20-year-old Sumoud Farraj prepares for a photo shoot. Next month, along with three other young Arab women, she'll appear in a designer miniskirt on the cover of Lilac, an Arabic-language women's magazine.
ADVERTISEMENT ADVERTISEMENT