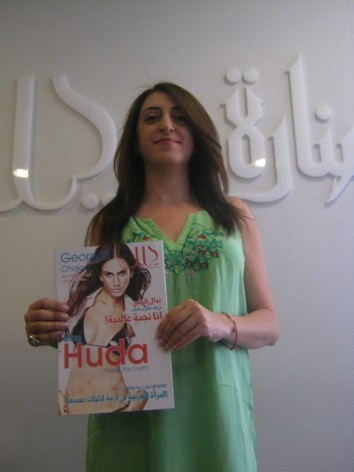 NAZARETH, Northern Israel, May 17 2013 (IPS) - With a subtle blend of colour and shadow, 20-year-old Sumoud Farraj prepares for a photo shoot. Next month, along with three other young Arab women, she’ll appear in a designer miniskirt on the cover of Lilac, an Arabic-language women’s magazine.

Lilac‘s editor-in-chief, Yara Mashour, is in the business of breaking taboos and stereotypes with beauty and fashion. “Lilac isn’t just a regular fashion magazine; it’s a magazine with a cause,” she stresses.

The “cause” is to try to change how Arab women see themselves, how Arab men see them, and how Jewish Israelis see their fellow citizens of Palestinian descent (one in five Israelis is Arab).

“Some people reject me because of my modelling ambitions,” says Farraj. “I can live with rejection. I am who I am, and I’ll move forward to be known – not just in Israel, but around the world.”

“Our predicament as Arab women demands a mini-revolution – to help ourselves attain freedom, mental and social, and realise ourselves, because we often need our husband’s, parents’, and society’s permission to do something daring.”

In 2011, Mashour decided to publish a cover picture of Huda Naqash, a Nazarene model crowned Miss Earth, in a bikini swimsuit. It was the first time ever that an Arab woman posed for an Arab magazine in such an outfit.

“Miss Huda rocks this earth!” read the caption. Thanks to the Internet, the tremor was felt throughout the Arab world, arousing a passionate virtual debate with over 70,000 mostly critical posts on the Saudi Arabia-owned Al-Arabiya website.

The suggestive photo was meant to illustrate engrained misconceptions and stereotyping of Arab society in general, Mashour points out. “There was no earthquake,” she adds. “Naqash didn’t get killed. No one threatened her. More than a model in bikini, the picture showed that Arab societies are gradually becoming more liberal in accepting changes.”

“I’m confident in my readers,” adds Mashour. “They mustn’t agree with me – you don’t like Lilac, don’t buy it – but we must debate in a democratic manner.”

Unperturbed by what she calls “this ridiculous media buzz”, she followed up last fall with the same model posing in sexy lingerie.

On Mashour’s desk sit copies of Lilac‘s ancestors from the 1970s, with models in poses more indolent than Naqash’s. “We went through many changes,” she says.

She evokes the Egyptian cinema’s golden era – its suggestive scenes and passionate kisses – and the ensuing conservative reaction. “Now we’re trying to revisit that period of freedom.”

"We're trying to revisit that period of freedom."
-- Yara Mashour

Lilac is the hook at the end of “The Fishing Rod”, or As-Sinara. Founded in 1983 by Mashour’s father, Lutfi, As-Sinara was the first independent Arabic-language weekly published in Israel.

Following Lutfi Mashour’s death in 2007, the three women in his life inherited his media venture. Yara became Lilac‘s editor, her sister Varia took over the advertising agency, and their mother Vida replaced her late husband as senior editor.

Common wisdom had it that with women at the helm, the newspaper would soon write its own eulogy. Yet As-Sinara remains Israel’s most widely circulated Arabic-language weekly and only newspaper managed by women.

“Women are more open and courageous than men,” quips Varia Mashour. “The male staff are scared of changes. We try things until things work out.”

Female innovation – more than empowerment – is what drives Yara Mashour. To innovate, she says, is to break the encirclement of her own existential isolation as a woman in a mainly conservative community, as a Christian in a mainly Muslim society, as a Palestinian in a mainly Jewish state, and as an Israeli in a mainly Arab Middle East.

“We’re on our own,” she confides. “We’re politically uncertain of our place. We want Israel and the world to see us and understand us, to accept us as equal in terms of laws, society and economy.”

Her father would say, “We say we’re first Palestinians; second – Arabs; third – Israelis. But in reality, we behave first like Israelis; then like Arabs; and only then like Palestinians. We’re Israeli – the way we think; react; speak. In essence, we’re all the same, Jews, Arabs. They, the Jews, are the other part of us.”

“I’m a Palestinian,” stresses Mashour. “I’m an Arab; I’m a woman; I’m an Israeli. And I’m trying to make people who’re part of this definition accept me, because I’ve accepted them.”

“The one good thing is that Jews and Arabs who live together influence each other,” Mashour adds on a more optimistic note, showing the current cover of 19-year old Lina Makhoul, an Arab woman from the mixed Arab-Jewish town of Acre who just won Israel’s version of “The Voice”.

For Lilac‘s next issue, business-like Mashour has a more traditional cover of a model dressed in a wedding gown.

“In our society, marriage is still the most important ‘job’. We bring to light any woman who wants to achieve a career. Become economically independent, then get married and have children,” she urges, conceding that this goal has not yet been reached. “But we’ve opened an expanding fashion and modelling industry.”

“My next project is to find a Palestinian model from Palestine to participate in international pageants, and to wear a bikini – if that’s what’s required,” but Mashour knows that this task will not be easy.