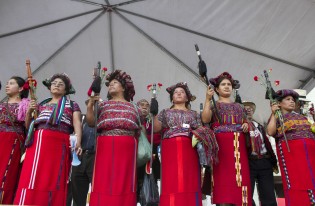 By Erika Guevara-Rosas
Chills ran down Tomás Gómez Membreño’s spine when he first heard about the brutal murder of his renowned friend and ally, the Honduran Indigenous leader Berta Cáceres, six months ago this week.

By Jeff Conant
The 2015 Goldman Environmental Prize for Central and South America has been awarded to Berta Cáceres, an indigenous Honduran woman who co-founded the Council of Popular and Indigenous Organizations of Honduras, known as COPINH.
ADVERTISEMENT ADVERTISEMENT