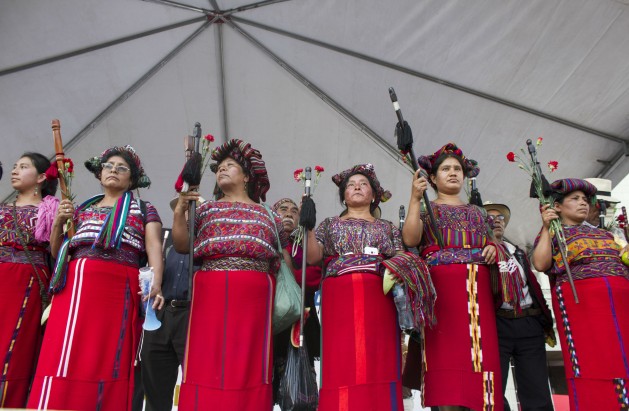 Indigenous women during the March for the Water in Ciudad de Guatemala, Guatemala in April, 2016. Credit: Amnesty International / Anaïs Taracena.

LONDON, Sep 1 2016 (IPS) - Chills ran down Tomás Gómez Membreño’s spine when he first heard about the brutal murder of his renowned friend and ally, the Honduran Indigenous leader Berta Cáceres, six months ago this week.

A fellow environmental activist and second in command at the Popular and Indigenous Organizations of Honduras (COPINH), Tomás feared he would be next.

Berta’s work was widely and globally acclaimed and had earned her international awards – if someone could violate the sanctuary of her home and shoot her dead, it was too frightening to contemplate what could happen to any of the country’s lesser-known human rights defenders.

Tomás also knew the hopes to have a proper investigation and to ensure the crimes against human rights defenders would not be repeated again were slim, in a country where authorities rarely condone attacks on activists.

Without land to grow food or clean water to drink, entire communities will simply be erased without a trace.

Tragically, he has a point.

Six months after two armed men walked into Berta’s home one evening and murdered her in cold blood, Honduras has become a no-go zone for anybody daring to protect natural resources such as land and water from powerful economic interests.

The numbers say it all.

According to a recent survey by Global Witness, Honduras and neighbouring Guatemala have the two highest rates of murders of environmental activists per capita.

An astounding 65% (122 out of 185) of the murders of human rights defenders working on issues related to land, territory or the environment registered across the world in 2015 were from Latin America. Eight took place in Honduras and 10 in Guatemala alone.

Berta’s killing marked a turning point for what was already a scandalous situation. But her tragic end was hardly surprising; it was a tragedy waiting to happen.

Months before her murder, she had reported a number of serious threats related to her outspoken opposition of the construction of the Agua Zarca dam in the community of Río Blanco, in north-western Honduras.

The local Lenca Indigenous community complains that they were not properly consulted over a plan that would threaten the flow of the Gualcarque River, which is sacred to them and provides them with food and drinking water. COPINH says that if built, it would force the community to relocate as life in the area would become virtually impossible.

But in resource-rich Honduras and Guatemala, it can be a deadly business to dare to defend natural resources that are highly valued in global commodity markets.

Both Central American countries have become ever-more attractive to powerful extractive industries, partly due to increasingly lax laws governing what companies can and cannot do. Meanwhile local communities are continuously squeezed out of the lands on which their survival depends.

The toxic cocktail of threats, bogus charges, smear campaigns, attacks, killings and crumbling judicial systems incapable of delivering justice has made the legitimate business of defending basic human rights a nearly impossible one.

Crimes against activists are rarely properly investigated, which perpetuate further violence. The authorities often blame their country’s weak institutions for the shocking injustice, but conveniently fail to ignore the fact that the absolute lack of political will to protect and support these activists is often what puts them in mortal danger in the first place.

After a great deal of international pressure, the Honduran government initiated an investigation into Berta’s murder and arrested five individuals – but the process is still marred with question marks over its fairness and impartiality. Meanwhile, members of COPINH and Berta’s lawyers continue to be threatened and harassed.

Tomás fears for what can happen to those linked to Berta. Other activists are so afraid they do not even dare to speak their names in public or discuss the threats they routinely face for protecting basic human rights.

But they say stopping their work is not an option. They are the last line of defence – no-one else will defend their communities and rights.

A country’s natural resources – as well as the people who bravely protect them – are among its most precious assets. This is not just for financial considerations. Without land to grow food or clean water to drink, entire communities will simply be erased without a trace.

The solutions to this profound crisis are not simple, but they cannot be ignored.

Investing time and resources in a much-needed overhaul of the Honduran and Guatemalan justice systems to ensure effective investigations into these crimes and putting in place proper protection for those at risk would go a long way to prevent the countries from losing more brave activists like Berta.

There is no time to waste.