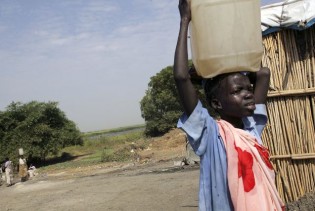 By Esmee Russell
In September, the United Nations will agree on new Sustainable Development Goals (SDGs) which will set development priorities for the next 15 years. The draft goals that have been developed are ambitious – they seek to end poverty and ensure no one is left behind.

By Thalif Deen
A U.N. working group mandated to formulate a set of Sustainable Development Goals (SDGs) for the post-2015 development agenda is being accused of bypassing water and sanitation as a basic human right: a right long affirmed in a General Assembly resolution adopted back in July 2010.

By Thalif Deen
Just 17 years from now, nearly half the global population could be facing water scarcity, with demand outstripping supply by 40 percent.
ADVERTISEMENT ADVERTISEMENT