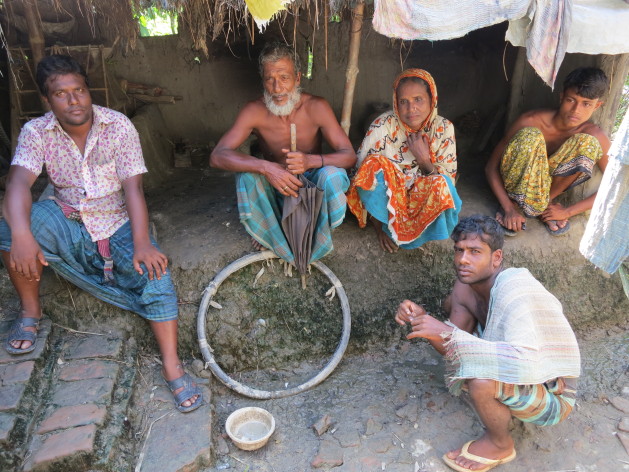 KHULNA, Bangladesh, Oct 25 2013 (IPS) - It has been four years since Cyclone Aila struck Bangladesh, triggering floods and widespread destruction. But the villagers of Koira subdistrict, among the worst affected of the 11 districts hit by the cyclone, are yet to recover from its impact.

The Jaman family was among the 41,043 families in Koira affected by Aila. Like most of their neighbours, they remained homeless for eight months, surviving on supplies from humanitarian organisations.

Some 23,820 houses were totally damaged in Koira. When the waters receded, the government gave them 20,000 taka (260 dollars) each to build a new house.

“We experience all natural disasters except perhaps a volcanic eruption: cyclones, floods, droughts, even earthquakes."

The Jamans used the money to build three cottages of clay, wood and corrugated sheets. But the family has no illusions; they know the next cyclone, which will hit them sooner or later from the Bay of Bengal 20 km away, will blow their new dwellings away again. Only the brick houses of the rich will survive.

But that is not their immediate concern. More worrying is the lack of a stable income. The Jamans are among the 40 percent of Bangladesh’s 155 million people who live below the poverty line. Before, it was a hand-to-mouth existence, but they never went hungry. Koira being an agricultural region, people could make a living off the land; the landless were employed by the farmers. In times of crisis, the poor could count on help from their more affluent neighbours.

Aila changed all that. Not only were 502 acres of crops destroyed in Koira, according to the damage summary by the local UNO office, but the cyclone left the fields waterlogged for three years. Now, since the water has receded, the soil has become salinated, allowing nothing to grow.

The newly pauperised rich therefore are no longer willing to share with their neighbours. Nor do they employ them in their barren fields any more.

“Before Aila, I had a garden here in my yard, so thick that the sunlight could not penetrate,” Shafiqul Islam tells IPS. The garden wilted because of the cyclone and the salinity.

Islam is the local representative of the ruling Awami League and “rich” by local standards, because he owns a brick house. But there is nothing remarkable about his three huts, covered with rusty metal and cane.

Among those who left are the three brothers of his neighbour, Robiul Islam, who stayed behind in the village with his mother and five-year-old son.

Robiul Islam drives a rented rickshaw, earning 80 taka a day (one dollar). His ambition? To earn 200 taka (2.5 dollars) a day. That is how much a five kilo bag of rice costs, which the family consumes in two days.

Besides, 200 taka is what Robiul’s brothers, all rickshaw pullers too, earn in the city. After the cyclone, they moved to Khulna, a three-hour drive away.

IPS visited a few refugees from Koira there. They live in the suburbs, in huts like the ones they have left behind, each accommodating four people. The rent is 200 taka per month.

Most men drive rickshaws and earn enough to be able to send money back home. One of them, Abdullah, tells IPS he sends 1,500-2,000 taka every month to his parents in Koira.

Hafeeza, on the other hand, is the poor among the poor. She cooks for the rickshaw pullers, earning 200 taka like them – but in a month. She says it is enough for her and her seven-year-old son. “At least, I do not have to pay for accommodation or food,” she tells IPS.

Back in Koira, the villagers say they do not know about climate change, never mind that Bangladesh ranks first in the world in terms of vulnerability to the impacts of climate change, according to German Watch’s Global Climate Risk Index.

“We experience all natural disasters except perhaps a volcanic eruption: cyclones, floods, droughts, even earthquakes,” says M.D. Shamsudoha, head of the Centre for Participatory Research and Development, a Dhaka-based NGO.

“After each natural disaster, 50,000-60,000 people migrate to cities, but the perpetual migration is not included in the statistics,” Shamsudoha tells IPS.

Experts expect about 250 million climate refugees globally by 2050. Of these, 20-30 million will be from Bangladesh.

Politicians and environmental experts associated with the government claim they are well-prepared to fight the effects of climate change. The country, they stress, was the first among the least developed countries to adopt a national strategy on climate change in 2009.

But local NGOs are sceptical. The government, they say, is good at formulating policies, but not at implementing them.

According to Shamsudoha, the state funds mostly large-scale projects, like the construction of coastal embankments and shelters or reforestation, while priority should be given to local development and adaptation. There are enough such programmes in risk areas, they say, but they do not address the scale of the problem.

Among the inventions tested by some NGOs and U.N. agencies are ‘disaster-resistant villages’, ‘floating solar-powered schools’ and “multi-tasked flood shelters’.

Bangladeshi scientists have also developed a variety of rice resistant to moderate salinity. But according to forecasts, cereal production in Bangladesh will fall by 32 percent by 2050. And the population of the country will grow by 130 million people.

Many farmers, instead of waiting for the saltwater to leave their fields, have taken to lucrative shrimp farming. The poor, however, lack the necessary capital for investment. Besides, shrimp farming spells another disaster for them: saltwater from the shrimp ponds seeps into the adjacent fields.

Shrimp also does not contribute to food security in the primarily rice-and-dal (lentil pulp) country. Yet, more and more farmers are selling their paddy fields to shrimp or mango cultivators – and leaving for the cities. They do not have any other option.