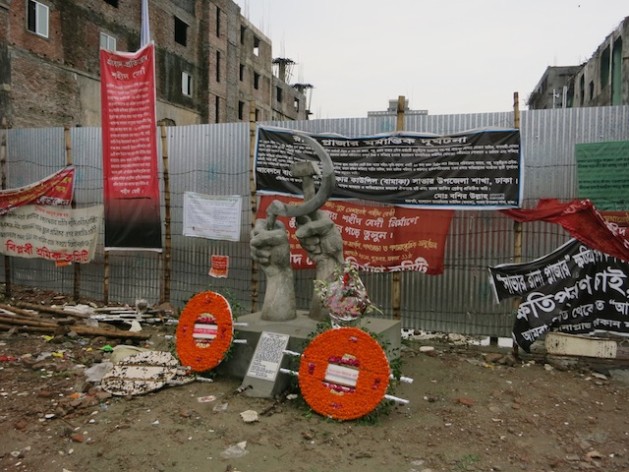 A memorial set up by the Communist Party of Bangladesh at the Rana Plaza factory in Dhaka where 1,133 workers died in April. Credit: Robert Stefanicki/IPS

DHAKA, Oct 2 2013 (IPS) - On the industrial outskirts of Dhaka, which is dotted with big and small clothes factories, thousands of workers took to the streets demanding a minimum wage rise.

Last week, protestors blocked roads, set factories on fire and clashed with police, who responded with rubber bullets and tear gas. Some 200 apparel plants – which make clothing for some of the world’s top retailers such as H&M and Carrefour – had to remain closed for a week.

The last time the government raised the minimum wage for the garments sector was in 2010. Now the workers are demanding an increase from 3,000 taka (38 dollars) to 8,114 taka (100 dollars). That is more or less the price that a pair of brand name jeans made in Bangladesh sell for after it reaches the shopping mall shelf in Warsaw or Berlin.

“Western consumers are partly responsible for the low level of wages in Bangladesh.” -- Reaz bin Mahmood, vice-president of the Bangladesh Garment Manufacturers and Exporters Association

The employers agreed a 20 percent hike, increasing salaries to 3,600 taka or about 46 dollars. But most commentators considered the increase a mockery and this offer led to riots.

In Bangladesh the minimum wage is fixed for each sector separately. The differences are substantial: transport workers or shop attendants get twice as much as the average wage for three million Bangladeshi garment makers.

The latter are at the bottom not just nationally, but globally. According to a study by the Japan External Trade Organisation released in December, only in Myanmar do garment workers earn less.

In neighbouring India their wages (in dollars) are twice as high as in Bangladesh, in China five times as high.

The minimum wage is theoretical, everyone takes overtime. IPS interviewed some women working as sewing machine operators who positioned their monthly earnings at 8,000 to 9,000 taka (about 102 to 115 dollars). Usually their workday stretches over 11 to 12 hours.

But raising the bottom threshold is important, because this means an increase for everyone.

According to trade union leader Masood Rana, the wage demands are partly a result of a growing awareness among the workers. After the hype over the collapse of the Rana Plaza factory building in April that took the lives of 1,133 workers, workers began to realise how much Western consumers pay for clothes made by their hands.

But why were the demonstrations so violent? “This is because the protests are spontaneous, there is no leader,” Rana told IPS.

Reaz bin Mahmood, vice-president of the Bangladesh Garment Manufacturers and Exporters Association (BGMEA) – and a factory owner himself – presents a different theory: protests are the work of political provocateurs. He did not explain whom he meant.

“This problem cannot be settled on the streets,” Mahmood told IPS. “There is a government panel working on new minimum wage level, expected to announce the results in November. But I’m afraid that this may not happen if the protests continue.”

Various payment models have been proposed. “We have carried out an economic analysis of the garment worker’s cost of living, with the assumption that his or her pay should cover the consumption of their family,” Dr. Khondaker Moazzem, additional research director at the Centre for Policy Dialogue (CDP) in Dhaka, told IPS. “And we came out with three options.”

The first is the poverty line that makes the pay 6,444 taka (80 dollars). CDP rejected this variant as unacceptable.

The second option was based on the “aspirational level”, which provides that the worker eats well and enjoys life, in which case the monthly wage should be 17,800 taka (220 dollars). This too was rejected, because the minimum wage cannot exceed the average salary in the country.

The third option, based on the current expenditure level, was worked out at 8,200 taka – which is exactly what the workers are demanding.

“After we sent this recommendation to the government, I received numerous calls from manufacturers,” smiled Moazzem. “They said they were ready to give me some factories and let me try to make a profit with such exorbitant salaries.”

“Costs of production increase every year by 13 percent,” said Mahmood of BGMEA. “Bangladesh has to import cotton, India has its own. The currencies of India, Indonesia and Turkey are losing their value, the Bangladeshi taka remains strong, so we lose competitiveness.

“The government does not support us: there are frequent power outages, and travel from Dhaka to Chittagong port should take six hours instead of 26.”

To this list Moazzem of CDP adds the high cost of loans, difficulties with buying land for investment, and political instability.

But the apparel plants may not lose competitiveness as easily as the entrepreneurs lament. The prices of clothes are down and production costs are up, but this is compensated by increased efficiency.

“I recognise that my workers should get paid more, but for that the retailers must pay me more,” Mahmood said, explaining that the price is decisive in gaining contracts. “Western consumers are partly responsible for the low level of wages in Bangladesh.”

According to Moazzem, retailers make the most from clothes made in Bangladesh: 55 to 65 percent. About 25 percent is the cost of material. The rest, about 15 percent, is divided evenly between workers and employers.

It is not certain that the workers will get what they want. Shipping minister Shahjahan Khan has openly supported their demands, but the government is believed to be on the side of manufacturers. Nobody wants to harm the goose that lays the golden eggs – garment production provides Bangladesh with 80 percent of its export earnings, 22 billion dollars annually.

What is more, 30 percent of MPs in Bangladesh are businessmen, mostly from the apparel industry. They sponsor both major parties.

After talks with the leaders of more than 40 trade unions, Bangladeshi garment factory owners have promised to raise wages as soon as a government panel sets a figure, without bargaining.

Most commentators predict that the new minimum wage to be announced soon will be set on a “compromise” level.