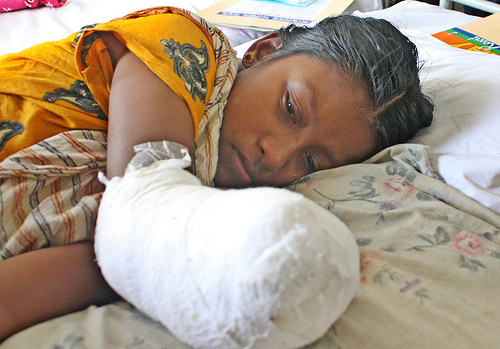 DOHA, May 23 2013 - Those responsible for the Bangladesh building collapse that killed more than 1,000 garment workers should be given life in prison, a government-appointed committee has said.

The investigating committee, appointed by Bangladesh’s interior ministry, recommended life in prison for the owner of the five factories based in the building on the outskirts of Dhaka.

The Apr. 24 collapse of the Rana Plaza building, the deadliest garment industry accident in history, highlighted the hazardous working conditions in Bangladesh’s 20 billion dollar garment industry and the lack of safety for millions of workers, who earn as little as 38 dollars a month.

The committee found that the ground on which the Rana Plaza was built was unfit for a multi-storey building and the construction itself was “extremely poor quality”.

“A portion of the building was constructed on land which had been a body of water before and was filled with rubbish.” Khandaker Mainuddin Ahmed, the committee head, told the Association Press news agency on Thursday.

Ahmed said Sohel Rana, owner of Rana Plaza was “the main culprit, and because of him 1,127 people have died.”

The report found that Rana ignored construction codes by converting the originally designed six-storey building meant for a shopping mall and commercial space into an eight-storey factory complex where over 3,000 labourers toiled.

Khandaker said Rana, and the factory owners, four of whom have been arrested, forced employees to go to work on Apr. 24 despite cracks which appeared in the building the day before.

“They threatened the workers that they would be fired and that their salaries would be cut if they refused to go to work.”

The committee also said the owners used generators in upper floors, defying building regulations. Combined with other industrial machinery the weight of the generators triggered the collapse.

A U.S. delegation is to arrive on Sunday led by Wendy Sherman, the State Department’s under secretary for political affairs. They will meet officials from the Bangladeshi government.

If the proposals are accepted, “it will become the largest ‘better work’ programme in history,” Mozena said.

The Bangladeshi government has already pledged to tighten factory safety inspections and make it easier for workers to form unions and set up a panel to raise wages for the three million garment workers.

Mozena said there were still “some outstanding issues” to be addressed, without elaborating.

Poor wages and repeated fatal accidents have led to a string of protests in the main garment-manufacturing hubs, halting shipments and forcing some retailers to divert orders to other countries.

More than 2,500 people were rescued after the disaster and the committee has urged the government to provide them with free medical treatment.