WASHINGTON, May 15 2013 (IPS) - Labour groups here are stepping up pressure on U.S. firms to sign a binding building safety agreement for Bangladeshi factories after 10 major European garment companies signed onto the landmark agreement.

H&M, a major European apparel chain, signed the agreement Monday, and Benetton, which was under fire from activists after their clothing was found in the ruins of the Rana Plaza factory which collapsed in late April, signed on Tuesday. 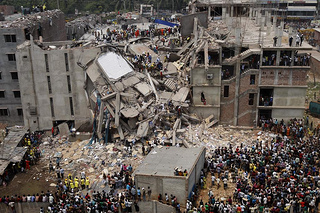 The nearly month-long search for victims in the wake of the Rana Plaza collapse ended Monday, after the death toll had reached 1,127.

“H&M’s decision to sign the accord is crucial,” Scott Nova, executive director of the Worker Rights Consortium (WRC), an independent labour rights watchdog group based in Washington, said in a press release.

“They are the single largest producer of apparel in Bangladesh, ahead even of Walmart. This accord now has tremendous momentum.”

Other European companies that signed the accord, known as the Bangladesh Building and Fire Safety Agreement, included Inditex, C&A, Primark and Tesco. By Tuesday evening, the only U.S. company to agree to the accord was PVH, the parent company of Tommy Hilfiger and Calvin Klein, which signed last year.

According to the International Labor Rights Forum (ILRF), an advocacy organisation, the new agreement covers all major areas needed to ensure its effectiveness: “independent safety inspections with public reports, mandatory factory building renovations, the obligation by brands and retailers to underwrite the cost of repairs, and a vital role for workers and their unions”.

The pact also calls for participating companies to pay up to 500,000 dollars a year toward building maintenance and safety in Bangladeshi factories, to bring them up to a specified standard. According to Liana Foxvog, ILRF communications director, the associated costs would translate into about ten cents per garment.

The agreement between several major European companies has also been significant in that it now focuses a spotlight on the relative inaction of their U.S. counterparts – and narrows and intensifies the pressure from labour groups on U.S. companies to sign the pact.

“The fact of European brands signing on is very important for the Bangladesh garment industry,” Foxvog told IPS. “It’s time for U.S. companies to sign on as well.”

Labour groups are particularly focused on Walmart and Gap, two of the largest and most influential companies that source from factories in Bangladesh. Foxvog said that “If Gap changes its mind, we expect that more U.S. companies will sign on.”

Gap, which was close to signing the agreement last year before starting its own non-binding, voluntary agreement with factories in Bangladesh in October 2012, said Monday that the company was concerned about possible “legal liability” issues that could arise.

The company said Tuesday that it was “six sentences away” from signing the accord and would accept if those proposed sentences, which lessen its liability concerns, were accepted.

But critics say such arguments have little substance behind them.

“Gap is saying it doesn’t want to be held accountable for the working conditions (in the factories) and other commitments of the safety agreement,” she said.

Still, labour rights groups are growing increasingly optimistic, as companies seem to be facing increasing pressure to conform to multi-stakeholder agreements, and the Bangladeshi government has shown signs of committing to stronger labour standards.

On Monday, Bangladesh’s cabinet lifted restrictions on forming unions, reversing a 2006 law that required employees to obtain permission from an employer before organising.

And the previous day, the government set up a new minimum wage board that will include factory owners and workers, and government officials, and will recommend pay raises. However, the decision to implement these new standards will still need to be approved by the cabinet.

But for broader change, advocates argue that the active participation of multinational companies is key to bringing about permanent change in the Bangladeshi garment industry. Proponents are now hoping that the announcement by the 10 European companies – with more, perhaps, to come – could now create a transatlantic ripple effect.

“This is a really tremendous advance to have … global brands and retailers make a binding commitment to worker safety,” Judy Gearhart, executive director of the ILRF, said in a statement. “Now we need major U.S. brands and retailers such as Walmart, Gap, and JC Penney to join in the same agreement.”

Walmart has said its own safety plan meets or exceeds the building and fire safety code’s standards, but added that it would continue to discuss the plan.

Howard Riefs, spokesman for Sears, also a large producer in Bangladesh, said late Tuesday that while the company is still in discussions over the plan, it is not yet ready to sign on. JCPenney and The Children’s Place are also reportedly still evaluating the plan.

Last week, the ILRF and United Students against Sweatshops, an advocacy group, launched a new website, designed to ramp up pressure on Gap to sign the Bangladesh Fire and Building Safety Agreement.

“I find it hard to believe that Gap is irresponsible enough to continue on this course of action (of avoidance) any longer,” Nova told IPS.