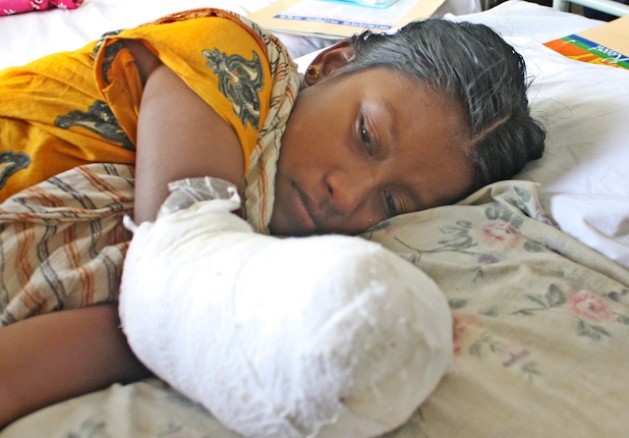 Many of the workers who survived the factory collapse in Bangladesh have lost their limbs. Credit: Naimul Haq/IPS

DHAKA, May 20 2013 (IPS) - “It was dark and hot with choking dust all around. The air was filled with the smell of decomposing corpses,” recalled Nasima, a 24-year-old factory worker who spent four days buried under the rubble of an eight-storey building that collapsed in a suburb of Bangladesh’s capital Dhaka last month.

The young woman recounted the terror that she and four fellow female workers experienced as they lay beneath glass and concrete, just “inches” from death. Rescue teams found them sandwiched between the fifth and sixth floors of the massive Rana Plaza that had housed five garment factories.

“I will resort to begging if I have to, but I’m not working in a garments factory ever again." - Mariam, a 25-year-old survivor of the Rana Plaza tragedy.
Nasima told IPS she was “too scared” to remember all the details of those 96 hours. “I saw my colleagues die, just a few yards from me, one after the other.” Her only indication that they were dead was when she could no longer hear their voices calling out to her in the dark.

Nasima had joined Ether Garments, one of the many companies housed in Rana Plaza, only 20 days before the tragedy, Bangladesh’s worst industrial accident, which killed 1,127 workers according to the latest count.

While families searched desperately for loved ones in the ruins in the town of Savar, 25 kilometres from Dhaka, reports of negligence and lack of workplace safety emerged. It became clear that factory owners had been warned of a possible collapse of the building that was only legally permitted to house five floors.

As survivors came to and began to speak out, they reported that management personnel had ignored recommendations by engineers to keep factories shut on Apr. 24, going so far as to threaten workers with dismissal if they failed to report for duty as usual.

The revelation sparked international outrage and shed light on the inner workings of Bangladesh’s garments sector, the country’s largest foreign exchange earner, which brings in about 20 billion dollars a year.

Multinational retailers like H&M, Gap, Walmart and Primark, which have outsourced most of their production to Bangladesh to take advantage of cheap, mostly female, labour, came under fire for failing to enforce safety standards.

While these accusations are not new, rights groups hope this latest tragedy will jolt the industry into implementing better labour laws and adhering to safety standards.

They say the roughly 2,500 rescued workers, many of them women, are living proof that Bangladesh must not repeat the mistakes that led to the Savar tragedy.

Speaking to IPS from her hospital bed in the National Institute of Traumatology & Orthopaedic Rehabilitation (NITOR), 19-year-old Shapla, whose left arm was so badly injured that it had to be amputated on the site, recalled surviving for several hours squeezed between the second and third stories of the building, “with blood and corpses all around.”

Shapla’s husband, Mehedul, who worked as a sewing operator on the same floor, told IPS he survived by sheer luck, as he had been at the back of building at the moment the massive structure pitched forward.

Most of those working at the front of the building were crushed under the full weight of falling concrete slabs and crumbling walls.

Others, like 21-year-old Razia, say it is too painful to go on. “Someone give me poison. I want to die,” she cried out in the hospital ward where she and 121 other survivors are being treated free of cost.

She told IPS she and a few other girls had been “gossiping about the previous day’s decision to keep the factory open,” despite large cracks appearing on the pillars the day before. The next minute she heard what sounded like a huge explosion; then everything went dark.

For the next 14 hours, she struggled to breathe through the thick dust that hung around her.

In the hospital bed beside her lies Shamsul Alam, a 28-year-old quality inspector whose doctors say his spinal injuries are “too dangerous to operate on” and may end up being fatal.

Though he has not been informed of their bleak diagnosis, he told IPS he now “knows what its like to be in a coffin”, explaining the helplessness of being trapped and listening to people die around you.

Meanwhile, the trauma has wiped some survivors’ memories clean. An operator named Runu, unable to recall a single thing about that fateful day, stares vacantly into space while her sister tells IPS that Runu spent a full two days under the rubble before finally seeing daylight.

Those who can remember have vowed neither to forget nor to step foot into a factory again. “I will resort to begging if I have to, but I’m not working in a garments factory ever again,” 25-year-old Mariam, whose legs and arms were pulverised by concrete and iron rods, told IPS.

“My freedom means I was born again,” added a former worker named Shakhina. “I will not make the mistake of stepping back into that death trap.”

Meanwhile, major players in the industry are finally taking heed.

A.K.M Salim Osman, president of the Bangladesh Knitwear Manufacturers and Exporters Association (BKMEA), one of the industry’s apex bodies, told IPS that the incident in April was a “wake up call for us who depend on the labourers for business.”

“If we continue to ignore strict ethical standards (around) safety issues we will fail again,” he warned.

Osman said the recently ratified Bangladesh Building and Fire Safety Agreement is a step in the right direction. Under the accord, a tripartite committee comprised of company representatives, trade unions and a neutral inspector chosen by the International Labour Organisation (ILO) will monitor progress in implementation of safety standards as laid out in previous protocols such as the 2006 Occupational Safety and Health Convention.

Initiated by the IndustriALL and UNI Global Unions, the regulations insist that all buildings vulnerable to minor or major cracks be inspected and recommendations put forth by engineers adhered to immediately.

“If necessary we will force factories (with defects) to shut down until standards are met,” Mohammad Shafiqul Islam, former president of the Bangladesh Garments Manufacturers and Exporters Association (BGMEA), the largest body in the business, told IPS.

In a cabinet meeting on Apr. 29, the Bangladesh government decided to form a committee tasked with carrying out regular inspections of factories, installing fire safety devices and ensuring that companies conduct regular fire drills for the workers.

According to a statement by the American Apparel and Footwear Association, the agreement has also won support from all major locals unions, which represent the roughly 3.5 million workers employed in over 5,000 factories housed in and around Dhaka, and in the port city of Chittagong.