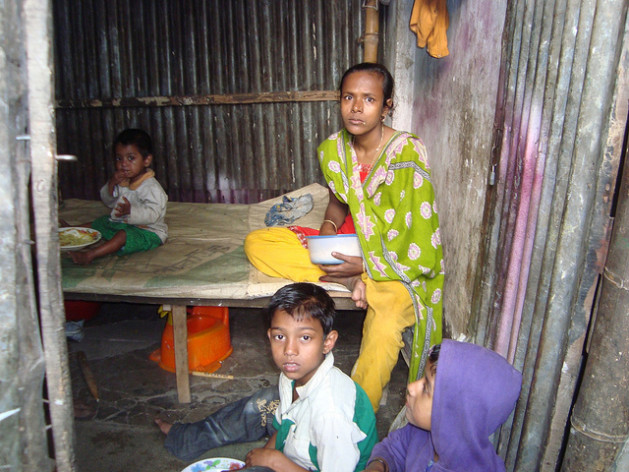 WASHINGTON, May 3 2013 (IPS) - Worker advocacy groups here are calling on some of the most high-profile U.S.-based clothing companies to make drastic reforms to their international labour practices in the wake of the factory collapse that killed more than 420 workers in Dhaka last week.

But critics say U.S. companies appear to be “meeting” these demands with increasingly creative ways to circumvent their core recommendations, by forming their own safety initiatives that rights groups say are essentially meaningless, or pulling out altogether to avoid the risk.

"What we see are token donations and empty promises that can’t be enforced." -- Scott Nova of the Workers Rights Consortium

“It needs to pay prices sufficient for ensuring compliance and needs to include worker representation so that worker voices on what they truly need are at the table.”

The collapse of an eight-storey factory building known as Rana Plaza was initially reported to have killed more than a hundred workers. As the week progressed and a major fire broke out, that figure quadrupled, setting off a public relations storm as human rights companies scrambled to identify the companies that sourced from the factory.

U.S.-based companies The Children’s Place and Cato Fashion have both been tracked as sourcing from the factory, but companies such as JCPenney, which sells European brands manufactured at the factory, are also under pressure from activist groups.

As critics strengthened calls for substantive changes in business practices to prevent another Dhaka tragedy, multinational companies responded this week with a flurry of press releases and attempts at deflecting blame.

“We did not have any ongoing production at the time of the incident,” Cato said in a statement.

The Children’s Place issued a similar statement, saying “none of our apparel was in production” there at the time of the collapse.

Activist groups also point to companies’ reluctance to sign onto a binding agreement known as the Bangladesh Fire and Building Safety Agreement as a lack of commitment to worker safety.

“The clothing brands’ insatiable hunger for lower prices and faster delivery by factories cultivates this deadly psychology in Bangladesh,” the Workers Rights Consortium (WRC), an independent monitoring group, said in a statement.

According to the WRC, the agreement would obligate participating companies to “open the doors of their Bangladesh factories to independent inspection and … pay for a country-wide program of renovations and repairs to make these buildings safe.”

The agreement, negotiations over which began in December 2010, needs four companies to become binding; so far, it has only attracted two.

One of the most notable instances of a prominent company bowing out of the negotiations was GAP, Inc., which owns GAP, Old Navy, and Banana Republic, among others. The company chose instead to create their own programme in October 2012.

Yet critics say that GAP’s alternative plan is inadequate. The plan carries no provisions about paying more to factories so they can abide by safety standards, for instance, and does not involve workers or unions in oversight and implementation.

Most importantly, the plan is voluntary and has no teeth for enforcing the measures. IPS contacted GAP for comment but did not receive a response.

Walmart, one of the largest retailers in the United States, denied a connection to Rana Plaza to IPS, but had been listed on the factory website, raising questions from activists. It has taken a similar route to that of GAP.

In an e-mail from the company’s international corporate affairs office, IPS was referred to a description of the store’s 1.6-million-dollar donation after the Tazreen fire in 2012 to establish the Environment, Health and Safety Academy in Bangladesh. The Academy would give “comprehensive training” on workplace safety to apparel workers.

Walmart also pointed IPS to a press release about the company’s “strengthening” of fire safety regulations in January 2012 in its factories.

Those regulations include “conducting regular fire drills, ensuring adequate number of exit routes and mandating fire safety training to all levels of factory management”, which critics say underscore a weak and inadequate commitment.

Missing from both GAP’s and Walmart’s plans is any mention of higher pay to suppliers to pay for safer buildings, which some critics say would be the first line of response if the companies were genuinely committed to the safety of their workers.

This is all just part of a “game” these companies play, Scott Nova, executive director of the Workers Rights Consortium, told IPS.

“These companies recognise they have to claim they’re doing something in order to avoid damage to the image of the brand, but they don’t want to have to do anything,” he said.

“So what we see are token donations and empty promises that can’t be enforced. They weather the public relations crisis and expect [the media spotlight] to fade.”