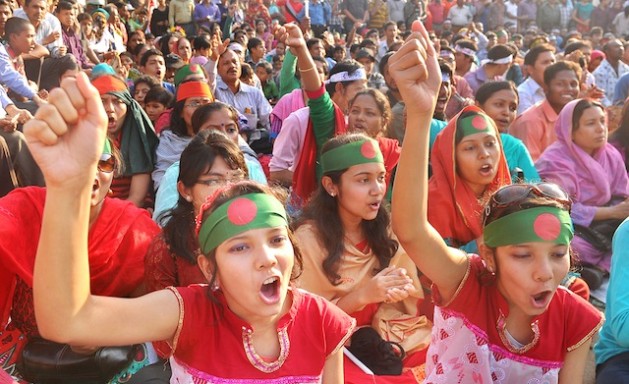 DHAKA, Mar 21 2013 (IPS) - “This is a revolution,” declares Mamtaj Jahan Halima, a young law student from Bangladesh’s southwestern Khulna district. “People of all ages, irrespective of religion, caste and culture have united – we have not witnessed such a peaceful uprising since before independence.”

Surrounded by thousands of protestors at a massive rally in the capital, Dhaka — a common sight in Bangladesh these days — Halima has travelled over 300 kilometres to come here in the hopes of adding her voice to a growing call to ban radical Islamist groups, hang accused war criminals and install a secular government.

Though they did not live through the 1971 liberation war – as the independence movement is known here – the young university students coming out in droves evoke memories of a glorious past, when the people of what was then East Pakistan rose up to overthrow the occupying West Pakistan military junta and establish an independent Bangladesh.

“Hang the War Criminals”, say the placards bobbing above a sea of heads in Shahbagh Square, the neighbourhood in Dhaka that saw the first wave of protests on Feb. 5, shortly after the International Crimes Tribunal handed down a sentence of life imprisonment – rather than the much anticipated death penalty – to Abdul Quader Mollah, charged with crimes against humanity during the 1971 struggle.

While the immediate demand of the peaceful, non-partisan movement — which in the last two months has spread to other cities around the country — is punishment for “war criminals”, the core issue holding the students and activists together is the call for a secular democracy in Bangladesh and a ban on religious fundamentalist groups like Jamaat-e-Islami, and its students wing, Shibir.

The largest opposition Islamic party in the country, Jamaat’s current leaders today stand accused of atrocities committed on behalf of the Pakistan army against the pro-independence movement in 1971.

Chanting slogans and marching alongside thousands of fellow demonstrators at the Shahbagh junction, Chaity Mazumder, the daughter of a martyred freedom fighter, told IPS, “Thousands of freedom fighters sacrificed their lives to build a secular nation and we vow to achieve (their) goals.”

Like the Arab Spring and the Occupy Movement before it, the Shahabag protests were sparked by a few hundred online activists urging people to take to the streets. Now, this new generation has declared it will wrest the country’s future from the hands of radical Islamists.

The Jamaat-e-Islami has long been enmeshed in Bangladesh’s political sphere. Following the assassination of the country’s first president, Sheikh Mujibur Rahman, on Aug. 15, 1975, Jamaat leaders began to spread their influence.

Today the Jamaat is a key ally of the main opposition Bangladesh Nationalist Party (BNP), founded by Ziaur Rahman who opened the door to radical Islamists in a bid to secure his position in 1975.

Extremist groups found an ideal base among scores of impoverished people struggling to survive in the fledgling nation, and not long after terrorist outfits emerged as a means of subduing the population.

“It was General Zia who gave licence to such extremist groups to operate,” Shahriar Kabir, a noted writer and human rights activist here, told IPS. “In an ordinance in 1976 Zia legalised 66 such pro-Pakistan Islamist parties.”

A slew of terrorist attacks over three decades include the aborted attempt in August 2004 to assassinate Sheikh Hasina, then leader of the opposition and current Prime Minister of Bangladesh; the killing of former Finance Minister SAMS Kibria; the May 2004 failed grenade attack on former British High Commissioner Anwar Choudhury; as well as a series of bomb blasts in public places that have killed thousands of innocent people, according to government sources.

“We have had enough of Islamist militancy,” said Tabbassum Ara Begum, a 20-year-old college student from the southern Barisal district. “We were silent observers for 42 years. Now we have a platform of ordinary people with common interests — it is time to unite and eliminate these anti-liberation forces,” she said.

Imran H. Sarker, the chief coordinator of the movement, told IPS that up to now militancy overpowered ordinary people because the movement lacked cohesion.

But today “we are stronger than ever before. We have non-violent youth power and we will build a new Bangladesh”.

Indeed, the call for a “new Bangladesh” finds echo in the minds of youth around this country of 150 million where poverty is hovering at 35 percent, the cost of living has more than doubled since 2000, youth male unemployment is on the rise and nearly 50 percent of Bangladesh’s primary school students drop out before they complete fifth grade.

An economist by profession, Moazzem attributed poverty to low education levels here, as well as the primary factor driving scores of boys and girls into the informal labour market.

While poverty has long kept millions silent on the issue of politics, the Shahbagh protests are changing that trend.

According to Poonam Chakraborti, a protestor who teaches in a private school, “Ordinary people have joined us in frustration over decades of dirty politics in the name of democracy.”

Scores of other protestors told IPS they were fed up with a political system that allowed the opposition to boycott parliamentary sessions, set fire to public buildings and vehicles, and create a climate of anarchy. Others expressed dissatisfaction with a society divided between only two parties, the ruling Awami League and the opposition BNP.

“The people in the streets represent the voters who will decide tomorrow’s rulers of the nation,” Chakraborti told IPS. “So Shahbagh (represents) a crucial turning-point in the country’s political system.”

Conservative estimates put the number of people at some of the largest demonstrations in Dhaka at about 300,000, while others say protests have drawn upwards of a quarter of a million.

Though largely ignored by the Western media, the scale of the protests has forced the political establishment to sit up and pay attention.

As Jharna Rani Das, one of the participating online activists, pointed out to IPS, “Many ruling and opposition party politicians (including members of the Awami League and the Bangladesh Communist Party), worried by our sheer strength, have already expressed solidarity with us.”

“This is a clear indication of a weakening of the old order — the louder we chant, the greater the cracks on the political dynasty.”