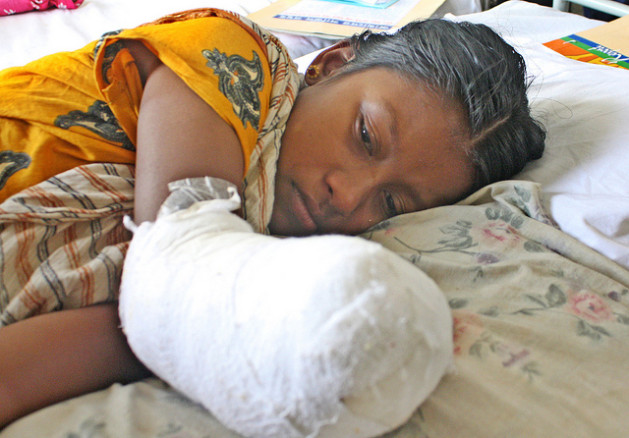 WASHINGTON, Jul 11 2013 (IPS) - An alliance of 17 major U.S. brands and retailers, including Walmart and the Gap, has unveiled a five-year agreement aimed at strengthening conditions and worker rights at garment factories in Bangladesh.

The new alliance, announced here in Washington on Wednesday, received cautious initial approval from some sectors. Yet the response from labour rights groups has been excoriating, with advocates particularly warning that the agreement’s enforcement provisions are too weak to ensure robust implementation.

“The so-called Global Alliance for Bangladesh Worker Safety was developed without consultation with workers or their representatives and is yet another ‘voluntary’ scheme with no meaningful enforcement mechanisms,” Richard Trumka, president of the AFL-CIO, one of the largest labour unions in the United States, told IPS in a statement.

“Companies that sign onto the alliance but fail to meet a commitment face no adverse consequences beyond expulsion from the scheme. Instead, workers will continue to pay.”

Indeed, according to a joint response by a half-dozen labour rights groups (not including the AFL-CIO) shared with IPS, companies that decide to withdraw from the alliance are only penalised by being forced to pay their share of administrative costs. For large companies, this would work out to around five million dollars – while Walmart alone brings in more than 400 billion dollars annually.

“For a company with billions of dollars in revenue, such a penalty is a minimal cost of doing business, not a serious deterrent,” the groups, which include the International Labor Rights Forum, the Worker Rights Consortium and others, stated.

“This confirms what labor rights advocates have long predicted: that Walmart, Gap and companies like them simply do not want to make any promises they actually have to keep. What they want is to be able to make promises now, at a time of major public and media scrutiny, that they can walk away from whenever it suits them, at a token cost.”

The creation of the new alliance follows a five-week process of negotiations among the companies and two and a half months after a factory collapse in Dhaka killed more than 1,100 people, the worst disaster in the garment industry’s history.

But the agreement also comes after nearly 70 other companies, primarily in Europe, agreed to support a new fire and building safety accord that has won widespread approval from labour groups. Nearly all major U.S. and Canadian companies refused to sign onto the accord, however, saying it would open them up to too much legal liability.

“The main … reason we couldn’t sign the accord, is Europe has a different legal environment than we do in the United States and Canada,” Jay Jorgensen, Wal-Mart’s senior vice president and global chief compliance officer, said at the public unveiling of the new agreement here on Wednesday.

“The accord had some provisions that under the U.S. and Canadian legal system would subject us to potentially unlimited legal liability and litigation … These companies here have put up around 146 million dollars so far to fix the situation in Bangladesh – we don’t want one dollar of that to go to lawyers; we want every cent of that to go to the factories.”

Under the terms of the new agreement, by October a common set of safety standards will be created for all factories producing products for alliance members. After one year, those factories will have to undergo an external verification process, by auditors chosen by the companies.

The alliance also says that worker empowerment will play a key role in its new approach, promising to institute, among other things, new worker representation committees. Yet critics point out that the alliance agreement makes no provision under which workers can refuse to do dangerous work.

Further, while an alliance hotline for worker complaints is to be set up by November, the European accord goes much farther, allowing workers to initiate enforcement proceedings.

Thus far, alliance members have pledged 42 million dollars to a worker safety fund, and have said they will provide more than 100 million dollars in capital for improving factory infrastructure. Those contributions are to continue for the next five years, though critics warn that this aspect of the plan is only voluntary.

Initially it had seemed as though the North American companies, in refusing to sign the European accord, would simply proceed with individual plans for remediation in Bangladesh and public relations elsewhere.

Yet as analysts were suggesting that Bangladeshi-made clothing might soon become taboo to consumers, in early June several of the largest companies here agreed to negotiations hosted by the Bipartisan Policy Center, a Washington think tank.

Over the past five weeks, these talks were led by two widely respected former U.S. senators, George Mitchell and Olympia Snowe. While both Wednesday offered their support for the results, the spectre of the European accord clearly remains foremost in many minds.

Yet he noted in closing: “My hope, and here I speak personally, is that the members of the alliance and the accord will one day soon make their efforts common to the extent possible. The criterion should be simply, what’s the best way to improve worker safety.”

Indeed, harmonising the two approaches appears to remain an important medium-term goal, at least for some. Also speaking Wednesday, Snowe noted that the new agreement was “designed to work in conjunction with the accord”, including though the establishment of a joint advisory board that “can hopefully align their goals”.

That sense is shared by some U.S. lawmakers, many of whom in late June withdrew lucrative trade concessions to Bangladesh – though not those that would impact on the massive garment industry, which is expected to be valued at some 21 billion dollars this year.

“The creation of the Alliance for Bangladesh Worker Safety is an important first step toward addressing the dismal plight of Bangladeshi garment workers,” Senator Robert Menendez, chair of the powerful Senate Foreign Relations Committee, said Wednesday.

“[But] North American and European retailers, which often source from the same factories, must now closely coordinate efforts on their various initiatives to ensure that there is a common unified safety standard going forward.”