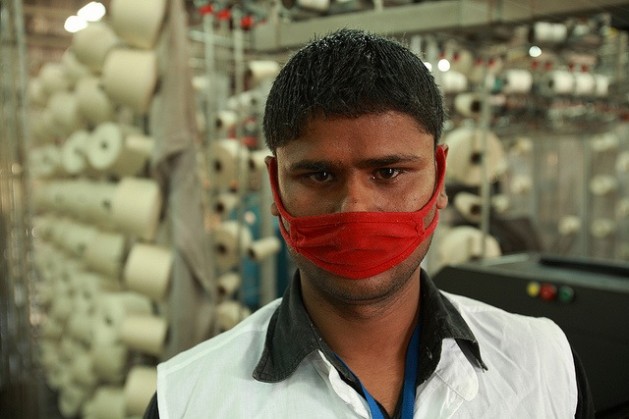 Garment worker at a Bangladesh factory. Credit: B A Sujan/Map/IPS

SYDNEY, May 25 2013 (IPS) - Australia’s largest textile workers’ union and activist groups are up in arms that the country’s leading retail chains, who source most of their fashion labels from Bangladesh, are refusing to sign a legally binding accord that will help to improve labour and safety standards in Bangladeshi garment factories.

“Companies that search the globe to find the lowest labour costs cannot claim ignorance (of) the consequences of that decision.” -- Michele O’Neil
As rescue teams pulled corpses and survivors from the debris in the town of Savar, about 25 kilometres from Bangladesh’s capital, Dhaka, they also found the charred remains of clothing labels bearing the names of major Western retailers like Walmart, H&M, Gap, Primark and many others who outsource their production to Bangladesh to avail themselves of cheap labour in the impoverished country of 150 million.

As a result, the proposed Bangladesh Building and Fire Safety Agreement requires companies to conduct independent safety inspections, make their reports on factory conditions public and cover the costs for needed repairs.

It also requires them to stop doing business with any factory that refuses to make safety upgrades and to allow workers and their unions to have a voice in factory safety.

Major Australian retail chains that source garments from Bangladesh, like Kmart, Target, David Jones and Big W, have not been connected with the Rana Plaza tragedy; but in the spirit of creating a global culture of ethical production, labour unions and rights groups like Oxfam Australia are urging them to sign the agreement.

According to their annual reports, Target Australia’s total revenue in 2012 was about 70 billion dollars, while Kmart, which runs 170 retail outlets across Australia, had revenues of roughly 3.8 billion that same year. Big W (a branch of Woolworths) increased their sales revenues by almost five percent last year to 53 billion dollars.

“Those companies need to (publicise) what they’re making in Bangladesh and they need to be completely transparent about their supply chain,” said Michele O’Neil, national secretary of the Textile, Clothing and Footwear Union of Australia (TCFU).

“This is important because it would allow independent verification of conditions by researchers, NGOs or unions who could visit the factory site and speak to the workers about wages, health and safety and other issues.”

She said it was “important that all Australian companies sourcing from Bangladesh” sign onto the accord, which gives workers the right to refuse dangerous working conditions.

It is possible that if the accord had existed prior to Apr. 24, the death toll would have been significantly lower: days before the disaster, huge cracks had appeared on the ceilings and beams of the building, which was intended to house just five floors.

Despite these clear signs, and warnings from engineers that a collapse might be inevitable, factory managers threatened workers with dismissal if they stayed away due to safety concerns.

Thirty international companies, including the Italian fashion brand Benetton, Spanish retailer Mango and British retailer Marks & Spencer, have so far initialed the binding agreement, along with other big names like Tesco and PVH (the parent company of Tommy Hilfiger and Calvin Klein).

In an angry email response to IPS’ queries, Kmart’s general manager of corporate affairs and sustainability, Tracie Walker, said, “We have not refused to sign the accord.” She referred IPS to the company’s “strong ethical sourcing code”, which is supported by “very stringent policies.”

Kmart says that none of the recent tragedies in Bangladesh occurred in factories that make clothes for them. The company says it organised a forum with its suppliers and auditors, and has also visited factories there.

“One of the key outcomes of the audit process was the identification of ‘high risk buildings’, which are those located above market places and factories located in multi-storey buildings with shared ownership,” the company noted. “Kmart no longer places orders with factories in these high risk locations.”

But activists like O’Neill do not believe that “brand-specific codes, self-regulation and private sector audits” will do the job, echoing activists in the U.S. who say refusals to sign the accord amount to admissions that companies “do not want to be held accountable for workers’ safety.”

According to O’Neill, only consumers have the power to force retail chains to sign the labour accord.

“The results of not having strong laws and unions is clear: look no further than Rana Plaza,” O’Neill noted in a statement on TCFU’s website. “Companies that search the globe to find the lowest labour costs cannot claim ignorance (of) the consequences of that decision.”

About 49 percent of Bangladesh’s population lives below the poverty line. Desperation drives many, particularly women, to seek work in one of the country’s 5,000 factories, taking on 10-hour shifts, seven days a week, in exchange for little more than 30 dollars a month.

Speaking on ABC national radio, Bret Inder, a development economist at Melbourne’s Monash University, said that Bangladesh has grown to be the world’s second biggest garments manufacturer precisely because it offers such a cheap workforce.

“Western buyers have been contracting out to producers all over, particularly in Southeast Asia and South Asia, moving from one country to the next (in search of) the cheapest labour,” he noted.

“There’ll be another country waiting in the queue if Bangladesh prices itself out of the market. To make an accord that is specific to Bangladesh doesn’t make any sense at all,” he added.

Others argue that Bangladesh is a special case that deserves targeted policies. Since 2005, at least 1,800 garment workers have perished in factory fires and building collapses, according to research by the International Labour Rights Forum.

The incident on Apr. 24, the industry’s worst disaster in history, came just months after a fire at a different factory, in November 2012, killed 112 workers.

Oxfam believes that the Better Factories Cambodia project, through which Cambodia gets easy access to U.S. markets in exchange for improved working conditions in the garment sector, may be a good model for Australia to follow.

“There have been international calls for garment companies to ensure they are paying factories enough to ensure workers (receive) a living wage,” notes Oxfam’s Gardener. “The Australian government can help educate Australian businesses about their responsibility to uphold the human rights of the people working in their supply chains.”

She added that the labour cost compared to the overall retail price is very small, sometimes just a few cents per garment, meaning Australian retail companies are able to pay their suppliers more without it having a significant impact on their bottom dollar.