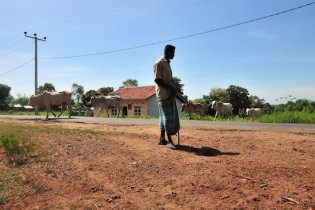 By Amantha Perera
Krishnaveni Nakkeeran has fled the country of her birth twice and returned twice in the last two decades. The 36-year-old mother of four from the northern Jaffna peninsula in Sri Lanka first fled the bloody civil war to India when she was just 16 years old in 1990.

By Amantha Perera
The fear was palpable for Mohideen Ajeemal when he heard the news of an 8.6 magnitude earthquake off the coast of Indonesia on Apr. 11. The last time an earthquake of similar magnitude hit the same area, Ajeemal lost two of his children, a young daughter and an infant son, when massive tsunami waves crashed onto his house on the eastern coast of Sri Lanka on the morning of Dec. 26, 2004.

By Amantha Perera
Most things in Sri Lanka are becoming expensive these days. In early February fuel prices were increased by margins ranging from eight to 49 percent, with the all-important diesel, used widely in commercial transport and power generation, going up by 36 percent. The Sri Lankan rupee that was trading at 107 rupees to the dollar in January surpassed 130 rupees per dollar last week.

By Amantha Perera
As the UN Human Rights Council (UNHRC) voted in, Thursday, a resolution asking Colombo to act on recommendations made by its own Lessons Learnt and Reconciliation Commission (LLRC), Buddhist prayers reverberated through the Sri Lankan capital.

By Natasha Pieris
On the eve of the Feb. 27 Human Rights Council Session in Geneva, during which human rights advocates had hoped the issue of alleged wartime abuses in Sri Lanka would finally be put to rest, the Sri Lankan government announced its appointment of a five-member court of inquiry to investigate laws of war violations during the first five months of 2009.

By Natasha Pieris
With the Feb. 27 session of the United Nations Human Rights Council (UNHRC) looming on the horizon, human rights watchdogs are making yet another push to get Sri Lanka onto the agenda – and once and for all settle the issue of alleged wartime abuses that the government continues to deny.

By Amantha Perera
It’s a new year, a new beginning but probably a harsher reality in Sri Lanka's former war zone. As the country enters its third year since the end of a bloody sectarian war that tore the nation's fabric apart, for many of the survivors of the worst fighting, a tough but true reality is dawning. Life in peacetime may yet be a hard struggle.

By Amantha Perera
Every weekend it has been the same ritual for so many months. Buying the newspaper, going through the classified and the employment sections inch by column inch, marking job offers that could offer a chance, even remotely.

By Amantha Perera
Seven years after monster waves crashed into homes, hotels and vehicles on Sri Lanka’s coast, people in this island nation continue to be haunted by demons from the sea.
ADVERTISEMENT ADVERTISEMENT