WASHINGTON, Feb 16 2012 (IPS) - With the Feb. 27 session of the United Nations Human Rights Council (UNHRC) looming on the horizon, human rights watchdogs are making yet another push to get Sri Lanka onto the agenda – and once and for all settle the issue of alleged wartime abuses that the government continues to deny. 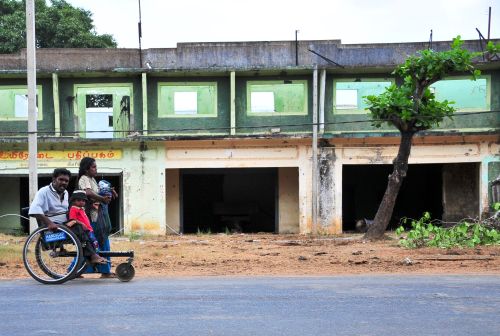 In a recent letter to UNHRC permanent representatives, members and observers, Human Rights Watch said, “Almost three years after the end of the military conflict between the Sri Lankan government and the separatist Liberation Tigers of Tamil Eelam (LTTE), the government has not kept its commitments to the people of Sri Lanka, the U.N. Secretary-General, and the Human Rights Council to undertake credible measures to provide justice and accountability for the widespread and serious wartime abuses.”

In fact, far from taking steps towards accountability, the Sri Lankan government has embarked on a process of intense militarisation of the formerly rebel-held areas of the North and East, which, according to local and international advocates, could be the death knell for any meaningful reconciliation process after the 30-year-long civil war.

An internal report circulated in early January by Sri Lanka’s National Peace Council notes that very little effort has been made to facilitate a transition from an environment of war to one of normal, civilian life.

A senior NPC policy advisor speaking under strict condition of anonymity told IPS that the main road from Jaffna to Kilinochchi is dotted with checkpoints every few thousand metres, outposts that hint at the level of control deeper inside those areas, where the military has become the dominant institution of both civil and political life.

By various NGO estimates, 35,000 Sri Lankan troops are still stationed in Jaffna alone, overseeing a population of 626,000 people – roughly one soldier to every 18 citizens, including women, children, the elderly and the sick.

“Even in the most interior villages it is impossible to walk or travel by motorbike for even five minutes before seeing, encountering or being stopped by a soldier,” Ruki Fernando, head of the human rights in conflict programme at the Law and Society Trust in Colombo, told IPS.

“The presence of military personnel is very different in Colombo, where they are mostly hailed as war heroes. But in the North and East, civilians are forced to walk among soldiers who bombed their homes and villages, killed their family members, abducted their loved ones and engaged in physical and sexual abuse – this is hardly a recipe for reconciliation,” he added.

It is a widely acknowledged fact that a necessary part of human healing is the expression of grief. But in the North and East, the military has rendered collective grieving virtually impossible by tearing up graveyards thought to contain fallen Tigers, buried amidst civilian remains; razing memorials to the ground and paving over historic battle sites where once school children had laid flowers and lit candles for their martyred parents.

Having lived for 30 years under the LTTE’s steel-toed boot, Tamil civilians had hoped that the war’s end would bring a chance to eke out a living and rebuild their lives, but the military’s omnipresence appears to be stifling every possibility for the largely impoverished population.

“The army is blatantly obstructing people who are trying to develop themselves economically by taking over a range of commercial establishments and sectors,” Fernando said.

The NPC and the Law and Society Trust – both well-respected human rights defenders – have extensive documented evidence of the army’s creeping presence in the economy, including scores of army-run restaurants alongside major highways; military-owned farms, souvenir shops and grocery stories; navy control over fishing and the transportation of food as well as the civil-military coordination website listing “tourism” as one of its primary services.

Even more troubling, according to NPC, is “the appropriation of land in Kilinochchi, Mullaitivu and Vavuniya for agricultural purposes; the presence of soldiers at all civilian activities, including temple or church meetings; and family gatherings such as weddings, naming of a child and even funerals requiring prior permission from the nearest police post.”

By the defence ministry’s own admission, a new security forces complex complete with air-conditioning and conference halls was built at the princely cost of 40 million rupees (roughly 360,000 dollars), even at a time when funds for refugee relocation, humanitarian aid and livelihood development have been virtually bled dry.

The International Crisis Group recently carried out an in-depth study on the particular impact of militarisation on women, who occupied an unusual social space during the LTTE’s three-decades-long reign and are now bearing the brunt of the post-war nightmare.

Many women and young girls became hardened cadres, forming the ranks of the LTTE’s female wing, Birds of Freedom. Others rose swiftly to the head of tens of thousands of households, as men and teenage boys were absorbed into the Tiger’s armed forces.

“That women must (now) rely on the military for everyday needs not only puts them at greater risk of gender-based violence, but also prevents them from building their own capacity within communities,” the ICG report said.

“Fear of abuse (at the hands of the army) and the reassertion of patriarchal norms within the Tamil community have further restricted women’s movement and impinged on education and employment opportunities,” said Robert Templer, Crisis Group’s Asia Programme director.

The LTTE spent years developing a complex and coercive centre from which to dictate civil and political life. While its collapse is doubtless a blessing for thousands of civilians, “the devastation of the final year of war and the replacement of the LTTE in effect by the military and its proxies negate the gains for these communities,” the report concluded.

“All of this is very harmful to reconciliation,” Fernando told IPS. “How can people move on when the harassment and language discrimination that led to the conflict in the first place is ongoing? When you are not allowed to farm or cultivate? When children are disappeared and their mothers are left without a trace?”

“While many people around the country are celebrating the end of the terrorist threat, people in the North and East feel that nothing has changed, except the uniforms of the armed forces who are controlling their lives – in reality, they are still living under a military occupation,” he concluded.

*This is the first of a two-part series on Sri Lanka in the aftermath of its three-decade civil war.