WASHINGTON, Feb 16 2012 (IPS) - On the eve of the Feb. 27 Human Rights Council Session in Geneva, during which human rights advocates had hoped the issue of alleged wartime abuses in Sri Lanka would finally be put to rest, the Sri Lankan government announced its appointment of a five-member court of inquiry to investigate laws of war violations during the first five months of 2009. 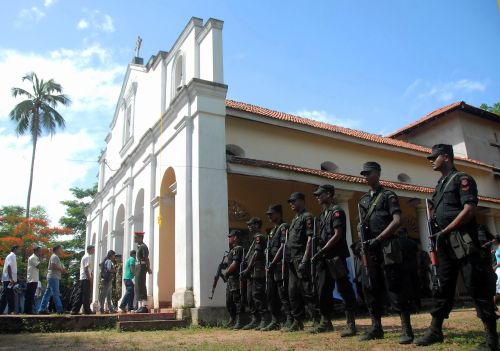 Soldiers at the funeral of a man who was fatally shot during a protest of the government's pension scheme. Credit: Amantha Perera/IPS

The events and aftermath of the final stages of the Fourth Eelam War, the battle that finally brought an end to Sri Lanka’s 30-year-long conflict with the separatist Liberation Tigers of Tamil Eelam, have been ferociously controversial, both nationally and in the international arena.

Sources like U.N. spokesperson Gordon Weiss, informed by real-time bulletins and post-war reports from grassroots agencies, doctors, survivors and international NGOs operating in the country’s northern and eastern warzone, posit that the war ended in a “conflagration of grenades and gunfire”, killing tens of thousands of civilians and leaving hundreds of thousands shell-shocked, maimed and homeless.

The Sri Lankan government, meanwhile, insists that it performed a “No Civilian Casualties” humanitarian operation in the last days of combat during which it rescued countless Tamil civilians from the clutches of the Tigers and ferried them to safety in government “welfare camps”.

Backed by allies such as Iran, Burma, Libya and China – the latter of which plied Sri Lanka with over a billion dollars worth of aid and military hardware between January and May 2009 – the Sri Lankan government has, for the last three years, managed to stall U.N. Security Council resolutions and ignore the recommendations put forward by the U.N. panel of experts’ fact finding mission in Sri Lanka, deferring instead to its own Lessons Learned and Reconciliation Commission (LLRC) to establish a roadmap towards justice and accountability.

“This government has a long record of setting up commissions and not implementing their recommendations,” Elaine Pearson, deputy director of the Asia Division at Human Rights Watch (HRW), told IPS.

Given that the end of Sri Lanka’s civil war was “one of the worst episodes in U.N. history – including failure to even table a discussion while the abuses were taking place – the HRC really must take this forward,” Pearson added.

She stressed that the U.N.’s decision to respond relatively quickly to the Arab Spring, even in highly controversial cases like Libya and Syria, suggests that bringing Sri Lanka back into focus would be not only timely, but also essential in the spirit of justice for the victims of war and for the sake of consistency in international standards.

However, “The Sri Lankan army’s announced inquiry appears to be a transparent ploy to deflect a global push for a genuine international investigation, not a sudden inspiration nearly three years after the war,” Brad Adams, Asia director at HRW, said in a press release Wednesday.

“This inquiry, coming on the eve of a possible Sri Lanka resolution at the Human Rights Council, looks like yet another cynical and meaningless move,” he added.

Various human rights groups have also expressed incredulity at the fact that Lt. General Jagath Jayasuriya – the man responsible for commanding all security forces in the Vanni, a region that weathered intense fighting during the last stages of the war – was in charge of appointing the army court of inquiry.

“An inquiry appointed by the commander who oversaw and was a colleague of senior officers who might themselves have been implicated in serious abuses cannot possibly be expected to be an independent and impartial finder of facts,” HRW said.

Yet this process is indicative of a larger, much more insidious trend in Sri Lanka today, where, despite a so-called declaration of peace, the presence of the army in nearly every aspect of civil and political life in the former warzone has raised the ire of the Tamil people and a slew of human rights organisations across the country.

The North and East remain the only places where former military personnel hold key government posts, including that of governor and government agent – the highest-level district officer in the country.

Many rights advocates believe it is a “shame” to see Sri Lanka’s once-proud civil service fall piece by piece into the army’s hands.

The government insists that these measures are both necessary and temporary. Earlier this year, Defence Secretary Gotabaya Rajapaksa proclaimed that troops “are maintaining an absolutely essential presence” throughout every district in the country.

He added that the government has accomplished unprecedented post-war development and should be lauded for its efforts rather than chastised as “human rights abusers”.

But voting patterns in the Tamil community ever since the war’s end suggest that roads and water wells matter less to a politically disenfranchised people than personal dignity and a political voice.

Though well over 70 percent of the island turned up at the ballot boxes for the January 2010 presidential election, only 18 percent of registered voters in Jaffna made the trip to the polling stations.

This was largely chalked up to the fact that scores of Jaffna residents had fled during the war or were incommunicado in the government “welfare camps”. But every subsequent election since then suggests that the Tamil people are hungering for political representation.

Despite a dearth of election promises beyond land, language, resettlement and self-determination, the Tamil National Alliance (TNA) have won everything from parliamentary elections to pradeshiya sabha (local government) elections since 2010, Ruki Fernando, head of the human rights in conflict programme at the Law and Society Trust in Colombo, told IPS.

“Unlike the government, the TNA did not have the capacity to promise a massive development programme – yet the Tamil people voted for them, proving that they cannot be bought over by schools, buses and hospitals. Their votes have been an absolute rejection of the Mahinda Rajapaksa regime. In elections that the government itself declared to be free and fair, this government was fairly and squarely beaten (in the North and East),” Fernando added.

In essence, the TNA has been all but stripped of its political efficacy by the presence of the military, which answers to a higher power than the will of the people.

*This is the second of a two-part series on Sri Lanka in the aftermath of its three-decade civil war.