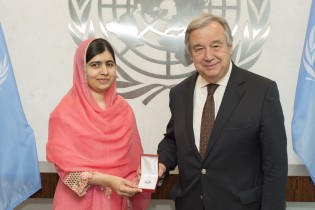 By Tharanga Yakupitiyage
Pakistani education activist Malala Yousafzai has become the youngest UN Messenger of Peace with a special focus on girls’ education.

By Kanya D'Almeida
There was a time when images from war zones featured only battlefields and barracks. As warfare moved into the 20th century, pictures of embattled urban centres and rural guerilla outposts began to make the rounds.

By AJ Correspondents
The Pakistani government has offered a Rs10 million (105,000-dollar) bounty for the capture of the Pakistani Taliban assailants who shot Malala Yousafzai, a teenage rights and education activist in the northwestern Swat Valley, officials say.
ADVERTISEMENT ADVERTISEMENT