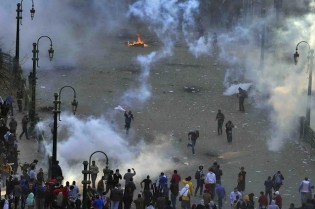 By Adam Morrow and Khaled Moussa al-Omrani
Since the second anniversary of the uprising that ended the Mubarak regime, Egypt has witnessed a spate of political violence. Egypt's opposition led by the high-profile National Salvation Front (NSF) blames President Mohamed Morsi for the bloodshed, but many blame the NSF and its leaders.

Following Monday’s announcement of the death of long-time Ethiopian leader Meles Zenawi, Ethiopian civil society leaders and Western rights groups are characterising the turn of events as an opportunity to heal decades of increasingly stark sectarianism.

Cambodian Opposition Plans to Wake Up

By Irwin Loy
Cambodia’s fragmented opposition parties are promising to work together, rather than compete against each other for votes in the next election. All it took was another crushing victory at the polls by the country’s ruling party.
ADVERTISEMENT ADVERTISEMENT